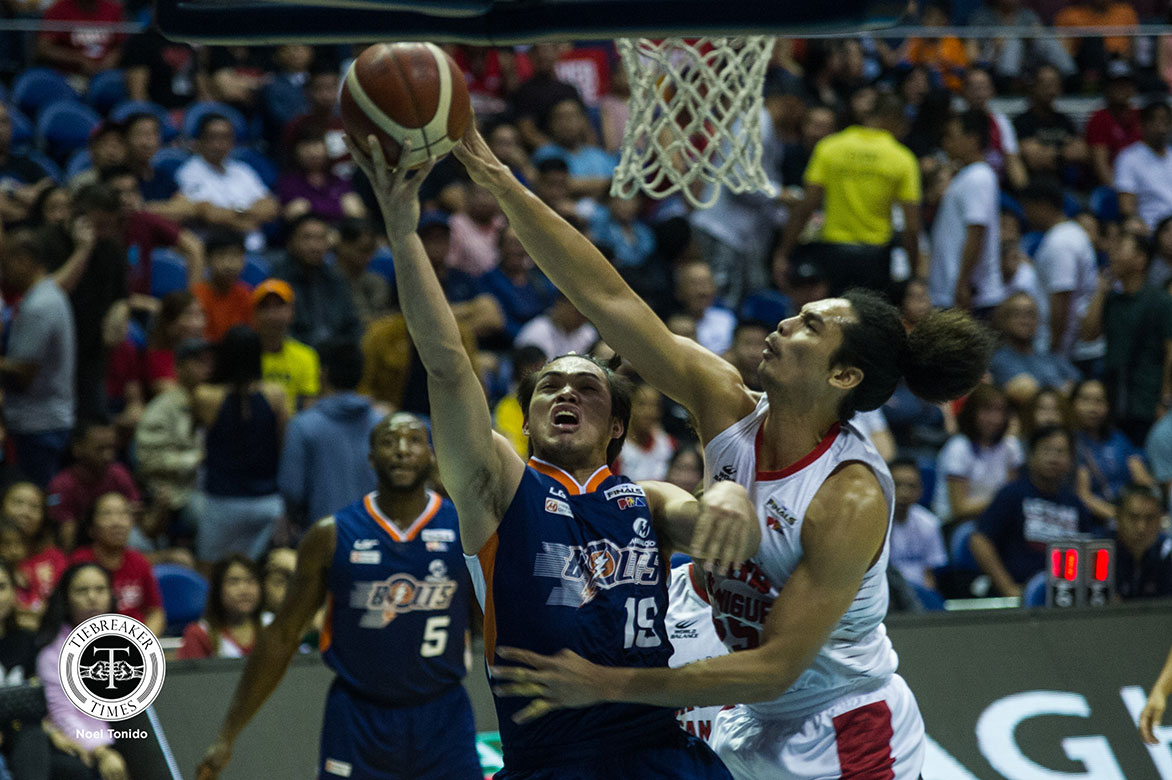 The Gin Kings had one less problem to face when the 6-foot-8 forward went down with an apparent knee injury just six minutes into the match after landing on LA Tenorio as he went up for a shot.

The Barangay then exploded come the third quarter behind Stanley Pringle, so much so that it led by as many as 23, 78-55, following Greg Slaughter’s bucket with 23 seconds remaining.

But the Bolts slowly chipped away the deficit come the payoff period, and Allen Durham’s three-point play conversion sliced the deficit to just five points, 87-82, with 2:04 on the game clock.

LA Tenorio, though, drilled a three-pointer with 1:47 to go to widen Ginebra’s lead to eight. Chris Newsome still tried to keep Meralco afloat with a tough mid-range jumper.

However, the beginning of the end for the Bolts unfurled afterward. Ginebra forced a shot clock violation, and Japeth Aguilar made his lay-up off a pick-and-roll that settled the final count.

“Huge,” said coach Tim Cone of Almazan’s absence. “At the half, I said this is the time for Japeth and Greg to make a lot of forays into the paint and get some seals with Raymond out.

“It’s a big difference. I mean, it was what, a one-point game at halftime then he went out, early in the third, and we end up beating them, we got up by twenty points. But we hope he’s alright,” he added.

Brownlee led the Barangay with 24 points, nine rebounds, and nine assists. It was the most dimes he had in this series so far after having just one in Game One and none in Game Two.

“Coach had a talk with me and told me and I didn’t have any assists — oh, one assist the past two games … I really wanna focus on getting guys going, trying to get guys open looks,” he said.

Pringle continued his stellar play this series with 21 points, five rebounds, and four assists while LA Tenorio chimed in 11 markers as four of the five starters finished in double figures in the win.

“We kinda got our game going tonight,” offered Cone, who’s gunning for his 22nd PBA championship. “This is the kind of way we play. We’re able to get some stops and get in the open court.”

Meralco was led by Chris Newsome with 24 points, 20 of which came in the first half alone as he did his best to keep the Bolts afloat while dealing with the absence of Almazan.

Durham had 23 points, 18 rebounds, and seven assists as Bryan Faundo added 10 markers off the bench in the loss.

“I don’t know how much they were affected by the news, but it seemed to affect them going to the third,” said coach Norman Black, referring to the impact of losing Almazan on the team. “Ginebra did a good job of jumping on top of us immediately, taking advantage of it, and taking control of the game.”

Game Four of the best-of-seven series is on Wednesday, January 15, 7:00 p.m. still at the SMART Araneta Coliseum.