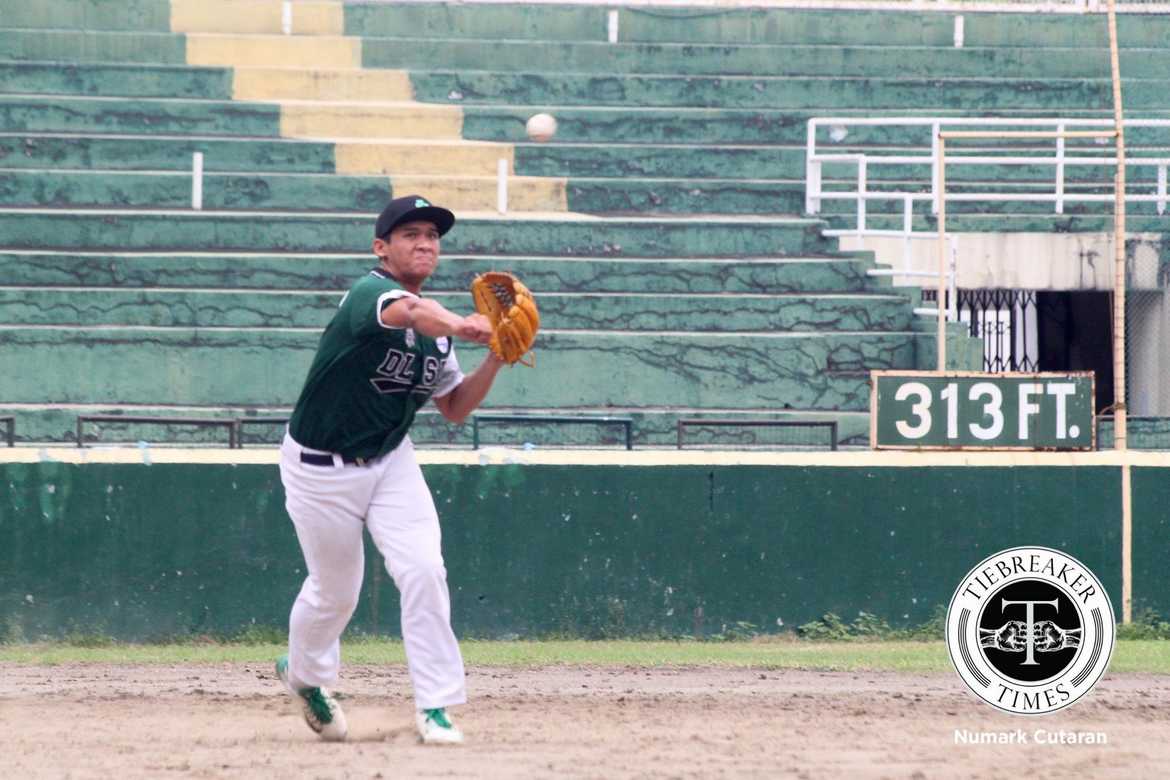 Another sophomore steps up for the De La Salle Green Batters.

Gesmundo struck out the top of the UST batting order to start off the game. However, after a walk of the second inning’s first batter Christian Mercado, Mercado was able to gain home base after a passed ball to put UST up 1-0.

The Green Archers threatened to put up a run during the third inning behind rookie Antonio Francisco. With one out, the rookie from De La Salle-Zobel was walked due to balls by UST’s rookie pitcher Jackson Acuna. Francisco was able to then move to third base after a sacrifice fly by Francisco Hashimoto and a base hit by Francis Salud. However, a flyout of Diego Lozano at left field stranded the two runners to end the inning.

However, the inevitable happened during the fourth inning. Third baseman Boo Barandiaran started the inning with a double while Ignacio Escano was walked. A wild pitch by Acuna gave Barandiran the tying run. Sophomore Jonathan Park connected with a base hit to again give La Salle two bases. Gab Pineda then hit  a sacrifice fly to left field to bring home Escano. After another walk by Acuna against Paul Naguit, Jeffrey Santiago and the UST staff retired Acuna for the game and was replaced by Kirk Daquis.

A flyout off a foul ball by Francisco gave UST two outs but a single by shortstop Hashimoto brought home Park. The final run gave La Salle a 3-1 lead to end the inning.

#ReadMore  Kevin Belingon not giving up on Bibiano Fernandes pentalogy

Seeing that the hits of the Green Batters were all going to the outfielders, Jeffrey Santiago adjusted his outfielders to the outside.

Fortunately for the Green-and-White, Gesmundo and the La Salle fielding held their own on defense. Gesmundo allowed four hits during the first six innings of the game but left all of them stranded in accumulating 13 strikeouts.

In the seventh inning though, fatigue had set in for the sophomore. After one out, Max Mercado, relieving for Don Santiago, was walked. After a flyout of the next batter, Daquis connected with a long fly to right field to that brought home Max Mercardo to cut the deficit to just one run to end the inning.

Gesmundo was then retired on the mound and was replaced by Arvin Herrera to close out the game. Herrera hit first batter Peralta to start off the eighth inning. The defense though was able to recover later on with a huge 8-6-3 double play that knocked off the next two batters while Peralta was tagged out after a rundown.

The Green Batters were able to seal the game with a 1-2-3 including a strike out of Arcel Aligno to close-out the game.

Looking forward to the final three games of the season, Orillana is planning to develop team chemistry for the Green Batters to better prepare them for the grind of the Finals. “Kumuha pa ng panalo at siguraduhin namin yung laro against Adamson,” he said. “And then the rest fix the line-up kasi ang habol namin is ma-balance yung first stringer sa second stringer.”

The DLSU Green Batters face the Adamson Soaring Falcons (3-4) in their next outing on Sunday, February 26 in the last game of the day. On the other hand, the UST Golden Sox look to break out of their funk against the NU Bulldogs (3-4) in the second game at 11:00am.