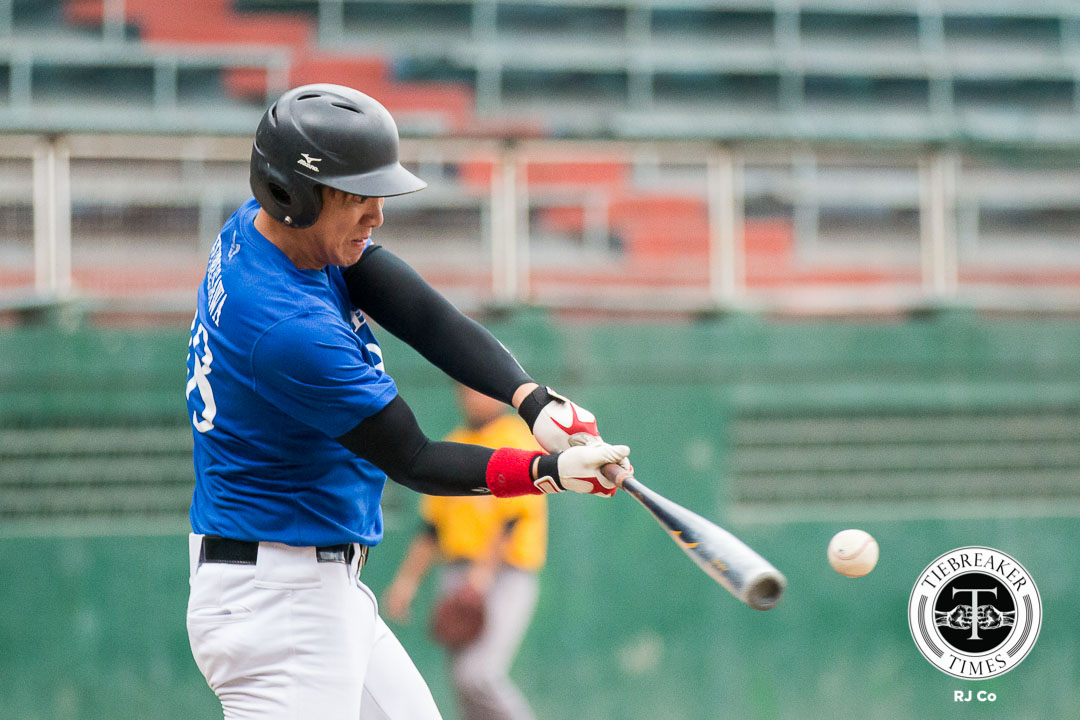 After suffering their first loss of the season, the Ateneo de Manila University Blue Eagles, led by Filipino-Japanese rookie Kai Furusawa, overpowered the University of Santo Tomas Golden Sox 6-3 to open their second round campaign. However, off-field issues plagued the two-time defending champions that affected their performance in the diamond.

The Ateneo defense was clicking in the first three innings of the game. Starting pitcher Paulo Macasaet allowed no hits during that frame while the batters he walked were easily knocked off by the infield of Ateneo. With frustration building up and to try and push his players, UST head coach Jeffrey Santiago threatened to walk out of the game during the bottom of the third inning due to a missed strike call. Fortunately, cooler heads prevailed as officials calmed the veteran coach down and play resumed.

After three hits in the first two innings, the Blue Eagles were finally able to breakthrough at the top of the third inning. With one out, second batter Javi Macasaet gained base after a UST fielding error. Fellow rookie Kai Furusawa brought Macasaet home with a single to put Ateneo on the board. A fielders choice with Gino Tantuico batting knocked-off Dio Remollo at second base but gave Furusawa home. Chong Ramos, who was been on fire the past three games, connected with a powerful double to right field for an RBI to give Ateneo a 3-0 lead.

In the bottom fourth inning, National Team player Paulo Macasaet struggled to find his timing. The 20 year old pitcher gave up three walks in the inning but no one reaching home base. Prior to gaining the third out for the inning, Macasaet went for a breaking ball that was way short that drew the ire of Ateneo baseball program director Randy Dizer. “If you throw that pitch again, I’ll throw you out,” Dizer said to Macasaet.

As the inning ended, Macasaet tried to explain himself to Dizer on the bench but he had none of it. Coach Randy immediately called for Miguel Dumlao to warm-up that forced “P-Mac” to retire from the game. “Actually, we’d take the win pero the way they played, naiba yung rotation sa pitching, positioning because may mga attitude problem,” Dizer told Tiebreaker Times. “Nagkaroon ng problema then [they’re] questioning my decision, I don’t want it that way. Nakita mo, I kicked them out.”

Ateneo was able to pick-up one more run in the fifth inning after two consecutive doubles by Furusawa and Remollo that brought home the former. With Kirk Daquis struggling from the mound, Santiago relieved him of pitching duties for senior Arcel Aligno.

The Growling Tigers were able to get on the board during sixth inning. First batter Jayrome Kimilat connected on Dumlao to open the bottom end of the inning. After a flyout of the next batter, a throwing error by third baseman Ryon Tionloc and later on by Orbeta gave Acuna base and Kimilat home. A single by Christian Mercado paved the way for an Acuna run to cut the Ateneo lead to just two runs.

“Yung win na ito is pangit. Ilan beses kami nahulihan and base running,” Dizer said about the team’s careless errors in the game. “They’re not there. Maybe coming from that loss pero I’ll take it.”

Chong Ramos gave the Blue Eagles the insurance runs they needed to secure the win during the eighth inning. With one out, Ramos connected on his second double of the game and was brought home by Filipino-American Ryan Hilario in the next play. After a ground out of the next batter, Marquis Alindogan connected on his only hit of the game that brought home pinch runner Johnny Altomonte.

#ReadMore  Mark Dickel disagrees with Chot Reyes: 'Gilas coach should be most qualified'

Errors again marred the Blue Eagles in the final inning that led to a run for Aligno before they finally closed out the game with a Nacho Lozano strikeout of Lesmar Ventura and groundouts of Kimilat and Gonzales.

Looking forward to the team’s three day break, Dizer plans to eliminate the “bad habits” of the team in saying, “I need to incalcate in them that this is a team.They have to follow the coaches. Hindi puwedeng ikaw lang. Hindi puwedeng may superstar sa team. They have to complement with each other and play as a team.”

Kai Furusawa played his best game in his young UAAP career in going 4 of 5 at bat. He had three singles and a double that led to two runs and an RBI. Chong Ramos went 3 of 4 as well, a single and two doubles, for a run and an RBI.

The Ateneo Blue Eagles face the NU Bulldogs on Thursday, February 25. “They are now two games down. We’ll meet them next Thursday and if we beat them, we get to the Finals then let’s see,” Dizer said regarding the pivotal game. On the other hand, the Golden Sox face the DLSU Green Baters on the same day.