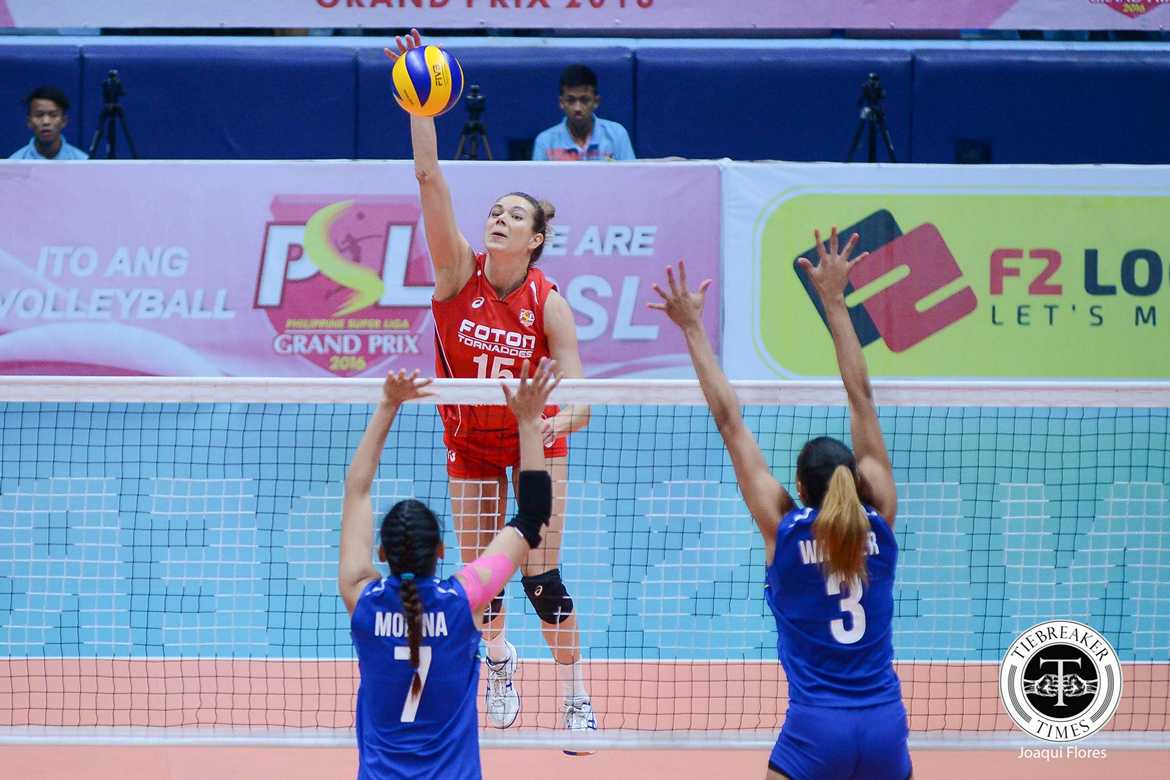 As dominant as they were in the elimination round, Foton have been involved in classics recently.

Foton tried to mount a similar rally in the second frame as they were down 16-20. But again, they had their momentum stopped after Jaja Santiago suffered a right ankle sprain, allowing Petron to grab another set.

Along with Santiago, Foton’s usual fire and execution returned in the third set. Imports Lindsay Stalzer and Ariel User took turns powering the Tornadoes, eventually leading their team out of a 15-all deadlock to a 22-18 advantage. Petron managed crucial points to get within two, 21-23, but the Tornadoes managed to retaliate immediately and force a fourth set.

Both teams pulled to a near stalemate in the fourth frame. Petron, however, ran into an offensive wall that pinned them to 17 points, while Foton fed the blazing Lindsay Stalzer to cruise to a decider.

Petron then got off a promising start in the final set, going to Niemer in transition plays to put up an 8-3 lead. Foton, however, vaporized that cushion as Petron struggled to find offense with Niemer rotating to the back row. Stalzer scored four times in an 9-0 run, pulling Foton ahead 12-8. Petron ended up scoring just one more point, closing the match.

“I think we just got over our nerves. I don’t know why we were nervous but I’m glad we were able to get over that hump. Petron is such a good team and we’re definitely gonna need to start better in Game Two if we want to win,” said Stalzer, the reigning MVP who tallied 30 points. Usher added 19 points.

Stephanie Niemer broke the 30-point barrier for the third time this season, tallying 32. But she was the only Petron player who managed to carry the offense.

Game Two is on Saturday, 5:00 pm, at the PhilSports Arena.