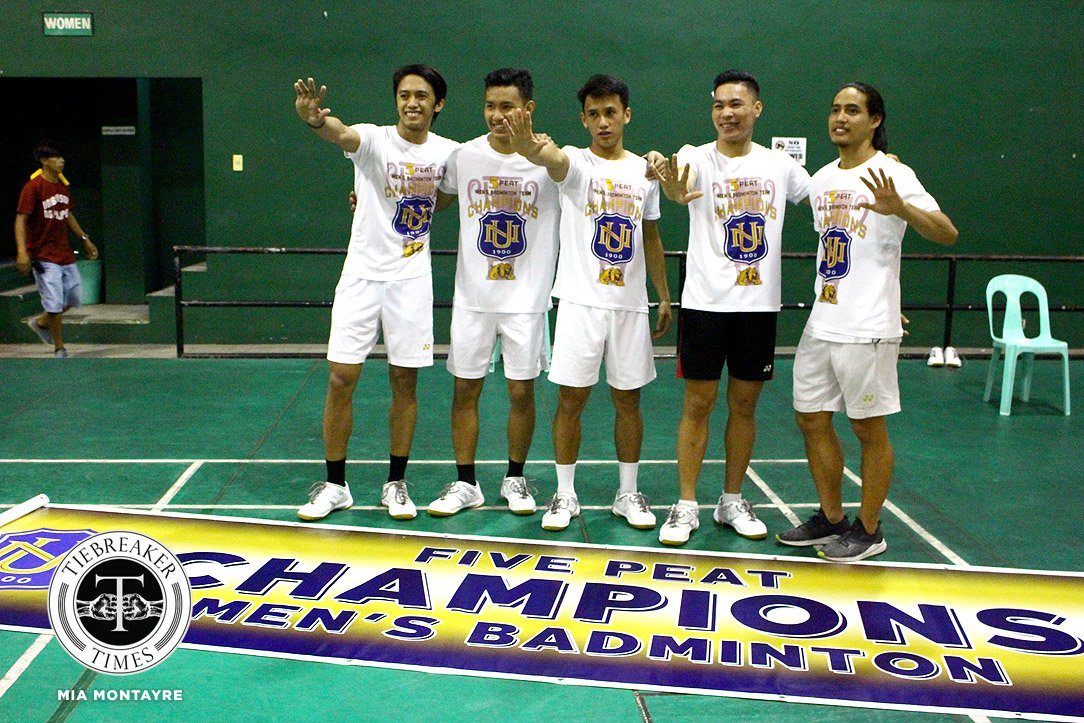 And thus Morada and three of National University’s graduating seniors played all-out and needed just three matches to take their 43rd straight win and secured the fifth-consecutive UAAP title past the University of the Philippines Fighting Maroons, Friday morning at the Rizal Memorial Badminton Hall.

Just like the previous Season’s Finals, the crucial opening match went the way of the Bulldogs as former MVP Ros Pedrosa made amends this time, taking down fourth-year Maroon JM Bernardo.

Keeping the UP lead man at bay, the graduating Pedrosa clawed out of an 8-all deadlock to lead at 11-8 after a series of errors from the former. The Bustillos-based shuttler then responded to the challenge of his opponent to slowly inch away to the game win at 21-17.

In the second game, Pedrosa ran roughshod on Bernardo and gave the latter a dose of his own medicine after taking a huge 10-0 spread at the start. The Maroon tried to keep in step and came within six, 9-15, but the lead was just too much even for a skilled singles player. NU took the tie advantage at 21-14 in the second.

The second singles match was a showcase of skills for eventual-MVP Mike Minuluan. The other graduating senior covered the court well, taking Michael Clemente out of his game. It was Minuluan who came out victor in the battle of length. Using a combination of speed and power, the NU standout cruised to a 21-12 win in the first game.

Clemente started well in the second frame, taking it at 8-all, but when Minuluan piled up the points, there was no turning back. His win sent the Bulldogs to the cusp of yet another UAAP crown.

With two seniors on deck for the doubles match, it was just a matter of time before the Bulldogs get it done.

Morada and Alem Palmares made quick work of Harvey Tungul and the lone graduating senior from UP Betong Pineda in the first frame at 21-15. Calm and composed, the Bulldogs were unstoppable in the frame, leading by as much as seven, 19-12, after a close score line at 11-10 at the break.

Another close start ensued in the second game, with NU taking another tight 11-10 lead at the interval. Nonetheless, just like in the opening set, Morada and Palmares just knew when to turn it up. Down three, Pineda tried to prolong his UAAP career and UP’s season, but his shot failed to clip the line, sending the crowd from Sampaloc into a joyous frenzy.

After the win, Morada was lost for words.“Sobrang saya lang po kasi pinaghirapan talaga namin to.