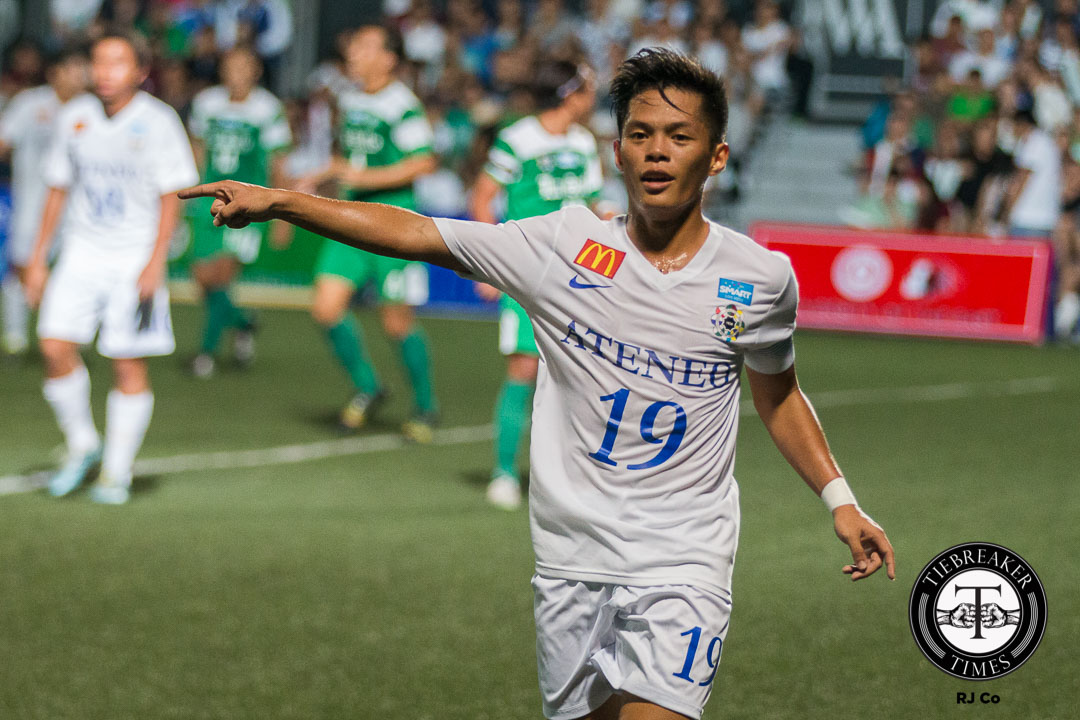 In the opening week of the season, the Ateneo Blue Eagles find themselves in an unpleasant position. Without a win or even a point to their tally, the Ateneans are determined to make up for lost ground by grinding out results as soon as possible. An influential figure in the side, skipper Mikko Mabanag believes their fortune can become better if they stay more focused and fight from start to finish.

As it stands, the Blue Eagles are dead last after two and a half rounds of UAAP men’s football action. They share the last spot with Adamson, but the Falcons own a slightly better goal difference. Just two games into the season, there is still a long way before the elimination round ends. Mabanag, nonetheless, is aiming for the team to respond strongly sooner rather than later. “Ito na talaga ‘yung last na talo. If you have to fight for the championship, you can’t keep on losing,” the captain voiced out. Last season, the Ateneans barely squeezed their way into the semifinals. Against fellow Final Four squads, they only managed to collect six out of the available 18. Simply matching that would definitely make things harder for them this year.

For them to avoid slipping further into the abyss, Ateneo must simply get results. A huge factor in achieving that is channelling the renowned ‘One Big Fight’ into their game. So far, there have been few flashes of the team’s competitive character in both games. Yet, it has not been enough for them to see out results. “Pinakita naman namin na kaya naming lumaban pero kung pinakita namin na kaya naming lumaban in 90 minutes, something may happen. Something better,” the fifth year midfielder suggested.

Another important aspect that goes hand in hand with the fighting character is the team’s ability to retain focus. Having played against two championship contenders so early in Season 78, the Blue Eagles experienced a lot of tension both on and off the field. Mabanag conceded that there will always be distractions, but it is up to them to muster composure to deter such. “Sinasabi ko as teammates ko na focus lang tayo palagi. That’s what we sometimes lose. Iyon ang pinakamalaking chunk ng game na nawawala sa amin lagi,” the Ateneo High School alum observed.

Expressing the need to solve the issue, Mabanag remains hopeful that they will overcome this difficult period. One of the positives where they could build on into their next games is the emergence of blue-chip rookie Jarvey Gayoso. The newcomer netted his first two goals for the Blue Eagles in their most recent game. In spite of losing the game, the captain is convinced that one of his newest teammates will help them a lot this year. “In my five years in Ateneo, our problem is wala kaming [genuine] striker. Then Jarvey showed up. Iyon ‘yung kailangan namin,” Mabanag stated. Having witnessed him break the duck, the veteran playmaker firmly believes in Gayoso who may well become one of the league’s best players in the future, if not now.

The Blue Eagles are hoping that third time’s the charm tomorrow evening as they prepare for a clash against fellow strugglers Adamson. Having won against them twice last year, it may well be the perfect match for Ateneo to get themselves back on track ahead of a challenging season. The encounter will kick off at 7PM at the McKinley Hill Stadium.