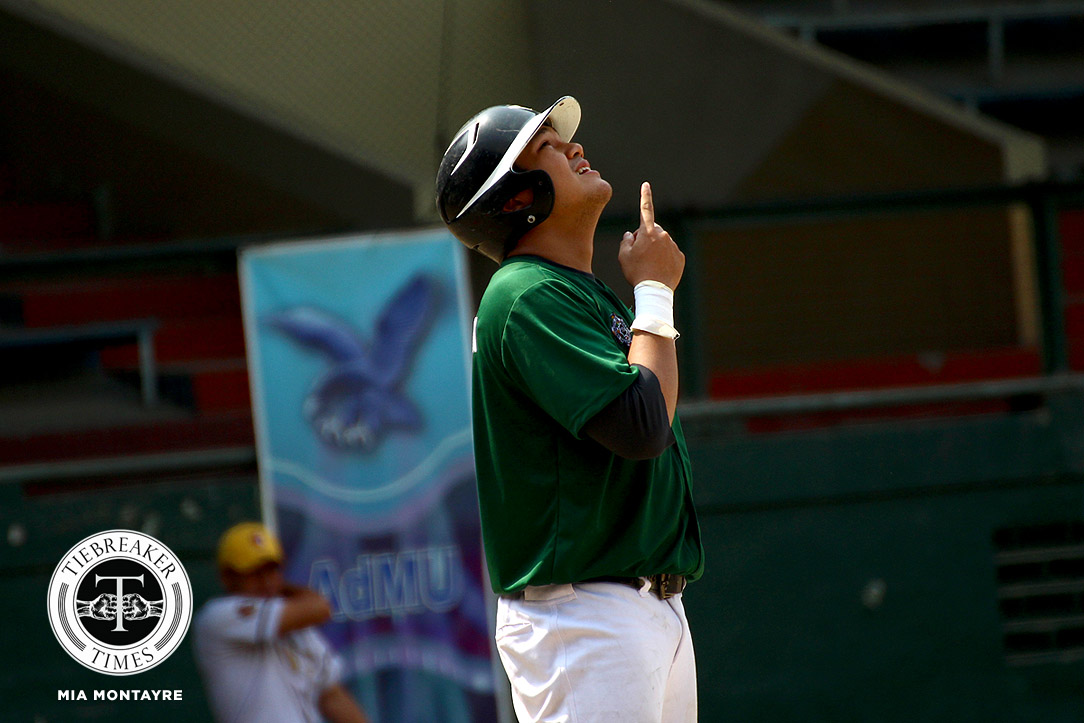 When it rains, it pours for the De La Salle University Green Batters, as even the bench delivered when called up.

La Salle completely decimated the entire pitching crew of the University of Santo Tomas Golden Sox and dominated after seven innings, 21-5, and forced a tie at the top of the standings with their sixth win of the season, Wednesday afternoon at the Rizal Memorial Baseball Stadium.

With the win, the Green Batters level the Ateneo De Manila University at 6-2 to lead the pack before the crucial stretch of the elimination round.

It was designated hitter Bill Evangelista who made his mark for the La Salle squad, after his two consecutive hits put the squad up 10-0 after four innings. His double in the second inning put runners in scoring positions, with him and Kiko Gesmundo giving catcher Anton Rosas to score Gesmundo in the ensuing at-bat get his squad to the 4-0 lead.

In the following inning, Evangelista’s second base hit, a single, again started it off for the Green and White before he also crossed the plate after Paolo Salud sent the designated hitter home along with scoring first baseman Tuwi Park to increase the lead to 6-0.

Salud also flexed his muscles on offense with three hits in five at-bats with two RBIs, and also scoring three runs of his own.

The Thomasians scored a run in the sixth inning and another two in the seventh, but it was too litte, too late.  The Green Batters had free reign at the top of the seventh inning to end the game at 21-5 with a huge seven-run binge, as the bench mob showed their hunger by hitting six of their seven points.

Arvin Herrera was dominant on the mound for La Salle after limiting the Tigers to just five hits and getting only seven people left on base. On the other hand, Jackson Acuna, Ian Llave, Ron Dela Cruz, Vince Mangapis, and Paulo Ortega suffered at least a hit each, for a total of 20 hits from the Green Batters.

That tussle for the top positions for 6-2 Green Batters and Ateneo will happen on Sunday, March 17 at 10 a.m. The Golden Sox and Adamson University, both at 4-4, will have their own battle later that day at 1 p.m.