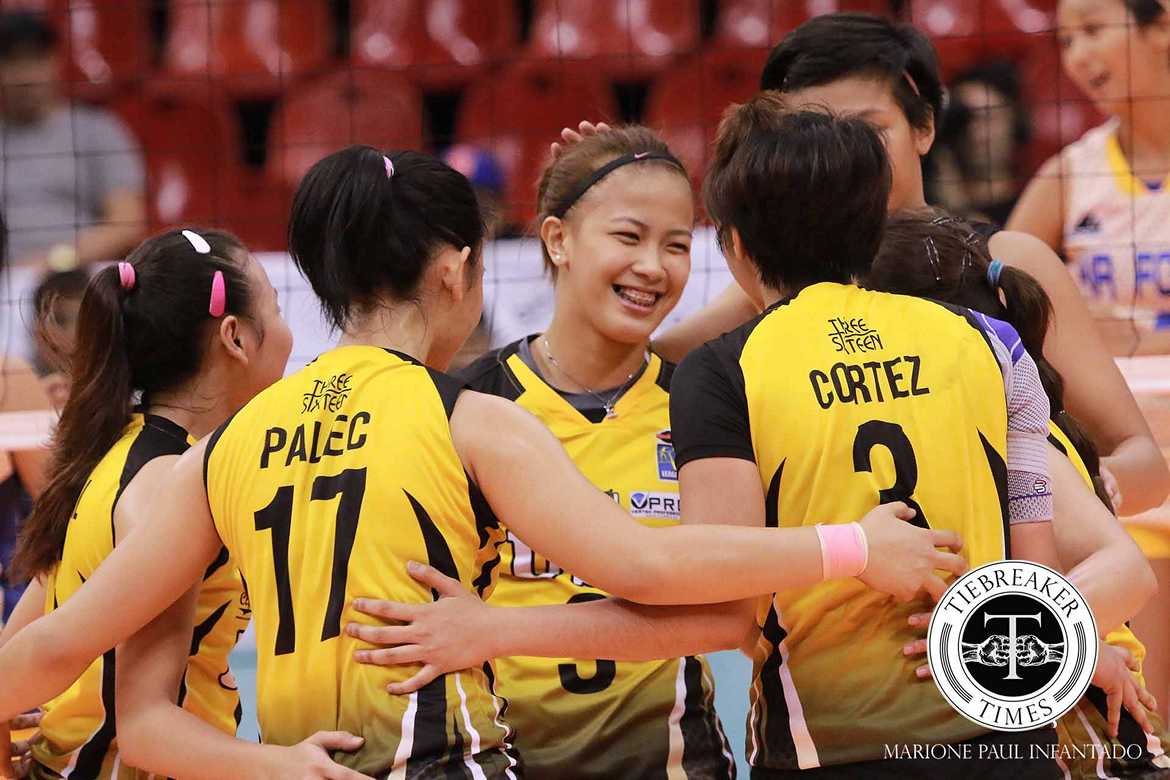 Fielding in just ten players did not bring much problem for the University of Santo Tomas Tigresses as they posted a surprising victory against Philippine Air Force Jet Spikers in four sets, 25-15, 25-20, 25-13, and 25-21 in the 13th Shakey’s V-League Reinforced Conference encounter Saturday night at the Philsports Arena in Pasig City.

Cherry Rondina, Caitlyn Viray, and Christine Francisco were not able to suit up in tonight’s match due to their participation in the UAAP Season 78 Beach Volleyball tourney. Team captain Pam Lastimosa, on the other hand, passed up due to academic commitments.

Four Tigresses blossomed in the four-set victory. Carla Sandoval and Ennajie Laure each scored 19 points, coming off 18 and 12 attacks, respectively. Marivic Meneses made 15, while Chlodia Cortez added 12 markers. Alexine Cabanos had a good outing by dishing out 58 excellent sets.

The Tigresses went a bit slow in the early parts of the opening set, but were able to connect on the offensive end to take the driver’s seat with a four-point cushion, 17-13, midway. UST then feasted on Air Force’ errors, wrapping up the set with an 8-2 run to own a 1-0 set advantage, 25-15.

From a dismal output in the previous set, the Jet Spikers heated up in the next frame. With the set at 15-all, Air Force relied on their quick hits to get nearer to set point, 24-18. UST scored twice to halt PAF’s run, 24-20, but an open hit from the Jet Spikers sealed the set in their favor, 25-20, to get even at one set each.

Air Force had another poor showing come the third canto, lagging behind in the majority of the set. The Tigresses took advantage of PAF’s slow pace and rallied to post a wide 16-8 lead midway. The Jet Spikers tried to come back, but UST’s offense was too much as they coasted to a 25-13 set win for a 2-1 lead.

Both teams played tight in the fourth and final set, with UST playing catch-up early. Down 16-11, the Tigresses, through running attacks, came back and snatched the lead, 17-16. Air Force kept it close, but an 8-4 scoring run sparked by Meneses got the job done for UST as they took the set, 25-21, and the match, 3-1.