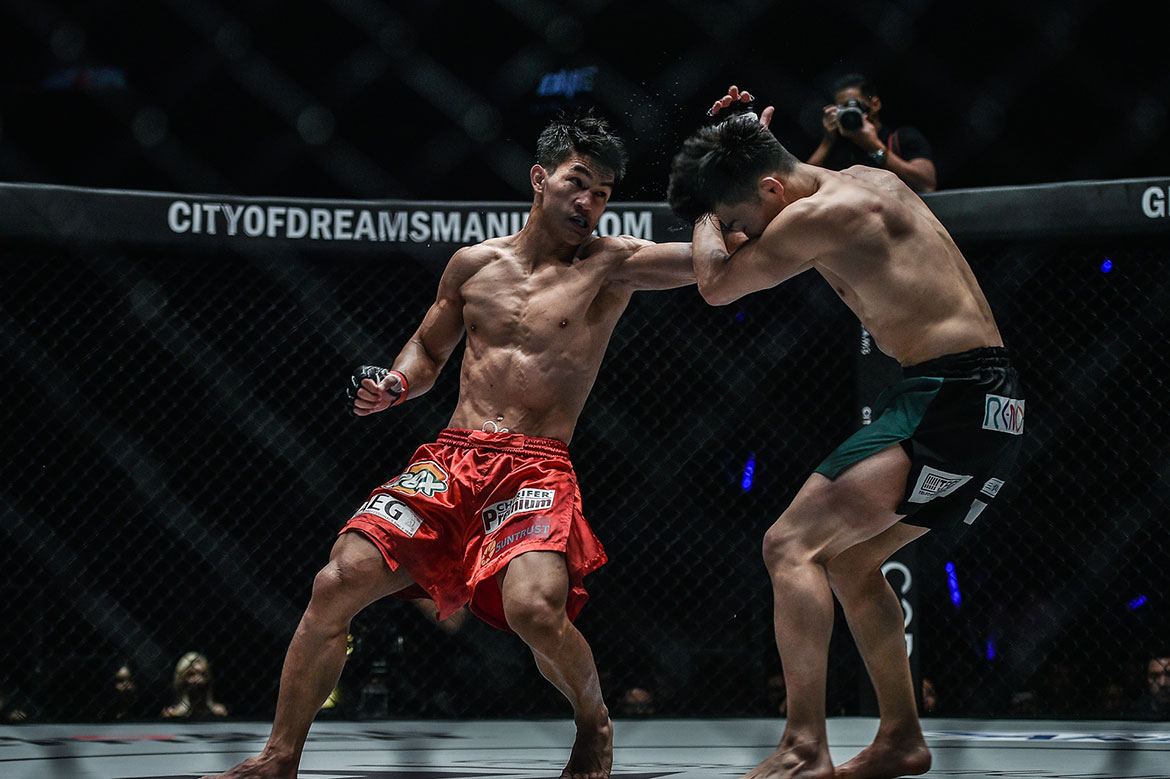 In a flyweight match-up with high stakes, Danny Kingad showed experience beyond his youth.

Figuring in one of the toughest bouts in his young career, the 23-year-old Team Lakay fighter – dubbed the ‘King’ – eked out a decision win over experienced Japanese grappler Tatsumitsu Wada, Friday evening at ONE: Hero’s Ascent at the SM Mall of Asia Arena.

Besides picking up his 12th win in 13 matches, Kingad will now advance to the ONE Flyweight World Grand Prix. The eight-man tourney is headlined by former UFC World Flyweight Champion and top pound-for-pound fighter Demetrious Johnson.

Entering the final stanza, Kingad and Wada were virtually tied in the scorecards.

Knowing this, the young gun out of Team Lakay threw crisp combinations to stifle the former DEEP champion.

Wada, who fell to 20-10, tried to go for a shoot to stop Kingad, but the Filipino cornered him.

When the match went to the mat, Kingad remained active to sway the judges to book this match in his favor.

In a battle between two debuting middleweights, Dutch fighter Reiner De Ridder extended his winning streak to 10 after a dominant submission win over Chinese upstart Fan Fong (11-1). The 28-year-old European MMA champion easily took down Fong with ease before locking a D’Arce choke for the submission win.

Rodtang “The Iron Man” Jitmuangnon of Thailand remained impressive in his ONE Super Series campaign, running through newcomer Fahdi Khaled of Tunisia to win via unanimous decision. The multiple-time Muay Thai World Champion gave the Filipino fans a show as he pushed the action with an unending flurry of strikes that kept the Tunisian newcomer at bay. Khaled had no answer for Rodtang as the Thai star cruised to a clear decision win.

Japanese striker Hiroki Akimoto overcame a knockdown in the first round to defeat Australian Josh “Timebomb” Tonna via unanimous decision in his ONE Super Series debut. The WFKO Karate Champion put on a striking clinic, picking Tonna apart with an array of thunderous kicks and powerful punches. A pair of knockdowns in the final round secured the win for Akimoto, who was dominant in his first ONE Championship appearance.

Thailand’s Bangpleenoi Petchyindee Academy was impressive in his ONE Super Series debut as he overwhelmed Brown Pinas of the Netherlands en route to a unanimous decision victory. The two-division WMC Muay Thai World Champion controlled the pace of the match as he punished Pinas with a relentless barrage of punches and kicks. Bangpleenoi scored a knockdown midway through the third round to seal the deal and earn his first win on the ONE Championship stage.

Algeria’s Elias Mahmoudi outstruck Japan’s Yukinori Ogasawara over the course of three rounds. Mahmoudi was on point in the opening frame, unloading a storm of thunderous kicks and pinpoint-accurate elbows on his opponent. Mahmoudi proved to be the faster and stronger man and was constantly a step ahead of his opponent in the succeeding rounds. In the end, all three judges scored the bout in favor of Mahmoudi.

Tang Kai of China left a lasting impression in his promotional debut, pulling off a statement victory over South Korea’s Sung Jong Lee. Living up to his reputation as a knockout artist, Tang got the job done in the second round, shutting the lights off on Lee with a thunderous high kick.

Japan’s Hiroaki Suzuki claimed his second-straight victory on the ONE Super Series stage, stopping Mohammed “Jordan Boy” Bin Mahmoud in the final seconds of the third round. Suzuki utilized his speed and power to connect on a handful of thudding strikes on Mahmoud, who responded with solid hooks and knees to the body. In the closing moments of the final frame, Suzuki stunned Mahmoud with a combination, earning him a technical knockout victory.

Setting the tone for an action-packed evening was a strawweight encounter between India’s Himanshu Kaushik and Indonesia’s Egi Rozten. Driven to claim his first victory in ONE Championship, Kaushik made quick work of Rozten, knocking out the Indonesian warrior with a barrage of punches in the first round.