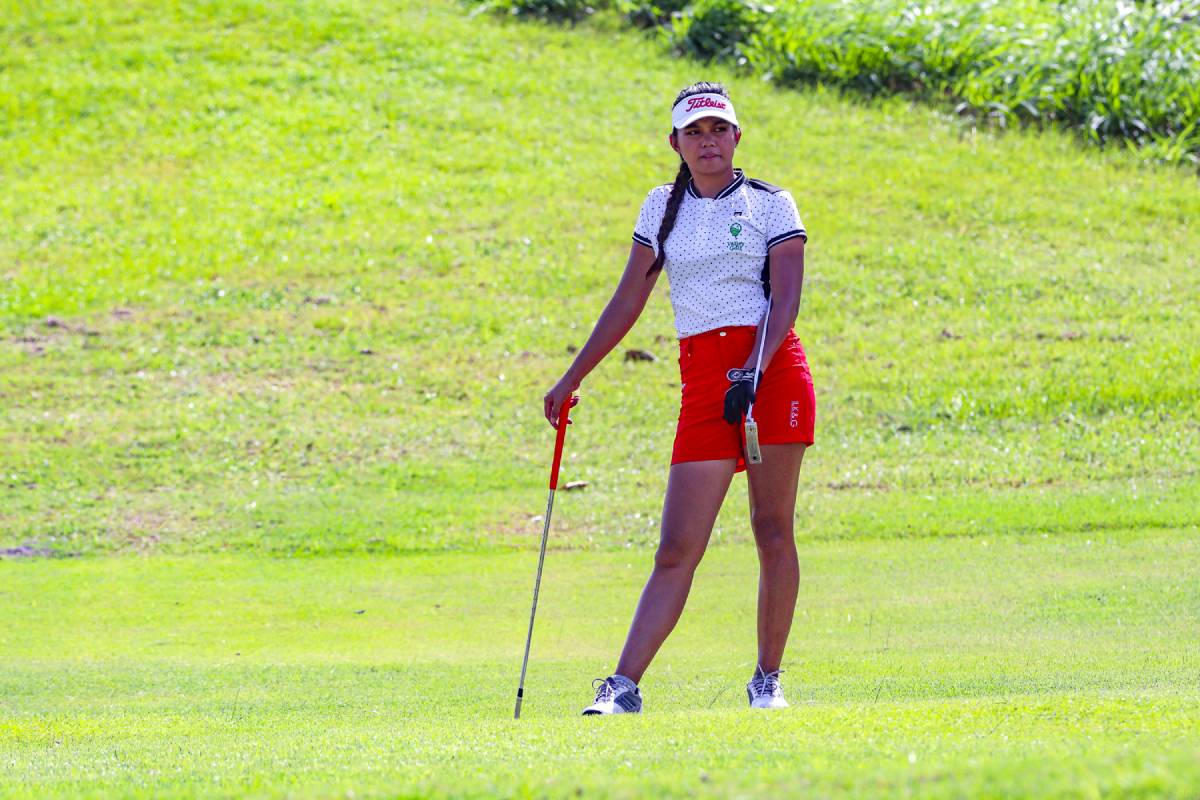 SILANG, Cavite — Daniella Uy moved into the threshold of a dream Ladies Philippine Golf Tour finish, battling back strong from a ghastly quadruple bogey on No. 8 with a string of birdies then held sway to seize a three-stroke lead over Chihiro Ikeda in a wild second round of the ICTSI Riviera Ladies Championship here, Thursday.

The Langer course continued to be a nightmare of sorts for the ladies of the Philippine Golf Tour but Uy bounced back from a 7 on the par-3 No. 8 on a couple of errant tee-shots to the hazard with three straight birdies linking both nines then ran off a gutsy streak of pars for a 38-34 to zero in on an LPGT breakthrough.

Uy had never held the lead heading to the final round of an LPGT championship but the former Junior World champion is all fired up to stay ahead till the last shot and putt are made.

“Anything can happen here at Langer,” said Uy, whose 146 total put her closer to surpassing her career-best tied for second effort at Highlands ruled by Sunshine Baraquiel three weeks ago.

“So I need to be patient and focused,” added Uy, who proved the toughest in a day of survival as the rest came in ruffled by the wind that blew from all over and imploded on the unreceptive greens and tough pin placements.

Harmie Constantino, who stormed ahead by three after 18 holes with a 70 Wednesday, stumbled right on the first hole with a double bogey and spent the rest of the grueling day trying to recover – to no avail as she reeled with seven bogeys and a double bogey against a lone bogey. She ended up with an 81 and fell to joint third with last week’s Couples leg winner Chanelle Avaricio, who birdied the last hole to salvage a 75, at 151, five shots off Uy.

Ikeda, looking for a successful campaign after finishing joint runner-up at Highlands and Couples the last three weeks, birdied the first hole that however proved to be the lone bright spot in her scorecard marred by a double-bogey on the next and four bogeys. She parred the last seven holes to finish with a 76 and a 149.

Marvi Monsalve turned in a second 77 for a 154 at fifth, amateur Arnie Taguines hardly improved from a 78 with a 77, her 155 likewise moving her 18 holes away from nailing her second low amateur trophy after claiming it at Eagle Ridge Norman last July.

Taguines stayed six strokes ahead of Mafy Singson, the low amateur the last three tournaments, who recovered from a woeful 85 with a 76 for a 161.

Sarah Ababa, a former LPGT leg winner, also skied to an 81 for a 158 for seventh, Gretchen Villacencio assembled a 160 after her own version of a 10-over card, while Baraquiel bowed out with an atrocious 89 marred by two triple bogeys and three double bogeys for a 167.