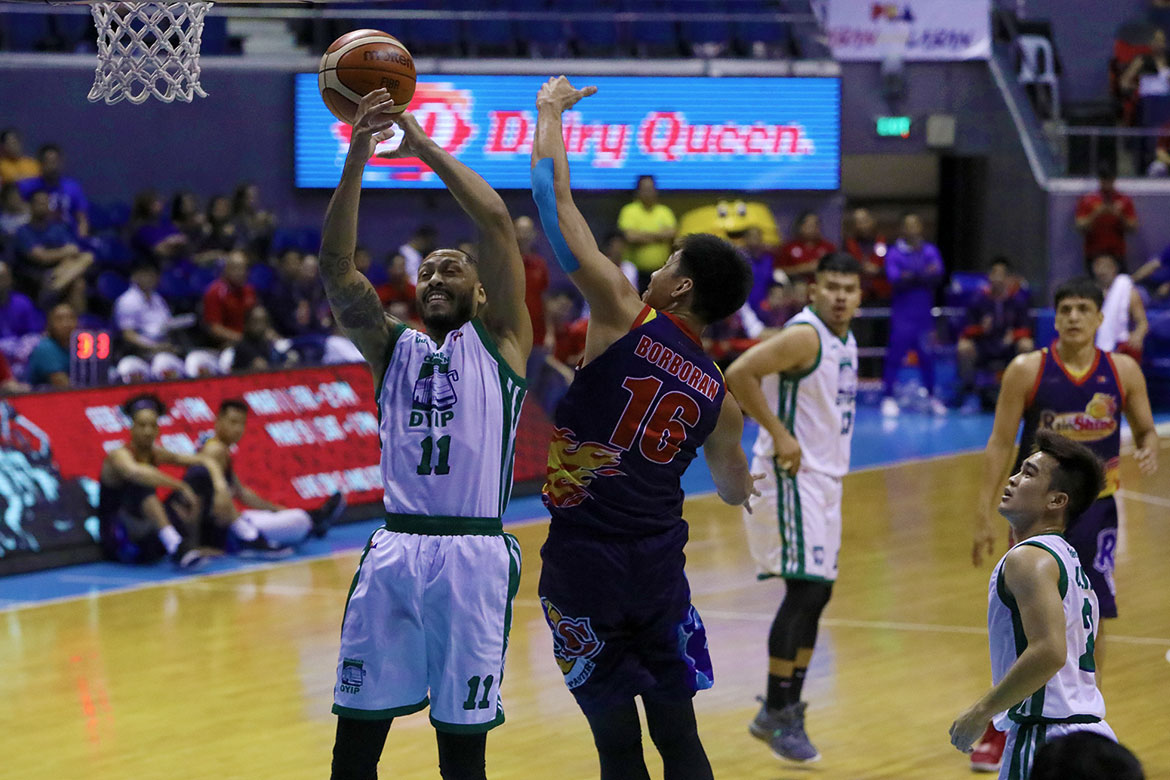 Just like the past conferences, the Columbian Dyip have continued their mastery of the Rain or Shine Elasto Painters for four conferences now after escaping with an 85-82 win in the 2019 PBA Philippine Cup, Wednesday evening at SMART Araneta Coliseum.

The Dyip have yet to lose to the Elasto Painters since the 2017 Governors’ Cup, which had been their ninth straight loss to the said franchise before this streak.

Rashawn McCarthy produced 22 points, five rebounds, and two assists to set the pace for Columbian, who redeemed themselves from a sour 100-106 loss to the lowly Blackwater Elite last March 1 and have now improved to 4-5.

“After losing to Blackwater, we needed to bounce back. Sabi ko sa kanila, after losing, that’s it. We need our last three games … We’re happy we have four wins now. We can now look at the quarters,” said Dyip head coach John Cardel.

Columbian faced a major scare late in the match. Rain or Shine fought back from eight points down and knocked within a solitary point, 82-83, after Gabe Norwood swished a corner three-pointer with 2:02 remaining.

But the Elasto Painters failed to buy needed baskets after that. They tried to resort to the fouling game, but the referees did not blow their whistles up until the 2.3-second mark that sent Reden Celda to the charity stripe.

Celda then obliged and coolly sank his freebies to stretch their lead to three.

Rain or Shine still tried their best to maximize the 2.3 ticks and gave it to James Yap for the game-tying triple. Unfortunately, Columbian immediately read the scheme and trapped the two-time league MVP to disrupt his shot.

Yap missed badly, sealing the win for the Dyip.

Jackson Corpuz came off the bench and provided the much-needed spark as he contributed 12 points and eight rebounds in the win. Rookie CJ Perez supplied a double-double of 11 points and 11 rebounds against one error.

Fellow Dyip rookie JP Calvo had an all-around outing as he made eight points, eight assists, and five boards.

Mark Borboran had 21 points to lead the Elasto Painters, who have now lost back-to-back games and are at  7-3. Yap and Javee Mocon had 12 points apiece, with the rookie out of San Beda adding nine rebounds and a steal.

Columbian will next face Magnolia Hotshots next Wednesday, March 13, still at the SMART Araneta Coliseum. Meanwhile, Rain or Shine will look to bounce back versus Meralco Bolts on March 15, Friday, at the Cuneta Astrodome.