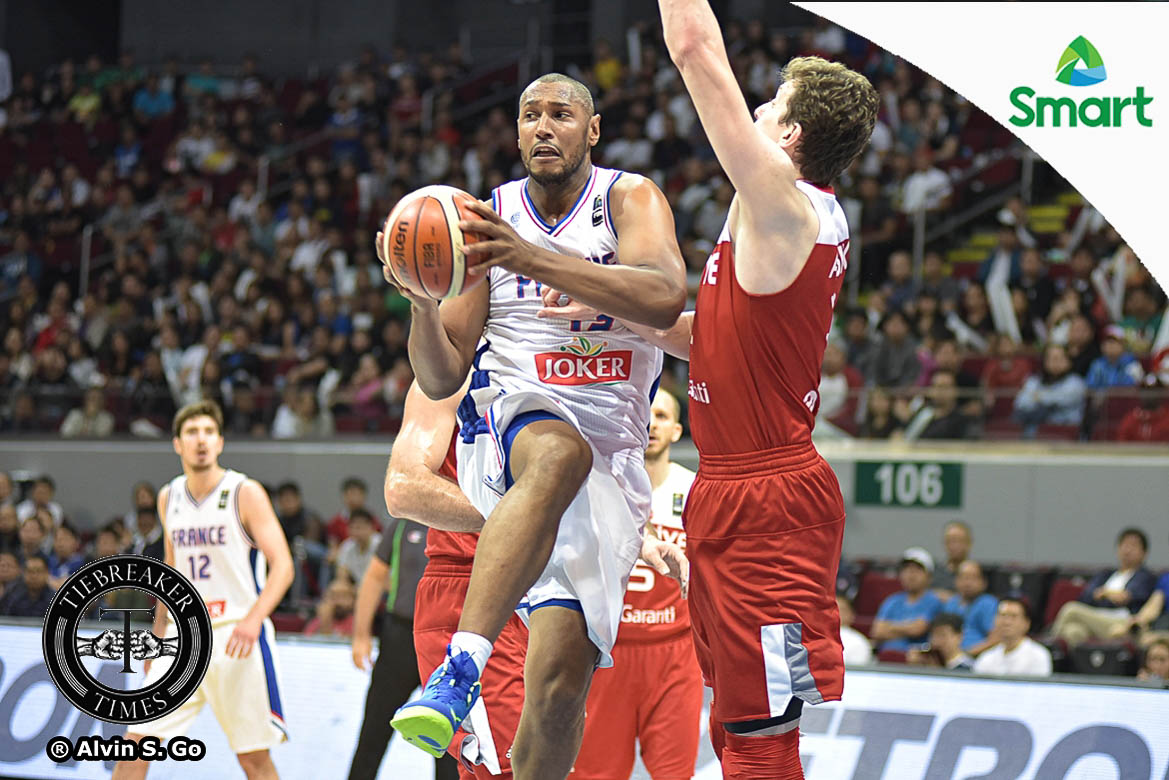 Although the French national team entered the final of the 2016 FIBA Olympic Qualifying Tournament in Manila, Philippines, after defeating Turkey, 75-63, head coach Vincent Collet and skipper Boris Diaw were still unsatisfied with another poor start for the team.

France beat Turkey on Saturday night in the semi-finals but again had to overcome a double-digit deficit. Turkey opened the game on a 13-3 run with Omer Asik imposing himself underneath, scoring six points in that opening stretch.

“Once again, we didn’t start the game the right way. Credit to the Turkish team. They played good together,” Diaw said.

“They gave us some troubles at the beginning of the game. We are still not satisfied about what we did and the way we started. That’s the third time now in this tournament that we haven’t started the game the right way,” he added. “That’s something we need to do better in the future.”

“We started the game bad,” said Collet, whose bench stepped up yet again for France.

“Our bench scored 42 points. That is a big difference.”

“We corrected it quite quickly. We controlled the offense much better. We committed mistakes but not many. On offense we had good moments.”

France’s reserves outscored Turkey’s bench, 42-18. Thomas Heurtel had a team-high 17 points on 7-for-11 shooting in less than 21 minutes, while Antoine Diot added 10 points. Asik had 12, while Dev Adam led the Turks 19 points on 8-for-11 shooting.

“The guards were aggressive. Thomas Heurtel’s second half, Nando (De Colo) before, we had a very good shooting percentage from two points,” Collet said.

De Colo helped France overcome the bad start, pouring 10 of 13 points in the first half as the Les Bleus took a 37-30 lead to the locker room.

“Thomas was hot tonight. We know he is that kind of player. He can get free, and when he has moments, he is difficult to stop,” Collet said of the 27-year-old Heurtel.

“The team worked hard for him to get the ball (in the game) and couple of possessions in a row, he made good decisions which allowed us to make the break.”

Diaw also praised France’s substitutes, who took charge for France in the fourth period and gave the starters ample rest.

“We are happy we came back in this game. Everybody was a part of it. All the guys did their jobs. Young guys came in and they really helped us, gave us a big lift to help us win this game,” Diaw said.

“I am happy to see that. It was really a lot of players helping us.”

France will battle Canada in the final of the tournament, with a ticket to Rio at stake.

Although France are the more experienced team, Diaw said there will be many other factors that can decide the outcome of the final.

“It’s really who’s going to want it more and more focused during the game.”

Collet, meanwhile, wants to try a slower pace against Canada, who are known for their transition game.

“It is a completely different match-up,” he said. “All of them, they are very young, very active.”

“Our goal is to try and slow them down and make them play halfcourt. When you let them run, it is very difficult to stop.”