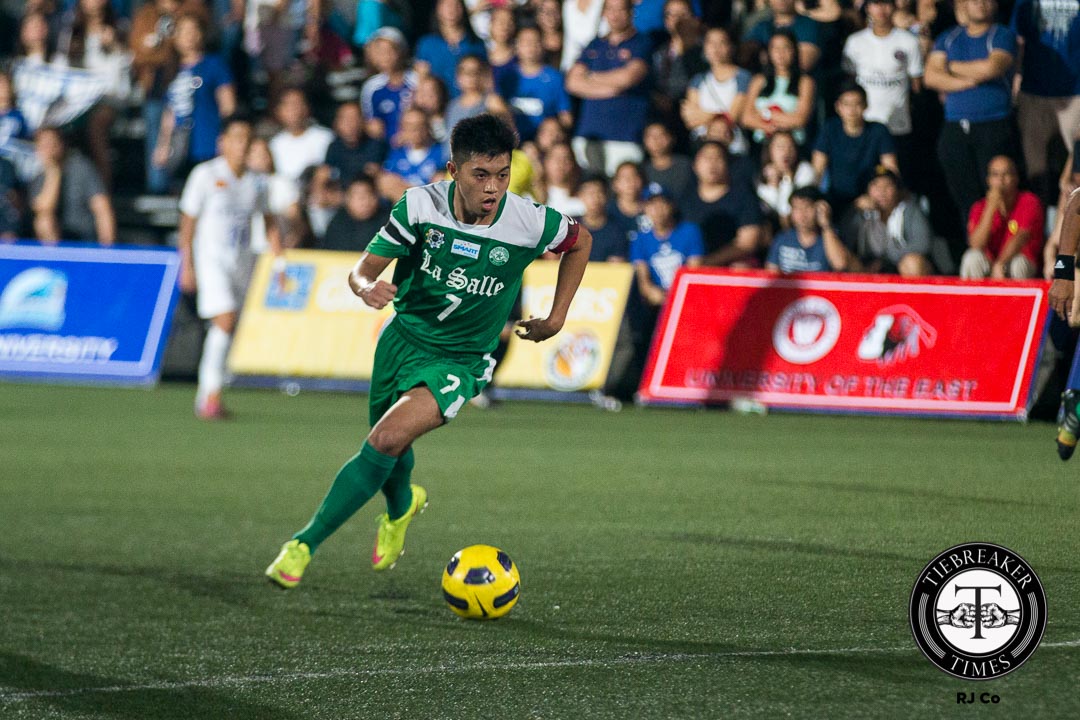 For DLSU Green Archers’ co-captains Gelo Diamante and Nace Gonzales, the team has to address the problems fast in order to guarantee themselves a place in the final four at the very least.

The Green Archers fell to their rivals last Thursday, 1-0, through a goal scored by Javier Gayoso. It left a bad taste to the men from Taft as it was the first time they lost to Ateneo since Season 75. “Everything went wrong in terms of how we approached the game, our tactics, our finishing, the way we reacted to the goal. I think we should have done just better and then kept our heads up instead of looking down whole game,” Gonzales observed. The form of Hans Smit’s boys now is a far cry from how the Lasallians have began this season.

Not so long ago, DLSU was one of the two teams that made a blazing start to the season, only dropping four points in an unbeaten first round spell. They appeared to be favorites in becoming the first team to book a place in the semifinals, but things headed to a different direction in the second round. In the five games they played, the Green Archers only won twice–both against teams who now have no chance of making the Final Four. DLSU might even consider themselves lucky in beating NU, who led 2-1 before suffering a stoppage time meltdown.

The losses may not have been heavy, but those did come against FEU, UP, and Ateneo–the current top three in the league. “Everyone changes. They adjusted and we didn’t adjust to their adjustments and that’s our fault,” confessed Gonzales. La Salle actually defeated the same teams in the first round, so maybe their top opponents have figured them out already come the succeeding meeting.

READ  Kiwi in the Middle: Ahomiro glad to be back at original position

This may come as a blessing in disguise for the Lasallians, who had a more comfortable campaign last season. Not losing their first 15 games of the season, DLSU crashed at extra time against FEU in the last year’s final. With adversity coming earlier, the Green Archers have time to respond and improve further. “Like I told the boys, you never win every game but you need to be consistent as much as possible and for every game we do not win, we have to learn from it so we’ll come better the next game,” Diamante shared.

For them to play better in their upcoming matches, Gonzales believes the team should embrace change. “We just have to figure out every team and make sure this doesn’t happen again. We can’t continue how we’re doing now. We have to change,” the fifth year midfielder said. One of the things they need to change is their approach in their game. Known to play excellent ground passing football, the Lasallians struggled to make possession count on a rugged pitch, as the team is used to play on a smoother artificial surface. Diamante cites it as a factor that went against them in the game, but doesn’t make it an excuse in their loss. Instead, he hopes the team will take away something from the result.

“The field was a big factor. We lost a lot of balls due to the field. I don’t think we didn’t do enough effort, but I think Ateneo had one chance. They exploited it, they made the most out of it. I really think the boys played well, but we’re going to work on what’s wrong with our game to get back in our next game,” he furthered.

There are still two more games for La Salle to redeem themselves. Still in the top four, the Green Archers are in a good position as they won’t have to rely on other results. The loss, however, serves as a reminder that the Lasallians still have plenty to do to make sure they will play in the semifinals. “We need to come in our last two games really strong. We need to win both games. We know we can we just have to prepare for each game,” Diamante confidently responded.

As for Gonzales, they couldn’t afford to cry over spilled milk now. “The best way to urge them is to accept this loss. You can’t live by this loss,” he stated as they now look to bounce back tomorrow afternoon against Adamson. A win there would put La Salle in second place and close the gap between them and league leaders UP to just a point. Aside from the position in the table, a victory will definitely boost the Archers’ belief in going all the way.