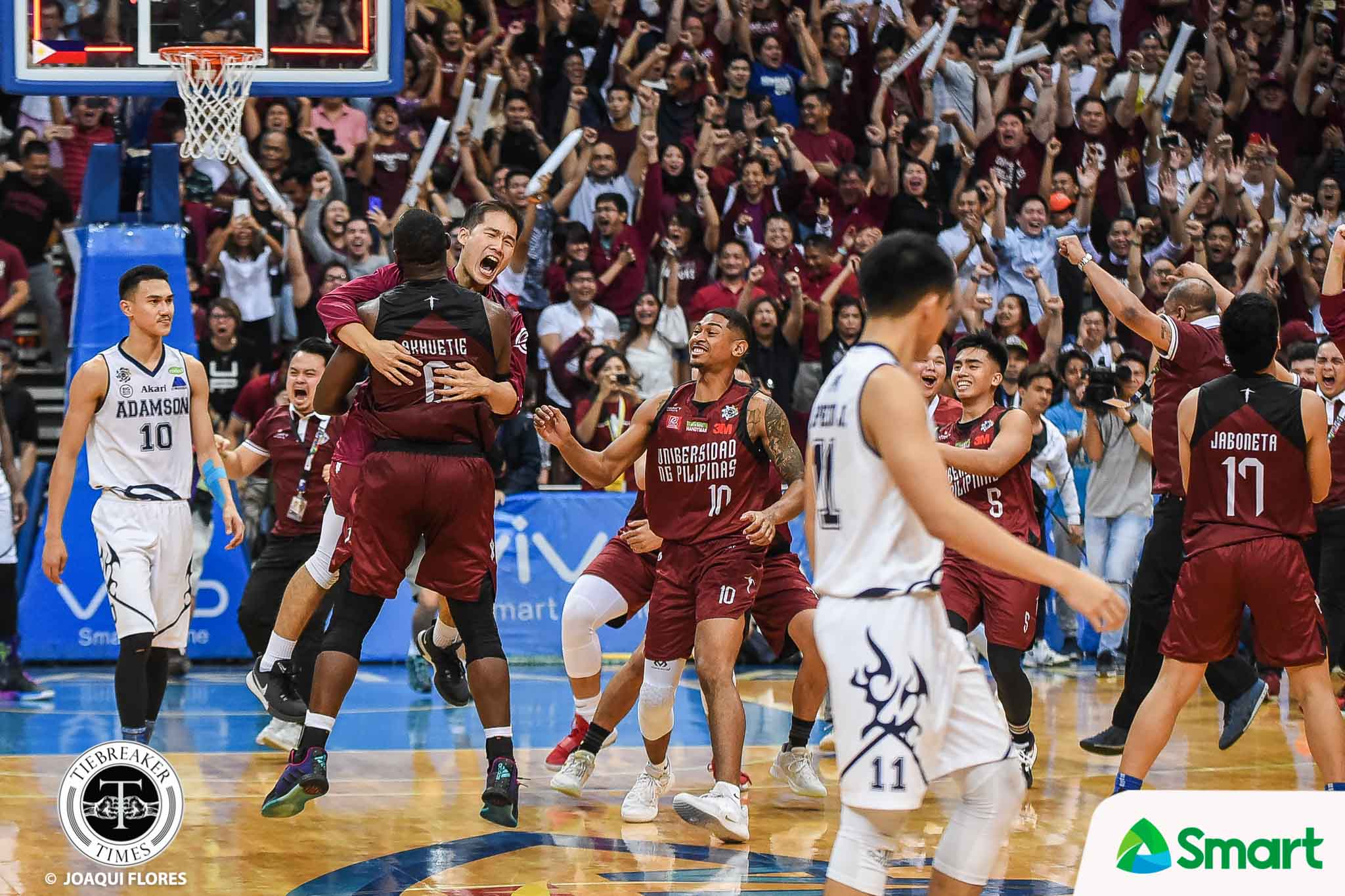 Just three seasons ago, these two squads were at the bottom league. Fast forward to 2018, the upstart programs will figure in a win-or-go-home game with a Finals berth at stake.

After suffering numerous heartbreaks from the Adamson University Soaring Falcons over their last three encounters, Bright Akhuetie and the University of the Philippines Fighting Maroons made sure to give them the same, taking a 73-71 win, Saturday evening at the SM Mall of Asia Arena in Pasay City.

“If the heads of our players will be our gauge, I can see that they refused to lose. In the end, it’s not about winning or losing, it’s how we play the up-and-down game,” said third-year Fighting Maroons head coach Bo Perasol.

Akhuetie – who is set to become the UAAP Season 81 Men’s Basketball Tournament Most Valuable Player – was limited to just six points on five attempts in the game, down 12.86 points from his regular season norms. Still, the 22-year-old Nigerian student-athlete delivered in the clutch.

With the game knotted at 71-all with 3.7 seconds left, Juan Gomez de Liano was able to locate Akhuetie underneath the rim. The transferee from Perpetual Help calmly sank a reverse lay-in with 2.6 ticks to spare.

“Winning against Adamson is not easy. We have a lot of things to adjust to when we get back. My guys just made the plays when it mattered. Juan made a great pass to Bright, [Paul] Desiderio made that big shot, Juan made two big free throws,” Perasol added.

Adamson had no timeouts left. Junjun Espelata’s Hail Mary heave was swatted away as the pro-UP crowd celebrated to the beat of their Pep Squad’s drums.

#ReadMore  There's nowhere to go but up for Fighting Maroons

And no one could deny them a moment that has been 21 years in the making. The last time UP won a Final Four game was back in 1997, when the Fighting Maroons stunned top-seeded FEU Tamaraws, 70-69, to force a Game 2 as well.

Safe to say, the UP crowd were on the edge of their seats for the final 10 minutes of the game. Especially as the Fighting Maroons’ 13-point lead was chopped inch by inch by the duo of Sean Manganti and Jerrick Ahanmisi.

“They are a very resilient team. I kept on telling them that whatever happens, we have to go through these types of games,” Perasol remarked about Adamson.

Manganti, who has developed a reputation as the Maroon-killer, scored on back-to-back buckets to give Adamson a four-point edge with 2:18 left.

But then with the game knotted at 69-all, Desiderio scored on a tough stepback jumper over Jerom Lastimosa with 5.5 ticks left. On the other end, Janjan Jaboneta tripped Manganti, leading two free throws to knot things up for the sixth and final time.

Desiderio and Gomez de Liano led UP with 19 points each, with the former grabbing eight rebounds and dishing out four dimes as well.

“While the game was going on, you can’t help but hear the crowd. At the back of mind, we need to give them a game that they can be proud of,” expressed Perasol.

The sudden-death game will take place on Wednesday, November 28.

#ReadMore  State U survives Mapua U for maiden win