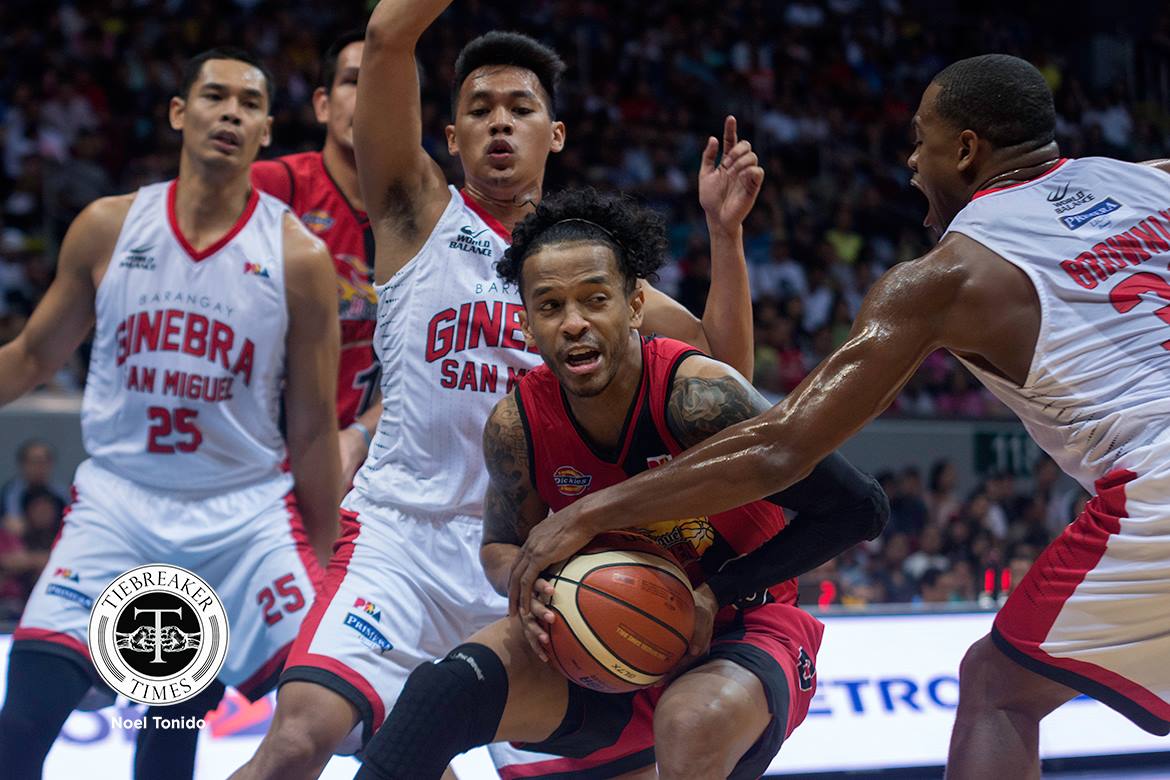 Chris Ross was the last guy to come out of the San Miguel Beermen’s locker room at the SM Mall of Asia Arena on Sunday night. The Filipino-American guard was clearly dejected, as his side had just lost to Justin Brownlee and the Barangay Ginebra.

“They beat us to all the 50-50 balls, our shots weren’t falling in,” lamented the six-foot-one point guard moments after the Beermen’s stinging 109-77 defeat, their second loss in three games.

“It was the breaks of the game.”

Ross’ point was valid. The breaks of the game decided the bout’s outcome, and it did not go their way. It was evident down the stretch, particularly the span in which San Miguel were about to complete a monumental comeback.

Once down by 17 early in the final frame, SMB managed to come close, 93-90, after an Alex Cabagnot wing triple with 2:47 to go. Justin Brownlee responded, but the gap was not that far, and San Miguel could still take over.

But the turning point came shortly after.

As the Beermen missed, Brownlee received a touchdown pass and raced down for a finish, aiming to widen their lead further. Ross stood in his way and tried his best to stop him, but he was whistled for a defensive foul.

That call had Ross fuming with rage.

He was all over the referee, arguing that it was an offensive foul instead by the 6-foot-7 forward. But moments after, the referee had heard enough, and decided to blow his whistle once more and slap Ross with a technical foul.

And that proved to be the final blow to SMB’s comeback hopes.

LA Tenorio sank the technical free throw, and Brownlee perfected his charities afterwards. The Barangay were then ahead by eight points, 98-90, with exactly two minutes left to play — a lead they held on to en route to the win.

“It was a one-possession game at the time, [and I] felt like we were getting the momentum. Instead of us getting the ball down one possession, they had the ball, [and then] they go up two possessions.

“Tough break of the game,” lamented the 32-year-old. “It was the call he made. It was a technical, [but] I don’t think I deserved it. He did what he wanted to do.”

Still, damage has been done. The loss has been recorded. But the four-time champion and two-time Finals MVP never loses faith with his teammates, as he believes that Sunday’s setback will only help them even more.

“You learn a lot of things in a loss,” said Ross.

“I know the character of the guys we have, and Charles [Rhodes] is a good character guy also. And I got complete faith in my team that we’ll take this loss and learn from it, and finish strong.”

Valdez looking at final elims games as confidence-booster for Creamline