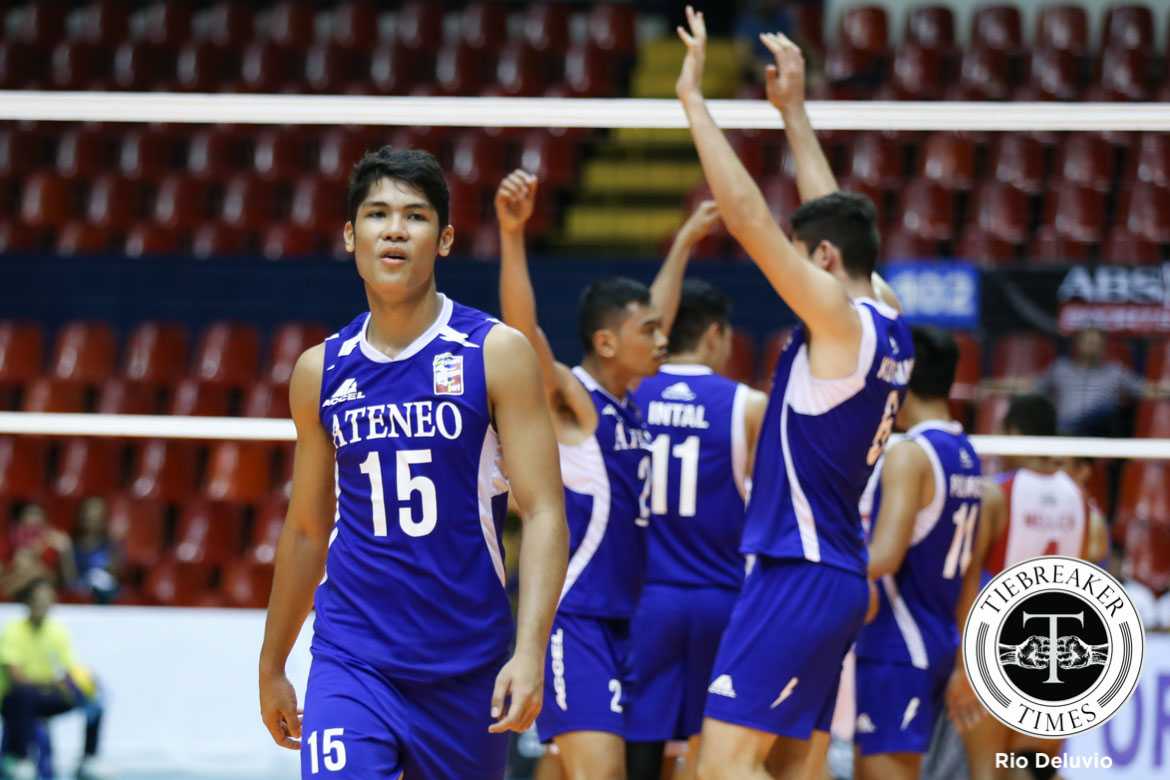 Looking dazed early in the match, the Ateneo de Manila University Blue Eagles gathered steam late and smashed the Emilio Aguinaldo College Generals, 25-23, 26-28, 25-20, 25-17, in Group A of the Spikers’ Turf Collegiate Conferece at the PhilSports Arena in Pasig.

Sporting a weaker lineup compared to their NCAA 91 roster, EAC kept within range of the defending UAAP champs for much of the first two sets. Ateneo saw a slim three-point lead, 16-13, trimmed quickly and had to rely on smashes from Marck Espejo to escape with the first set win.

EAC then broke away from a 19-all deadlock to take a 21-19 lead in the second frame. Ateneo rallied back, using quick plays and Espejo rockets to force a deuce. Espejo then traded hits with EAC open hitter Kerth Melliza, but late Ateneo attack errors gave EAC the advantage, with a block from Israel Encina to end the set.

Ateneo were further backed into a corner when EAC sprinted to a 13-9 lead in the third set. According to Ateneo head coach, Oliver Almadro, his team had been knocked out of focus by the Generals’ jeering and trash-talking.

“Sabi ko nga sa kanila (Blue Eagles) there’s a fine line between kindness and stupidity,” Almadro remarked. “If the opponents will give you trashtalk, you should give them trashtalk as well. I guess my players aren’t used to jeering and trashtalk.”

“I’m happy to see that my players can also respond to that type of match.”

After a timeout, the Blue Eagles found new energy and wiped the Generals off the court. Josh Villanueva’s serving and Ish Polvorosa’s smart setting laid the foundations for a 9-0 Ateneo run to grab the third set. The Blue Eagles then pounced on their foes in the fourth set, nabbing an insurmountable 19-10 lead and never looking back.

“Sabi ko nga sa mga players na they have to be ready because I’m trying to find their roles for the team so they just always have to be prepared to play even different positions,” Almadro said.