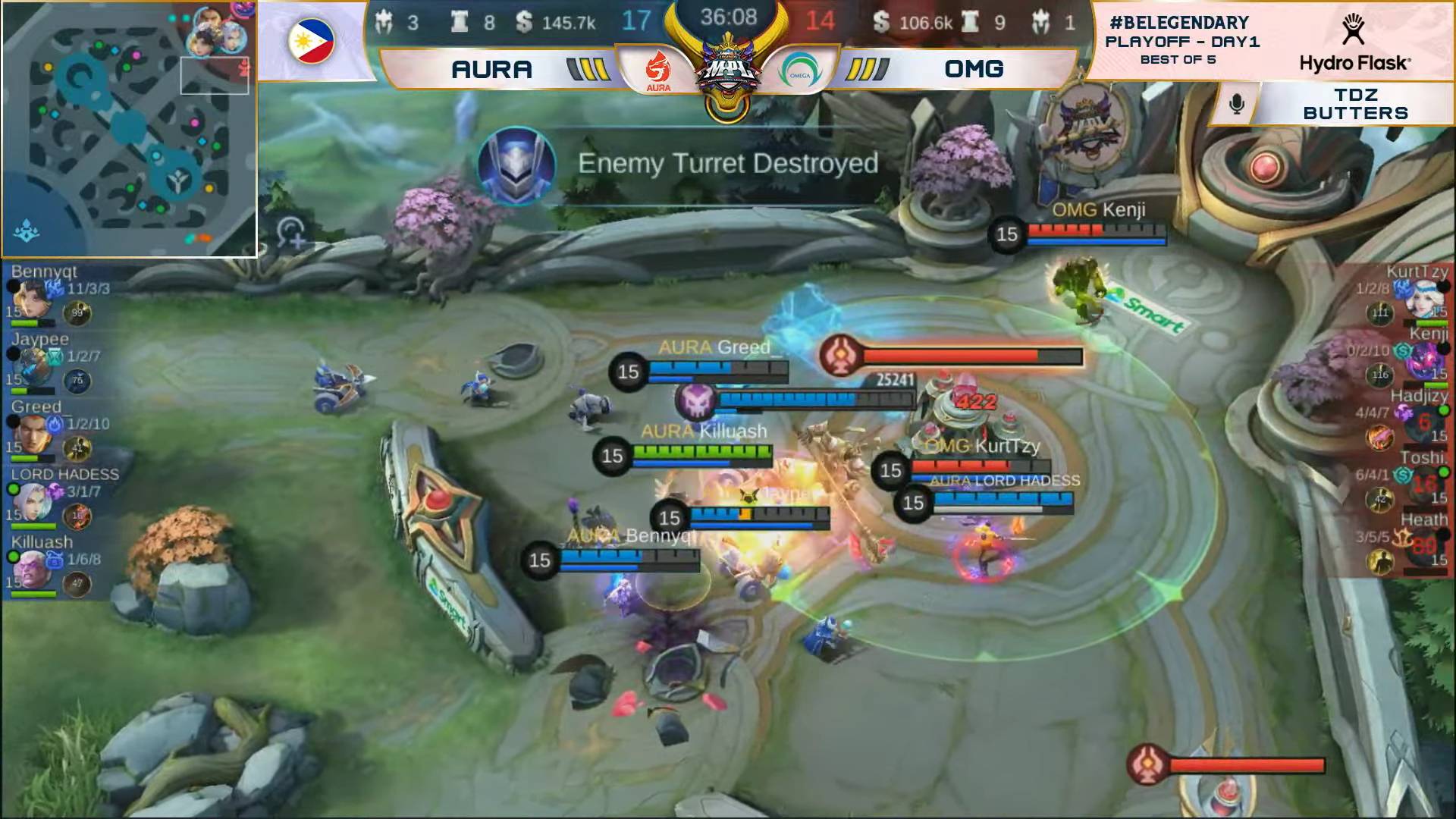 The former Execration core put up a game-high 11 kills and three assists against just three deaths to win the SMART MVP award in the match that lasted for 36 minutes and 12 seconds. 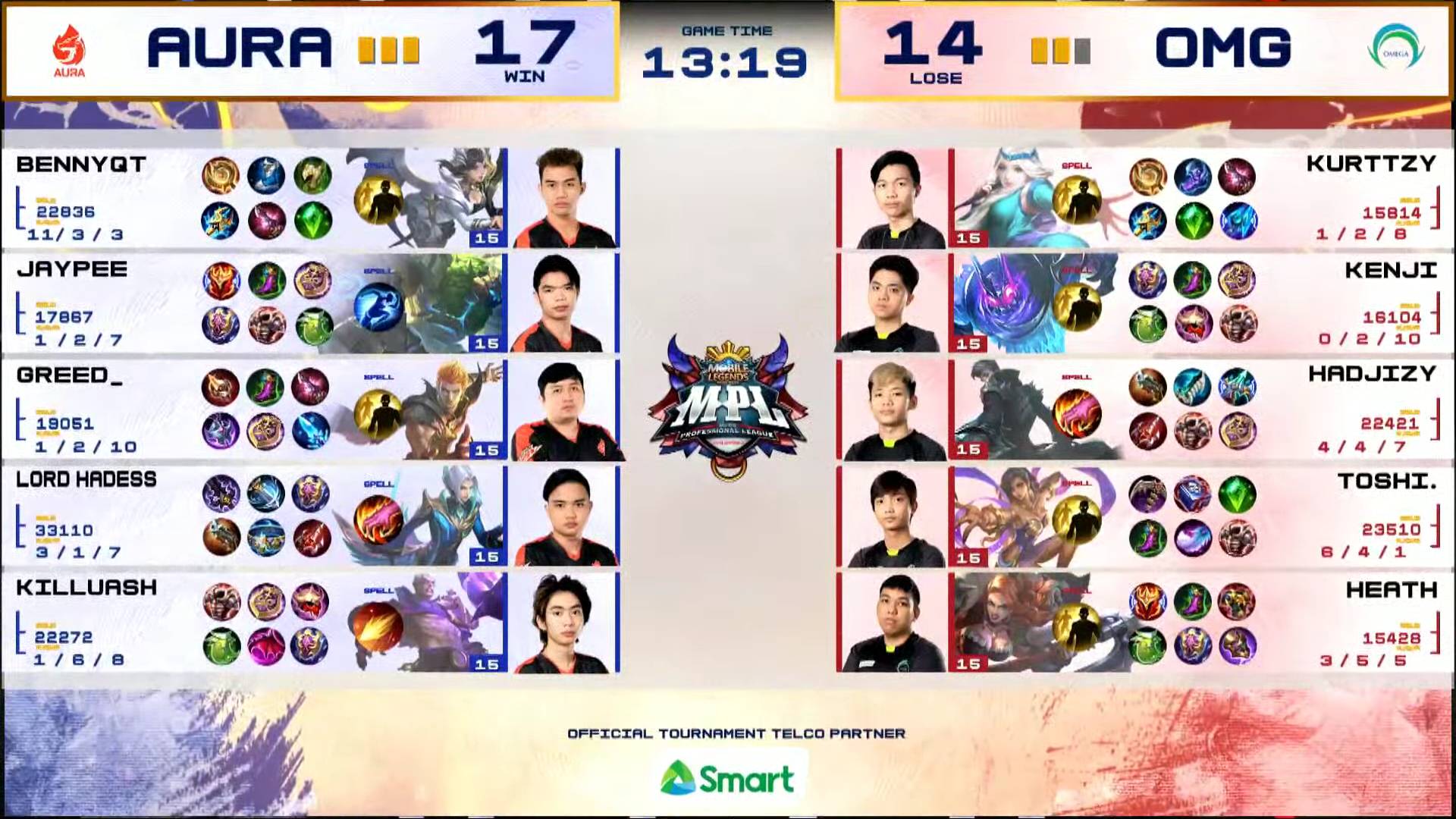 A pick off on EJ “Heath” Esperanza’s Hilda allowed Aura PH to take the Luminous Lord at the 35:05-minute mark.

Salic “Hadjizy” Imam (Granger) and Jankurt “KurtTzy” Matira (Kagura) tried to salvage the win for Omega with a last-ditch attempt to steal the Luminous Lord but Mark “LORD HADESS” Lazaro (Ling) was on point on his Retribution.

Allen “Greed_” Baloy (Valir) stole the first Lord of the game which bought enough time for Aura PH to come back in the match.

LORD HADESS had three kills and seven assists against a death while Greed_ added 10 assists laced with a kill and two deaths.

Adrian “Toshi” Bacallo led the fight for Omega with six kills, four deaths, and an assist.

Omega Esports emerged victorious over Aura PH in the longest game of the season all thanks to the clutch split pushes coming from KurtTzy’s support Benedetta.

The Season Six grand finalist secured the win after Hadjizy (Ling) and KurtTzy caught LORD HADESS’ Granger and Ashley “Killuash” Cruz’s Thamuz — who were seconds away from finishing the match.

KurtTzy nabbed the SMART MVP honors in the 18-16 victory which lasted for 46 minutes and 19 seconds with three kills, three deaths, and five assists. This was the longest game this season. 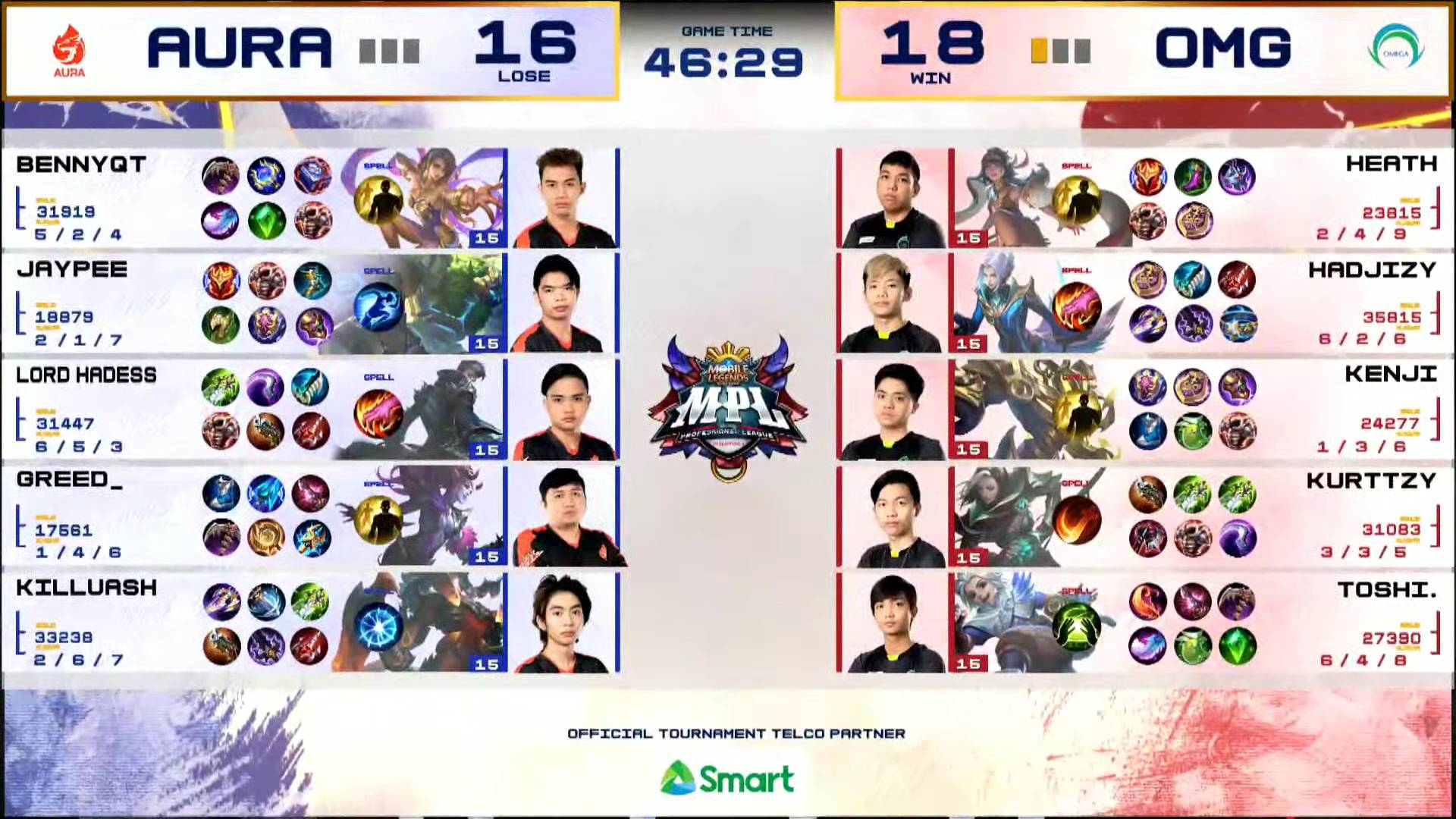 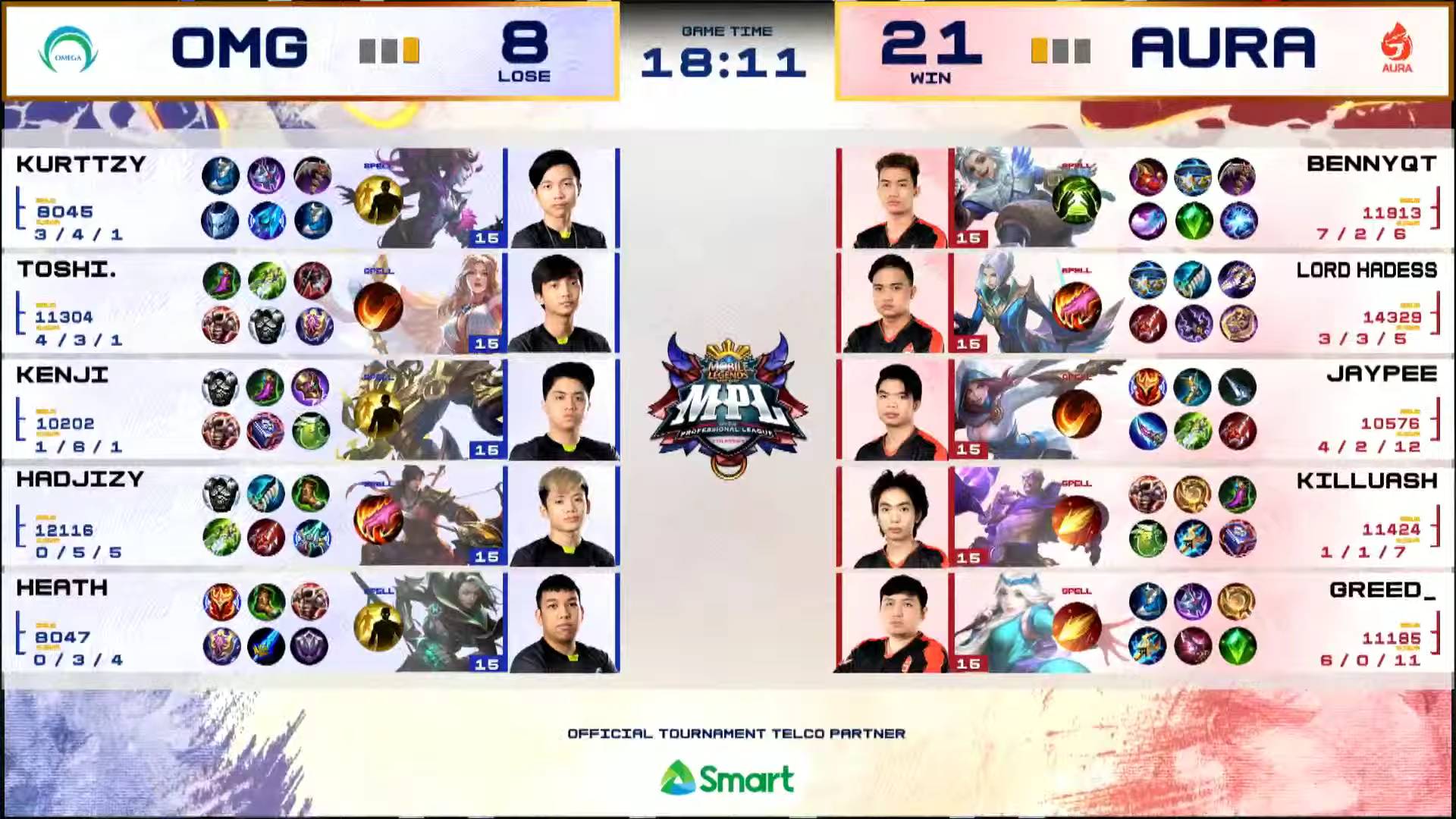 The two-time champions then leaned on LORD HADESS’ Claude in Game Three to notch the 12-12 victory in 17 minutes and 53 seconds. He was awarded the SMART MVP award with two kills and nine assists, pulling Aura PH a game away from advancing to the upper bracket finals. 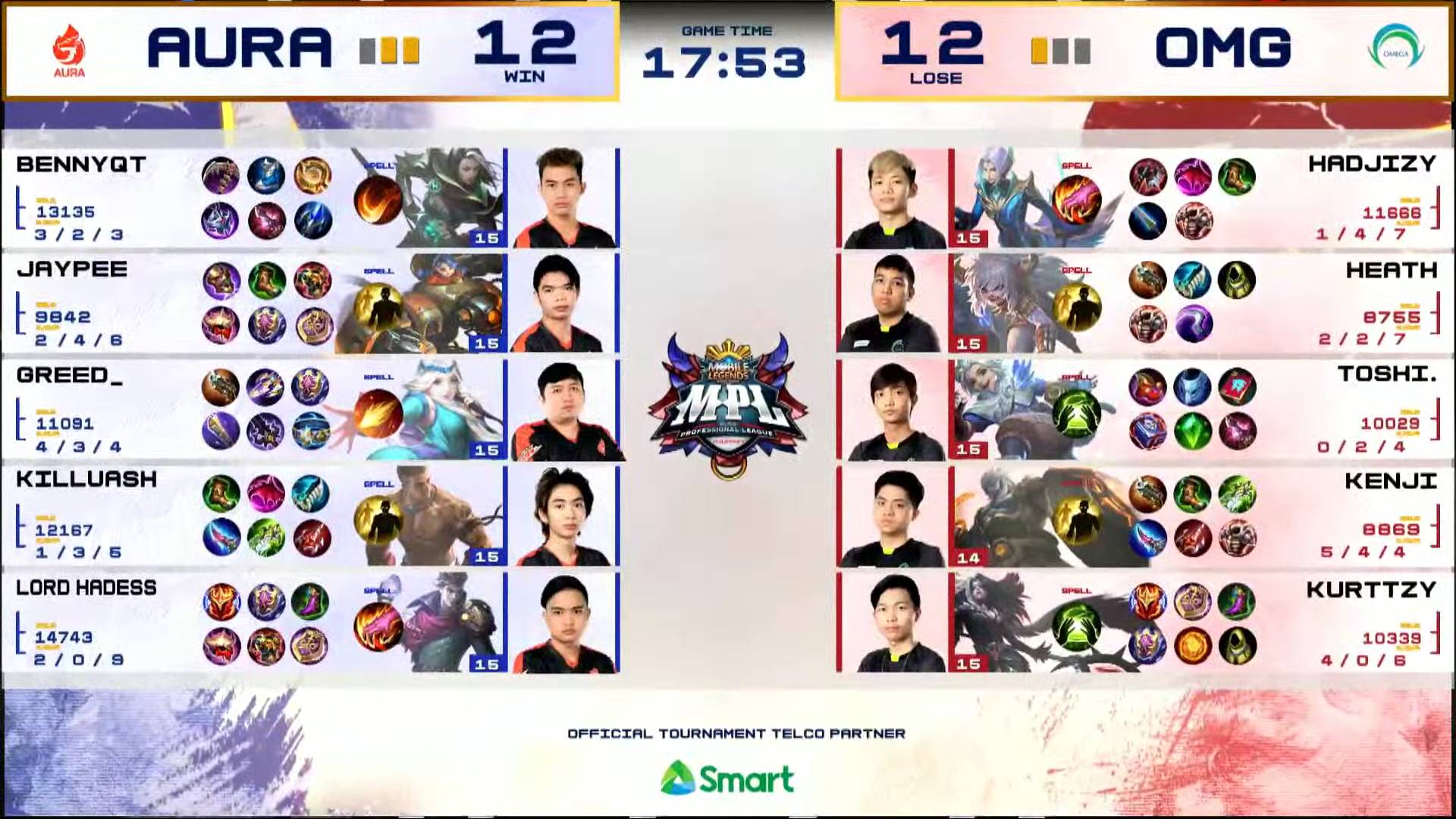 But a perfect Gloo performance from Kenneth “Kenji” Villa in Game Four threw the series to a winner-take-all Game Five. The Southeast Asian Games gold medalist had a 4-0-8 line en route to the SMART MVP award in the 17-3 win. 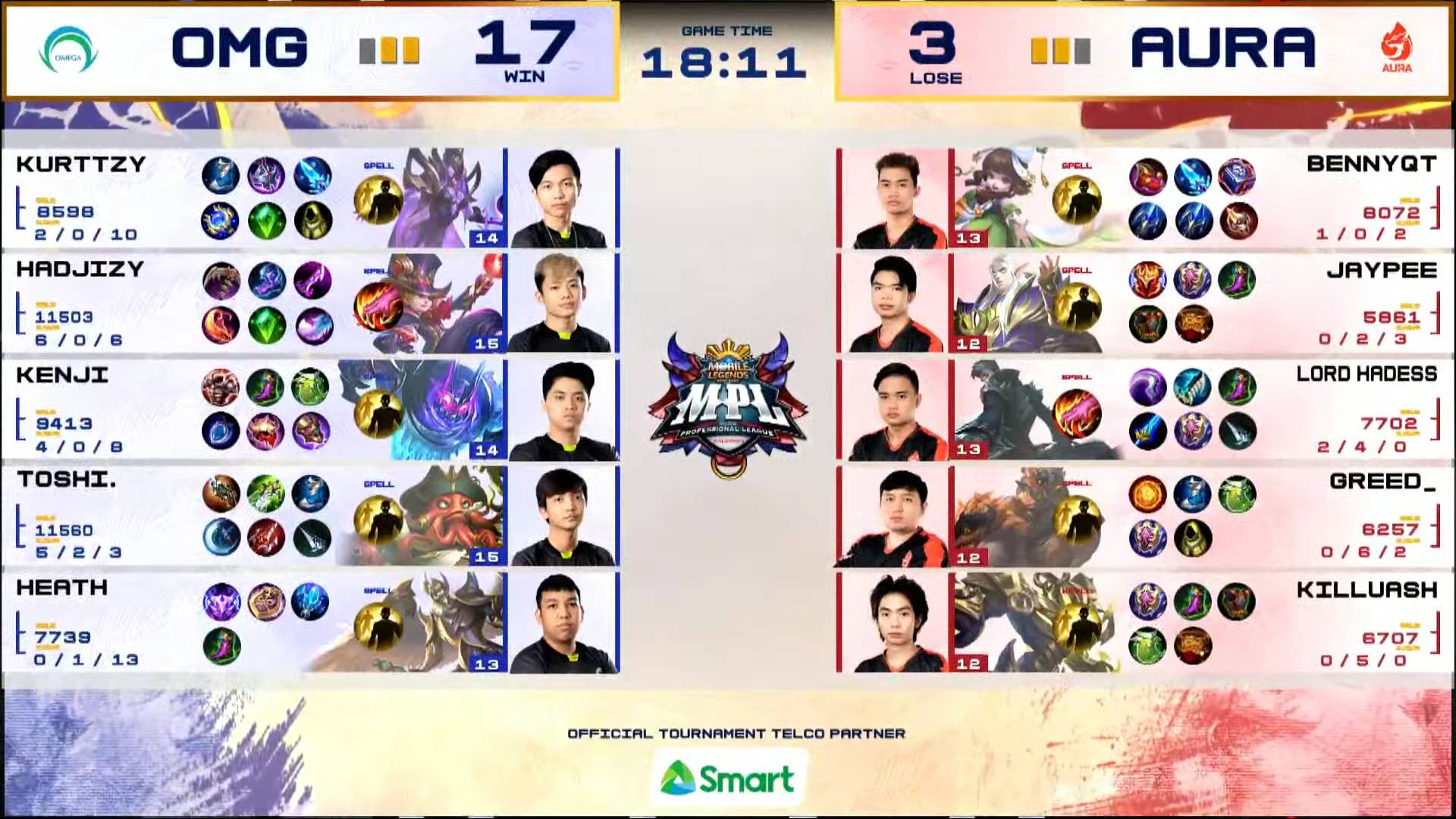 Aura PH will face the winner between the Bren Esports-Blacklist International upper bracket match-up on Saturday while Omega Esports, who fell down the lower bracket, will take on the victor between ONIC PH and Execration on Friday. 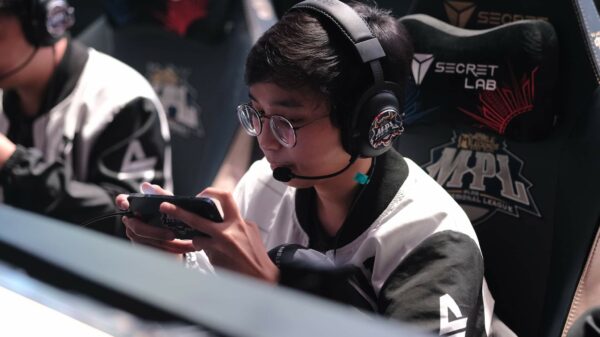 Blacklist International punched its ticket to the playoffs after sweeping ONIC PH, 2-0, in the second round of the MPL Philippines Season 10, Friday... 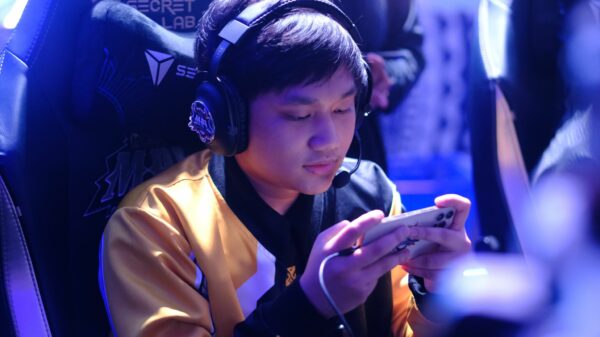