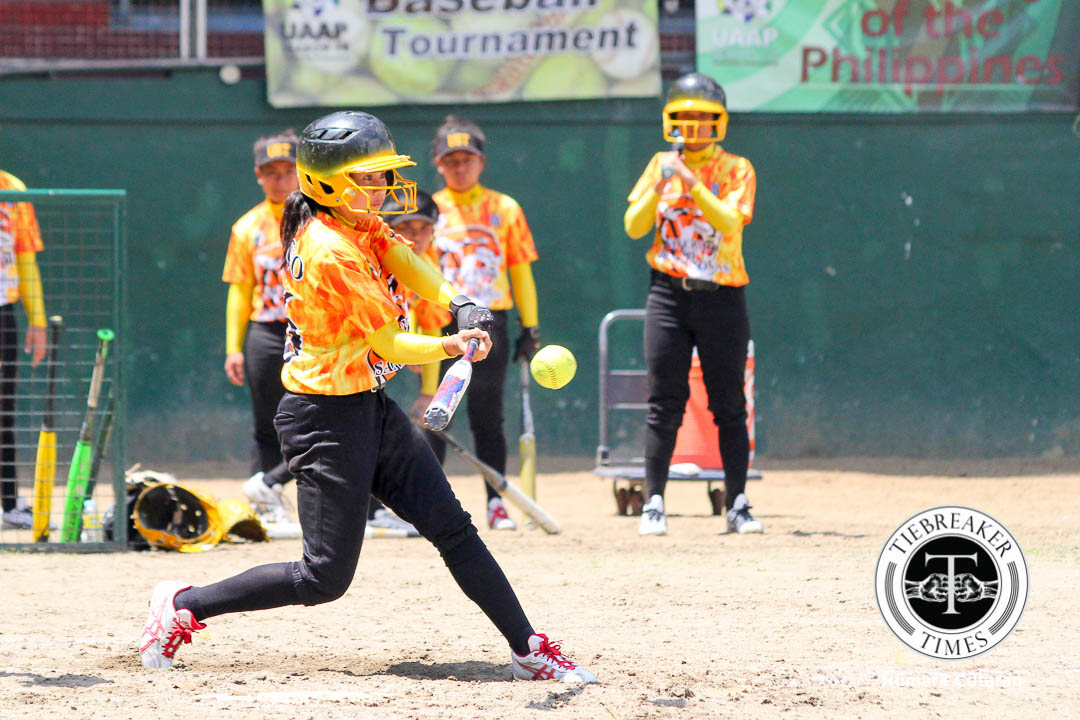 The Tiger Softbelles proved their mettle once again.

Despite having trailed in the game early, the University of Santo Tomas Tiger Softbelles clicked with a huge five-run spree in the fifth inning to complete a come-from-behind victory against the National University Lady Bulldogs and snared the other Finals ticket in the UAAP Season 78 Softball Tournament, 8-4, Monday at the Rizal Memorial Baseball Stadium.

National University rose to an early lead, taking advantage of the erratic pitching of UST starting pitcher Ann Antolihao. The first two batters of the Lady Bulldogs, Dyan Arago and Kristine Acuña, reached base after a walk and a hit off Antolihao. Rookie Aimee Watson then scored Arago for the breakthrough run. Acuña then followed it up with another as Shaira Damasing fired off a double to deep center. With a runner on second, Antolihao was momentarily called off to the dugout, paving the way for Hazel Anque to finish the inning after retiring Charleslyn Tulalian.

The Bustillos-based team added another run in the third inning after Watson crossed the plate as Tulalian got first base off a fielding error by Jessie Belaño. However, Mia Macapagal was caught stealing home as the Tiger Softbelles took it from here.

The Tigresses started to claw back into the game in their end of the fourth inning. CJ Roa gained second base after an overthrow by NU third baseman Damasing. At the next at bat, Mallows Garde then rolled on a grounder to deep left and scored Roa, but the former was caught stealing second for the first out. In a consequent play, Charm Oria gained first base off another miscue before adding another run to put the Tigresses trailing just one, 3-4.

After holding off the Bulldogs at the top of the fifth inning, UST then put on a show at their turn at bat. Graduating Arlyn Areglado started the onslaught with a base hit, which was followed up with another single from Hannah Dela Torre. Catcher Christine Palma then loaded the bases for the Softbelles for the potential runs. NU substitute pitcher Leila Tarroza then felt the pressure as delivered four balls to Garde, allowing Areglado to clinch the tying run. Oria then drove in a huge double to the right field to send Dela Torre and Palma home, putting UST up at 6-4. The Lady Bulldogs almost stopped the bleeding, but a failed fielder’s choice attempt on Belaño brought in Garde and Oria for two more runs to etch the final score, 8-4.

Despite several hits by the Lady Bulldogs in the succeeding innings, the Tigresses pulled off all stops with their vaunted defense to seal the deal. Antolihao completed her own turnaround as she took the Tulalian grounder and threw it to her first baseman Janah Hernandez for the final out.

Fifth-year Charm Oria and sophomore Belaño both registered huge outings with perfect 2-on-2 hitting, and drove in 2 RBIs each. Antolihao shook off her poor start and allowed only a run in the next five innings. Rookie Watson anchored her team on offense with a 2-of-4 hitting and scoring a run.

The UST Tiger Softbelles will face the Adamson Lady Falcons in the first game of the Finals on Friday, March 10 at 8:30am. On the other hand, the NU Lady Bulldogs finish the tournament at third place.