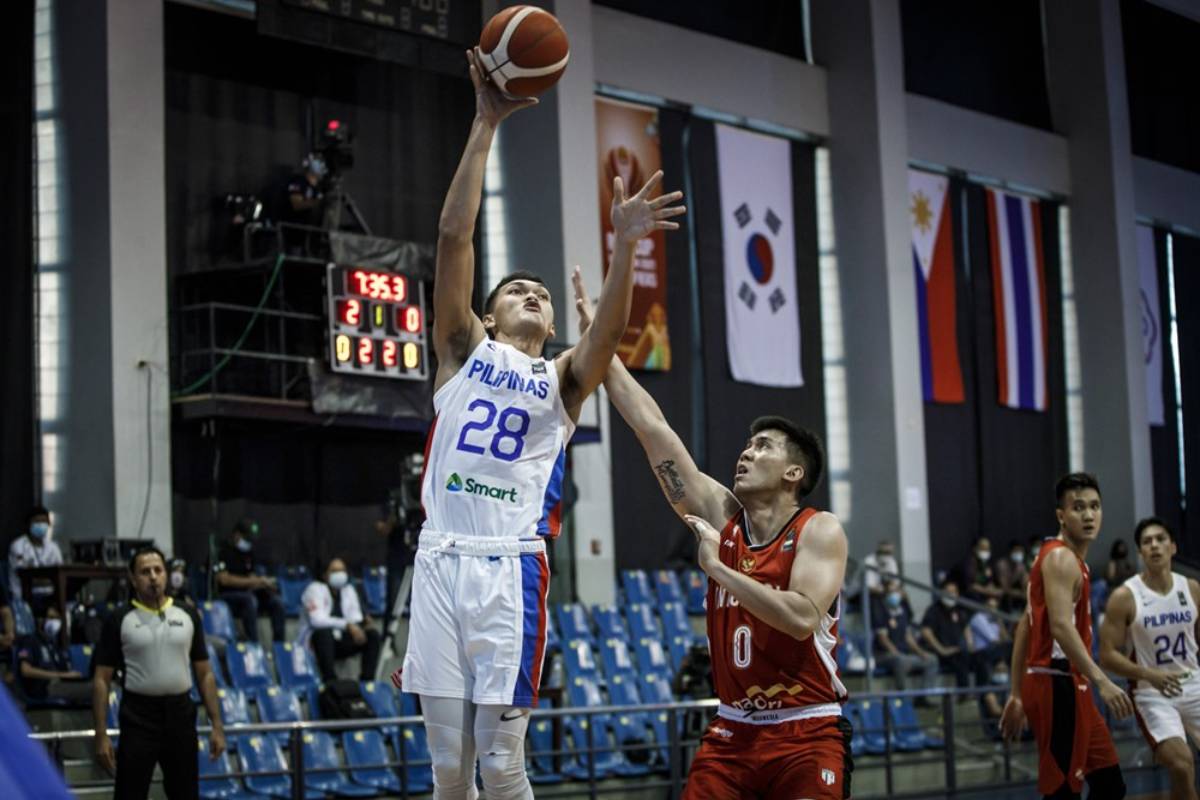 Gilas Pilipinas bucked a sluggish start before beating Indonesia, 76-51, to remain unblemished in the 2021 FIBA Asia Cup Qualifiers, Friday evening at the AUF Sports and Cultural Center in Angeles, Pampanga.

The young Filipino dribblers found their groove in the third canto and rode that wave of momentum on the way to collecting their second win in as many games in the Clark Bubble, and fifth overall to remain atop Group A.

“We looked a little bit like what I thought we might look like early in this campaign. We didn’t settle down. We tried to push the tempo when we’re not yet ready to be an uptempo team,” offered head coach Tab Baldwin.

Justine Baltazar shone brightly in the triumph with his 11 points spiked by two triples, together with nine rebounds, a steal, and a block in 25 minutes.

Naturalized center Ange Kouame made 11 markers as well, with five boards and a steal and a block each. Dwight Ramos turned in a double-double performance with his 10 markers and 12 caroms, and added three steals.

The troika, together with Kai Sotto and the debuting LeBron Lopez, joined forces for a 13-0 run that turned the tide as it widened Gilas’ narrow three-point lead to a 48-31 advantage with 2:27 remaining in the third.

The home team then cruised to the victory that marked another conquest of its ASEAN rivals — the same team a ‘hybrid’ Gilas crew blew out by 30 in Jakarta in the Qualifiers’ opening window back in February of last year.

“We came out of halftime with a different attitude towards one another. We played much better but I think we should blend the two: A team that could play with tempo and also with discipline,” Baldwin said.

“And certainly, we aren’t there yet,” added the American-Kiwi mentor. “But it’s very early for these young basketball players, so it’s a great learning experience for us. We will improve because of that first half.”

Lopez, who’s just 18 years young, was among those who made their presence felt in the triumph. He registered eight points, five rebounds, a steal and a block in the nine minutes and 41 seconds he saw action in his debut.

“The most impressive thing about Lebron is that I could see that there was excitement there, but he made an effort to be composed and to do the little things right at both ends of the floor,” said Baldwin.

The victory, however, came with a cost. Carl Tamayo suffered a left ankle sprain at the 7:47-mark of the fourth quarter when he landed on the foot of Indonesia veteran Arki Wisnu. He left with six points to his name.

Those points of his came from back-to-back three-pointers that propelled Gilas to a 59-38 lead with 8:09 in the said period.

Baldwin and Gilas now have their sights set on another showdown with South Korea on the final day of the tilt on Sunday, June 20, at 3:00 p.m.

Lester Prosper, meanwhile, led Indonesia with 22 points, eight rebounds, and four blocks as he was the lone double-digit scorer for Timnas.

The Indonesians have fallen to 1-4 as they remain winless in Clark. They look to end their run on a high note versus Thailand also on Sunday.