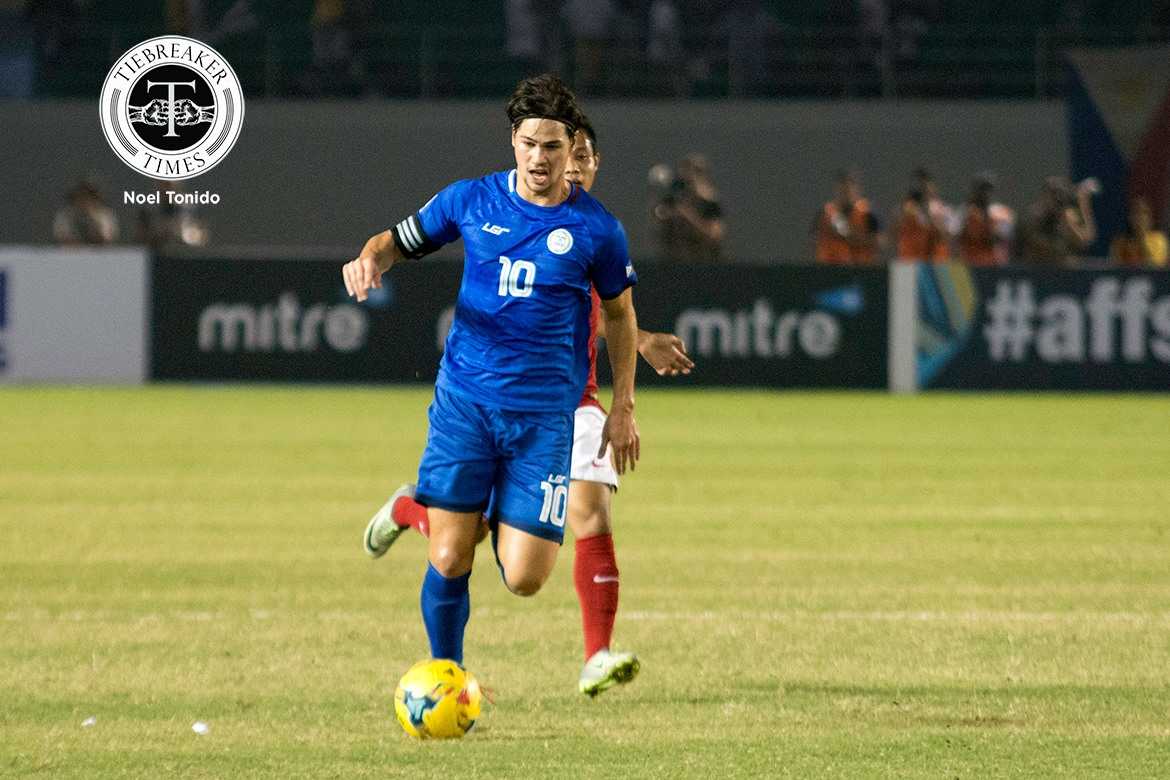 In a seven-goal thriller Tuesday evening at the Respublikanskiy Stadion in Dushanbe, the Philippine Azkals survived a determined Tajikistan team when they emerged 4-3 winners in the Group F meeting of the 2019 UAE Asian Cup Qualifiers.

The Azkals were led by Javier Patiño, whose brace was completed by a strike a few minutes before and after halftime. The two-goal display wasn’t the only thing he brought to the table after, he also provided assists to stunning strikes from Phil Younghusband and Daisuke Sato. As for the home team, three different players finding the back of the net made sure that the contest, which looked to have been virtually over at one point, went down the wire.

The opening minutes were a dull affair, as neither generated real danger to bother each other in the first 20 minutes or so. In that period, the hosts looked to have settled more quickly but seemed to play with a shortage of creativity in their attempts to break down the Philippine defense. On the other hand, the Azkals found it difficult to maintain possession, so it may have come as a surprise to many when they were the ones who first rippled the back of the net.

Twenty-four minutes into the duel, Mike Ott came up with a neat finish that swung the ball past Tajikistan goalkeeper Abduazizov Makhkamov. Unfortunately for the team mentored by former US captain Thomas Dooley, the younger of the Ott brothers was offside in the process and even got booked for dissent over the disallowed goal.

Moments later, the Central Asian team, also affectionately known as the Persian Lions, tested Patrick Deyto for the first time. The Filipino goalkeeper playing for Global-Cebu passed the first of many shots on target thrown his way, a moment that proved significant just shortly. In their next attacking wave, the Azkals had a good opportunity to punish their opponents. Fouled around 25 yards away from goal in the 27th minute, Patiño presented Phil a platform to open the scoring.

Ever capable of whipping free kicks from those sorts of areas around the box, the Meralco-Manila marquee man weaved his magic in Dushanbe by looping it deceptively above everyone before sinking magnificently past the Kyrgyz club FC Alay keeper. It marked the 46th time that the Philippines’ record goalscorer found the back of the net.

Startled, the Tajiks lost poise and this encouraged the Azkals on the attack. After knocking on the door quite haphazardly, the Filipinos found what they were looking for, four minutes before the break. It was Patiño who formally stamped his name on the score sheet that time, as the 29-year-old forward benefited from both ugly Tajikistan defending and a clinical Mike Ott pass to double the Philippines’ lead.

And if Patiño’s first goal made it a difficult evening for the Persian Lions, the Azkals’ number 20 made it a whole lot tougher three minutes into the second half. Again a beneficiary of Mike Ott’s cunning vision, Patiño calmly rounded past Makhkamov before easily sliding the ball for a 3-0 lead to the Philippines.

Pegged as the favorites in the encounter, the Tajiks knew that another defeat would spell danger to their bid to qualify for UAE 2019. Accepting the challenge given to them by their Filipino counterparts, the hosts needed a goal from somewhere and fast, in order to salvage at least a point out of their first home game in the final round of qualifying.

Eventually, pressure yielded a glorious chance to the Persian Lions after Amani Aguinaldo committed a foul inside the penalty area. Bulgaria-based midfielder Parvizdzhon Umarbaev of Lokomotiv Plovdiv stepped up to take the spot kick which he did not waste, denying Deyto a clean sheet, at the very least.

Picking up momentum, the energized Tajikistan squad — with the backing of rabid home support — staggeringly reduced the deficit to just a single goal in the 61st minute — just four minutes after pulling a goal back. A lousy back pass from Junior Muñoz triggered the instincts of Istiklol’s Dilshod Vasiev. The forward was in no mood to spurn the chance as his finish put everyone in the stadium on their feet.

At that point, the Filipinos looked vulnerable to conceding another goal, as the men in red continued to pummel the white shirts midway through the second period. Fortune seemed to be the only thing that prevented the home team from completing a comeback when Deyto’s blushes were spared by the goalpost in the 70th minute.

Under siege, the Azkals remained sharp whenever they had the chance to attack, and despite Patiño unable to complete his hat trick when he didn’t make meaningful contact with a ball threaded by Iain Ramsay, the clever forward had the awareness to locate Sato. The CSMS fullback, after being given enough room, decided to fire a screamer from just outside the box. Fortune favors the brave indeed, as the former Global-Cebu mainstay smashed it past the hapless Tajik custodian.

It looked the best of the bunch and was a fitting way to end a captivating match, but Istiklol’s Manuchekhr Dzhalilov had other ideas. His 90th minute strike made the home crowd believe that they would at least save a point at home, something that they eventually failed to do, as the four additional minutes on the clock was not enough to rescue a result in their backyard.

#ReadMore  Phil Younghusband not dwelling on being a sub: ‘Hopefully, I’ll get more game time’

By beating Tajikistan, the Azkals are now sitting comfortably on top of Group F with six maximum points in the bag.

Earlier, a goalless draw between Nepal and Yemen meant that the Filipinos are two points ahead of their next opposition. Nepal, placed in third, have a slender one-point advantage over Tajikistan, whom they will host in the next round. The matches are scheduled to be played on September 5.