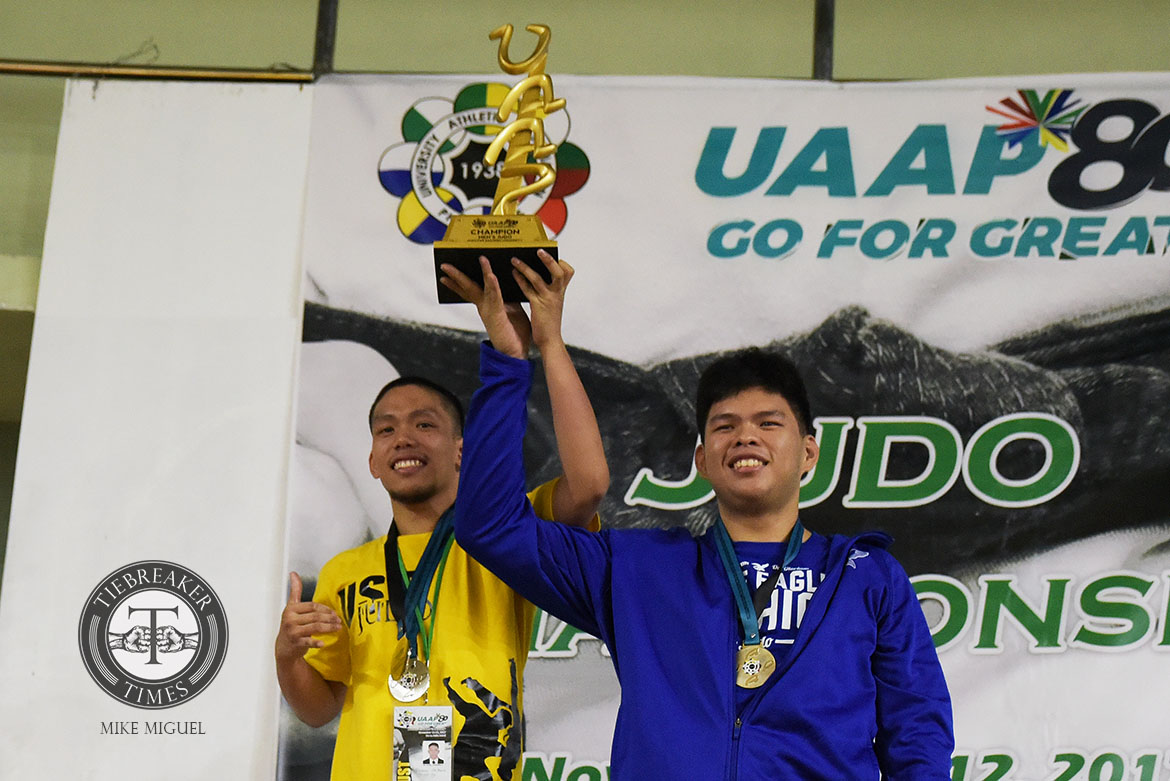 UAAP Season 80’s mantra is “Go for Great”, and the drama in the second and final day of the men’s judo championship was nothing short of great, reaching a fever pitch on Sunday at the De La Salle Zobel Sports Pavilion in Muntinlupa City.

Early in the afternoon, University of the Philippines junior and returning judoka Gabriel Salazar set the tone for a roller-coaster day with a stunning finish over former Rookie of the Year and Ateneo de Manila University’s Nico Clemente in the quarterfinals of the lightweight category.

Nonetheless, the day was all about how Clemente’s squad rallied to challenge reigning champions University of Santo Tomas’ slim six-point lead at the end of Day 1. The race for the other podium finish between the De La Salle University and the University of the Philippines was equally thrilling.

UST padded on the lead, however, after they took their third gold and their second silver of the tournament, as Daryl Mercado threw Sherwin De Rosa for a buzzer-beating win for the gold in the half-lightweight class. UP’s Edward Figueroa and skipper Hyesung Lee stopped their La Sallian opponents to take the all-important bronzes and points.

Needing to take the last push for the title, Blue Eagle Isaiah Tuazon, who just recovered from a surgery, won via a single waza-ari past De La Salle University’s Josh Oleta to clinch the featherweight gold. UST’s Russel Lorenzo had to settle for third-place in an all-Thomasian bronze medal match with Shergeon de Rosa, while the University of the East’s Raul Baldos, Jr. took the other bronze.

It boiled down to where the drama started — in the -66 kg category.

Blue Eagle Michael Isidro had to claim the gold for Ateneo to secure a solo lead in the overall championship.

In the end, and amidst the loud “U-nibersidad ng Pilipinas” cheers of almost the whole Pavilion crowd, it was Salazar who took the emotional win in the final match after throwing Isidro twice for waza-aris. Clemente pocketed Ateneo’s third bronze, while UE’s Nathan Morales pocketed the other.

When the dust settled on the mats, the battle went to the table.

With the points tied between the Golden Judokas and the Blue Eagles due to exactly the same three golds, two silvers, and three bronzes medal hauls, the tournament officials have decided to award both teams the UAAP Season 80 title.

On the other hand, Salazar and UP’s lone gold was not enough despite a deadlock in points with La Salle at 16, as Oleta’s and Borja’s silvers in the day were the difference in the second-place tally, and the Green Judokas once more finished third.