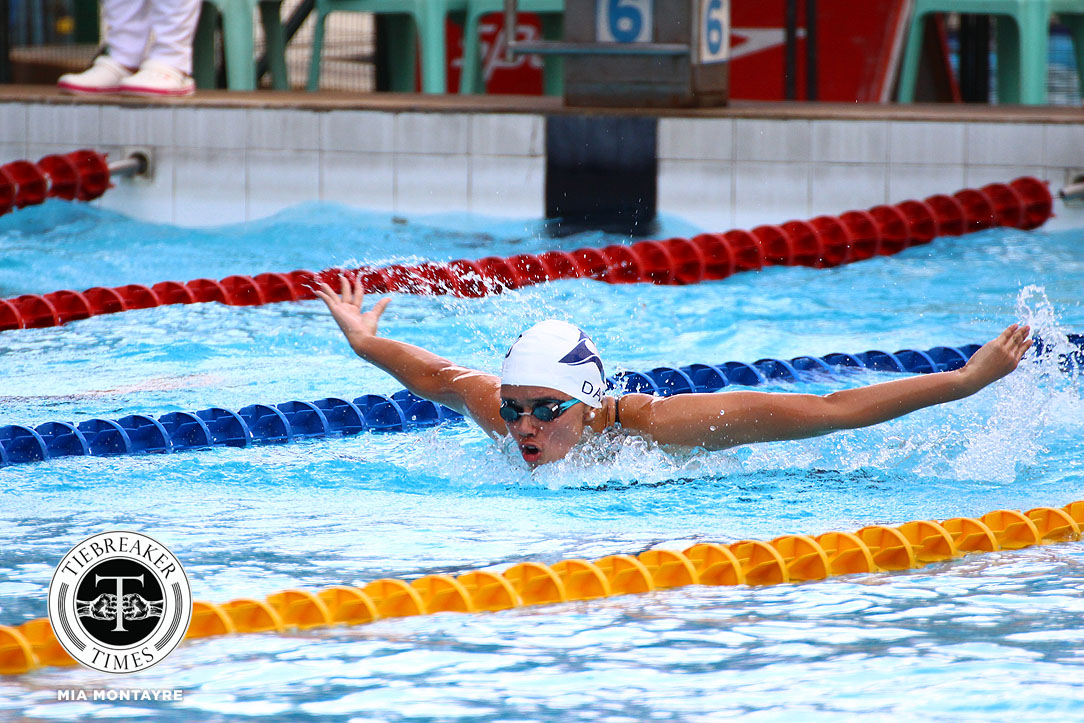 The UAAP Swimming Championships have played out the same way in the women’s division for over a decade now, where the Ateneo de Manila University establishes a substantial lead on the first day while the University of the Philippines slowly creeps up during the second and third days, before finally taking over in the final day of action.

With this scenario having played out in the previous season, where the Lady Eagles surrendered the UAAP title to the Lady Maroons, Ateneo came into Season 80 prepared to take on the challenge of regaining the crown they had lost in Season 79.

However, disaster struck early on in the first day of action, as the relay team of Ateneo in the 4x50m Medley Relay was disqualified for a false start infraction. The same incident in the same event had cost the UP Lady Maroons the championship in the 78th UAAP Season. Former members of the Lady Eagles, along with some fans, were left to wonder if this was going to be a case of déjà vu.

As they clung on to a vulnerable 29-point lead heading into the last five events, the Lady Eagles knew that no one or two individuals could help them seal the victory; rather, only an all-out team effort would help them secure their fourth UAAP Women’s Swimming title. With the team’s mantra this season “By All Means,” the Lady Eagles rose to the occasion and broke the Day 4 curse.

In each of the five remaining events, various members of Ateneo stepped up to contribute to the championship. The final session of the season began with an Ateneo 1-2 finish by rookie Courtney Gray (30.63) and Ariana Herranz (31.12). Gray also matched the 2011 record of UP’s Claire Adorna to emerge as co-record holder for the event. The De La Salle University’s Dara Evangelista spoiled the comeback efforts of UP by winning the bronze medal in 31.73.

The Lady Maroons quickly made up for lost ground by dominating the 200m Breaststroke, coming up with their own 1-2 finish by Joy Rodgers (2:50.56) and Pricila Aquino (2:51.88). Surprisingly, Lady Eagle Romina Gavino, who was never known for swimming breaststroke events, took the bronze medal in 2:52.38.

Ateneo made another strong push in the 200m Butterfly as super rookie Chloe Daos emerged as the gold medalist in 2:22.61, and Gavino immediately returned to the pool to finish third in 2:30.01. UP super senior Delia Cordero was the silver medalist in 2:25.73.

A new swimming Phenom was born to cover for the impending graduation of queen eagle Hannah Dato. After collecting six gold medals and one silver for a total of 102 points, Daos was proclaimed the Rookie of the Year and Most Valuable Player for Season 80, matching the feat of Cordero back in Season 75.

By then, Ateneo’s 49-point lead proved enough to deem the 4x100m Medley Relay irrelevant in the overall team standings. Still, the Lady Eagles fought with all their heart to win the event by all means possible. However, the outcome was UP’s Ma. Kristina Bartolome, Rodgers, Maria Gabriela Torres and Monica Padilla emerging victorious in 4:43.03, ahead of Ateneo’s 4:46.46 and UST’s 5:01.82.

By the tournament’s end, Ateneo had garnered a total of 483 points, ahead of UP’s 437. The University of Santo Tomas Lady Tiger Sharks narrowly edged the De La Salle University Lady Tankers for the podium finish with their 105 points against 92. The National University were fifth with 28 points.