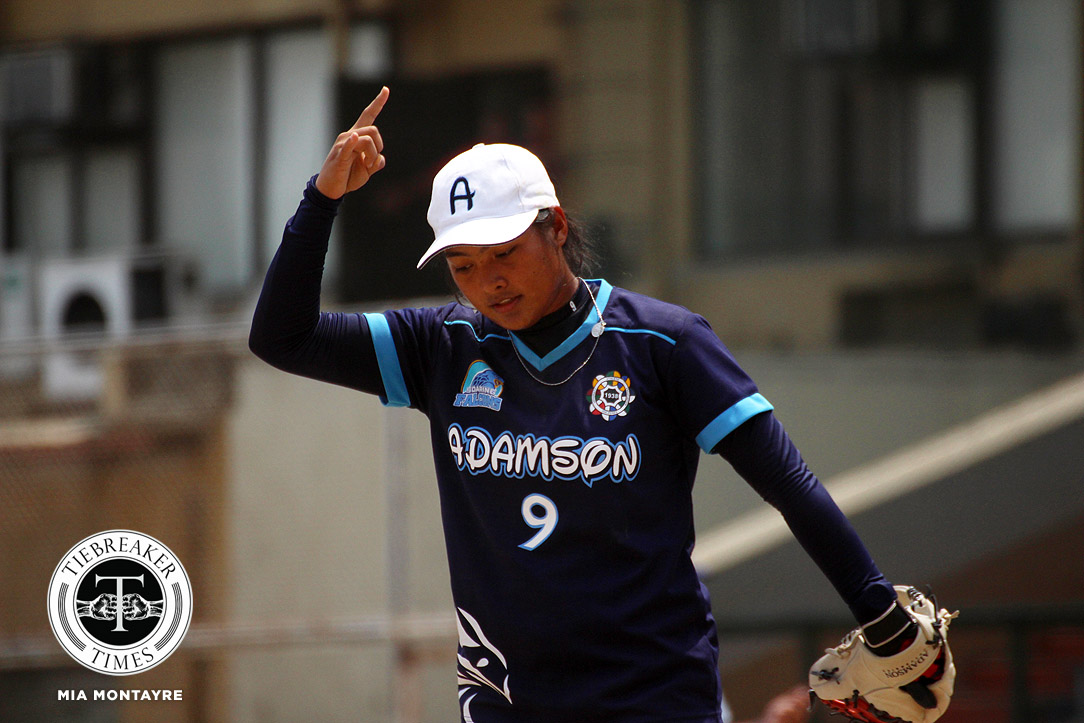 A win is a win no matter what.

The Lady Falcons secured the number 1 spot in the postseason for the 11th straight year with their 10th win of the season. They also push La Salle into a tug-of-war for the other twice-to-beat advantage in the semifinals.

The two teams tried hard but failed to breach the defense of the opposing squad in the first two innings, resulting in a scoreless deadlock that even extended to three in the side of the Lady Green Batters. It finally ended in the Adamson’s side of the third inning.

Center fielder Angelu Gabriel started it off with a single before she crossed the plate off slugger MJ Maguad’s hit in the following at-bat. The second baseman gambled on taking in more bases, but it backfired, as she was caught on second base. Krisha Cantor then almost put a runner in scoring position; unfortunately, her run to the third base was also cut off by the La Salle defense.

After another solid side on defense, the defending champions plucked another run in the fourth. Arianne Vallestero gained base on a solid hit, before advancing to third on a throwing error by La Salle rookie pitcher Kiana Juan to first base. Nicole Padasas stepped safely on second herself after forcing that error on the Lady Green Batter frosh. Remie Heero then sent the former NU Lady Lady Bulldog Vallestero for the 2-0 lead.

La Salle finally breached Adamson’s defense with Lyca Basa on the mound in the sixth inning.

Mercy Arroyo produced a base hit, but was forced out on second as Jamica Arribas got on first base safely in her stead. Second baseman Gladelyn Alipato then sent Basa’s pitch to the left to score her senior Arribas and cut the deficit to one, 1-2.

Nonetheless, the Lady Falcons finally connected on hits and produced more than a single run in the sixth inning. Vallestero forced another error off Juan, forcing La Salle head coach to call Arribas into the mound to replace the rookie. Padasas then capitalized on the pitching change and sent Vallestero home. Honey Alegarme then put Adamson at a comfortable 4-1 lead after she brought Padasas to the plate at the following at-bat.

The cushion was enough, as leading Best Pitcher Lyca Basa pulled off solid pitches one after the other to send the reigning queens to the semis with the twice-to-beat incentive. The pitcher got the save after allowing just two hits and an unearned run in nine batters she faced. Nonetheless, Bautista plucked the win for her own with a commanding three-hit stint in 17 at-bats on four innings.

The Lady Falcons (10-1) will take on the UE Lady Red Warriors (3-8) on Monday, March 18, to close out their preliminary round assignments. On the other hand, the Lady Green Batters (7-4) and University of Santo Tomas (7-4) will dispute the other twice-to-beat bonus on the same day.