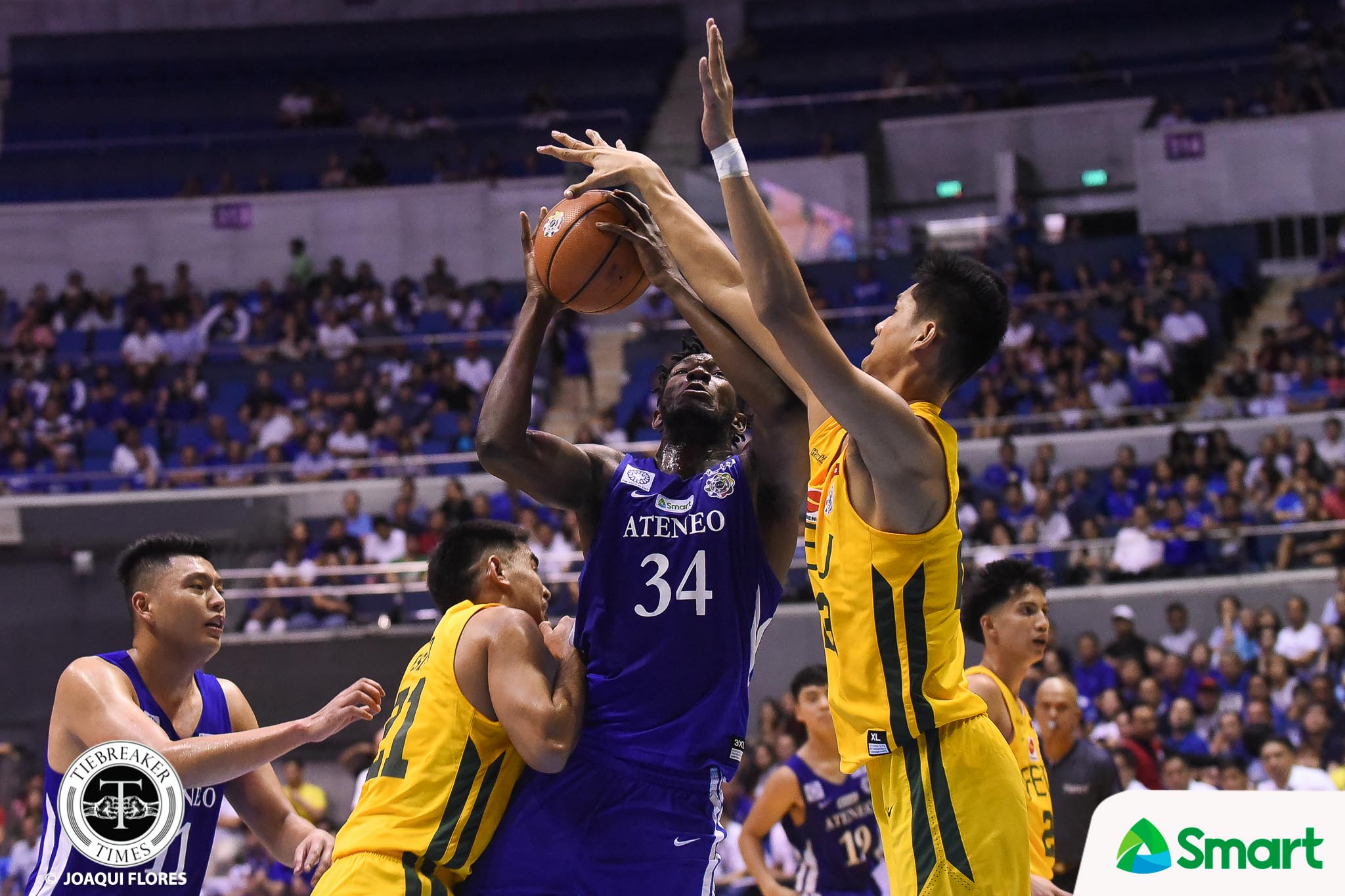 There has been no foreign student-athlete quite like Angelo Kouame for the Ateneo de Manila University Blue Eagles.

There was Zion Laterre, an Australian who was known for his defense. There was Kirk Long, a fellow American who was an excellent two-way player. Then there’s Chibueze Ikeh, a Nigerian who was the anchor of Ateneo’s defense during their championship run last season.

But Kouame is a different player.

Saturday afternoon, the 6-foot-10 native of Ivory Coast posted 33 points and 27 rebounds to lead Ateneo to an 82-62 win over the Far Eastern University Tamaraws.

According to league statistician Pong Ducanes, Kouame’s 27 rebounds are the most since 2003. His 33 points are the most for any Blue Eagle since Season 77. Moreover, his 30-20 game is the first-ever to be recorded in the Imperium-era.

And the Blue Eagles were ecstatic for Kouame. 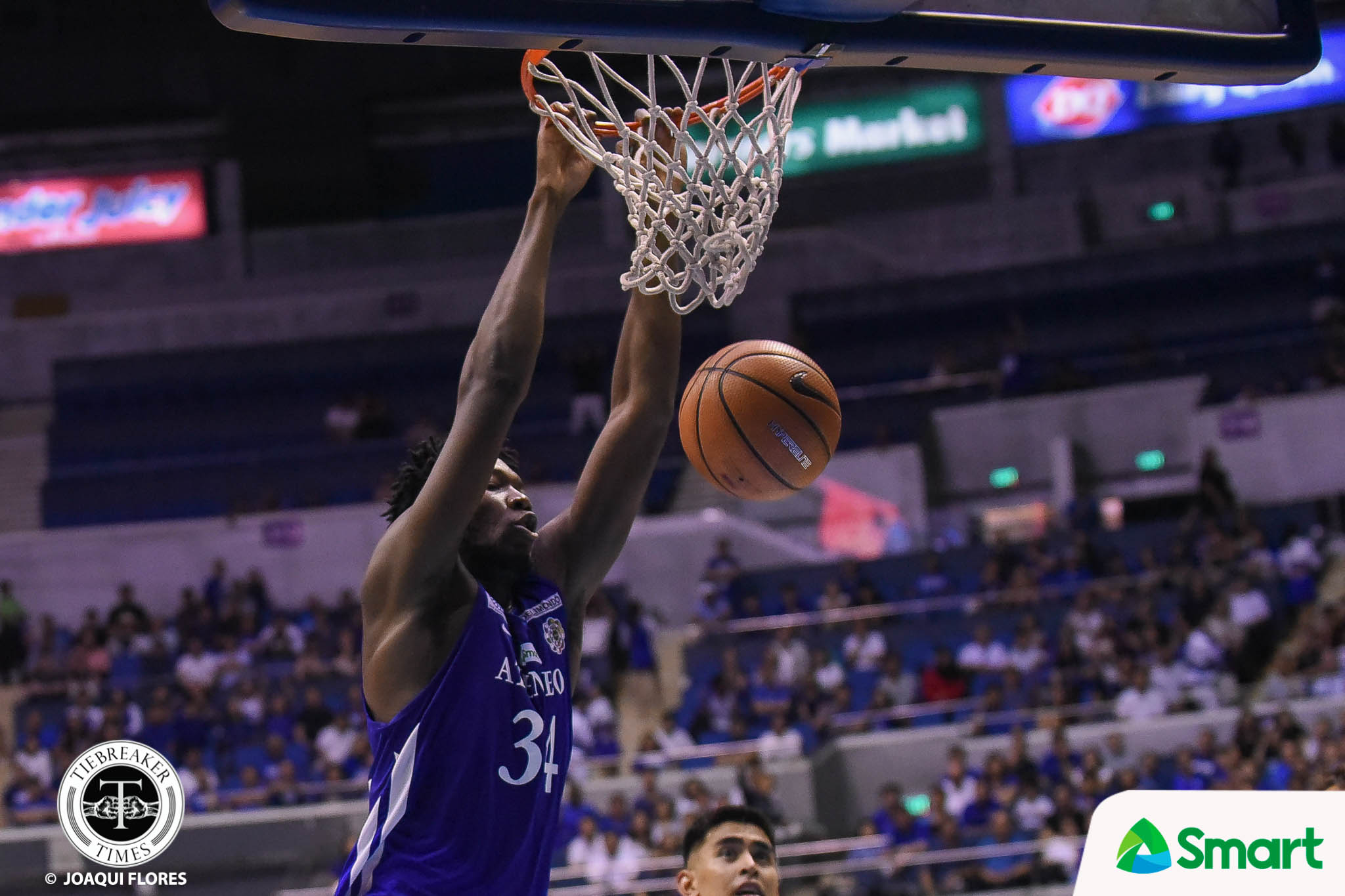 “I think generally, the entire team is happy for him,” expressed Isaac Go, whose minutes have plummeted to 16 minutes per game due to Kouame’s presence. “He did all the work. He’s the one who shows up at practice early, he’s the one who puts up the extra shots. So you have to put all the credit to him. I haven’t really did too much to ‘mentor’ him.

But when Kouame arrived at Ateneo last summer after graduating from the Multiple Intelligence International School, he was just… well, tall.

“First of all, he’s tall. All the other things just came and then he blossomed under coach Tab [Baldwin]. He’s a good developer of talent,” shared Blue Eagles assistant coach Sandy Arespacochaga. “I think that’s where he really blossomed you know.

“First, he’s just tall. Then other aspects of his game improve, you see some of it already. So we’re very happy with his development and we’d like to think of it that he’ll still continue to improve.”

With Baldwin developing his mindset, it was up to Kouame to put in the work. And his effort off the court has pushed the rest of the Blue Eagles to keep up with him.

“He’s really competitive in practice, really exerts himself. He pushes us to be better everyday.

“If you go up against him in practice, he just makes everybody better and work harder because we have to complement what he can bring to us,” added Go, who was the Chooks-to-Go/Collegiate Press Corps Most Pivotal Player last season.

Even if Kouame is a foreign student-athlete, the Blue Eagles’ staff have treated him like any other player they have. Just like what they did with Laterre, Long, and Ikeh.

“It’s interesting that you brought up the history of Ateneo with regard to foreign players, it’s good that we have his talent and his ability. He’s a very good student of the game, eager to learn, he’s a very big addition for our team definitely.

“When you mentioned na foreign player, naisip ko, oo nga pala foreign player kasi we think that he’s part of the team and not that someone who stands out,” said Arespacochaga.