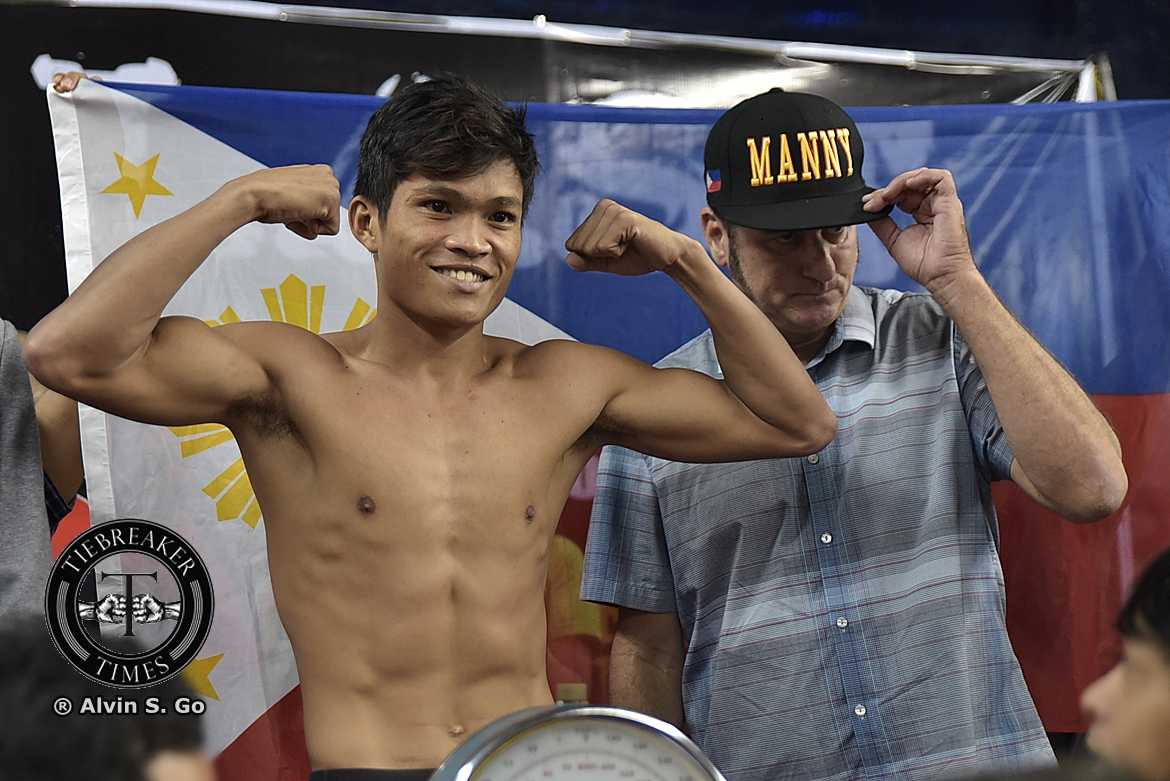 Challenging for the world title for the first time in his prizefighting career, the 24 year old “Pretty Boy” showed the makings of a true champion all throughout the 36 minute affair.

He did not back down against and instead put up a performance of a life-time against a world-ranked fighter. At one point, he was able to knock down the former Olympian and then-titleholder to stamp his class and more importantly, securing the victory.

Jerwin’s family members, boxing fans ,to even members of the Naval force witnessed the historical moment. everyone in attendance immediately celebrated with the new Filipino world champion right after the decision was announced, taking pictures and exchanging pleasantries with him.

Using his prowess to knock people out, the Davaoeno slowly climbed up the ranks. MP Boxing Promotions executive Joe Ramos is one of the firm believers in Ancajas’ capabilities from day one.

“First of all, all the credit goes to God. Jerwin really worked hard. He really, really worked hard for this,” Ramos told Tiebreaker Times after the fight. “At the end of the day, kami lang – si Joven, kami nila Sean (Gibbons), Michael (Koncz), Boss Manny, we prepared everything pero siya yung lumaban eh.”

“Dalawa lang sila diyan (sa ring) so he did all of the work aside from the blessing ng Panginoon sa kanya.”

“I was there in the corner listening, nakita niyo naman McJoe was knocked down by a body shot so alam mo yun? Jerwin just listened and did his work.”

One of Ramos’ concerns leading up to the fight was if the 24 year old southpaw will be able to perform against the level of competition like Arroyo. And now that Cavite City-based pugilist proved that he could perform beyond what is expected of him, a lot of opportunities will open for the newly-minted IBF titleholder according to Manny Paquiao’s chief assistants.

“Just like I told you during the press conference yesterday, we wanted to make sure na yung just to have the confidence like this is just a regular fight and natapos na niya yung mga kalaban niya dito sa Pilipinas

“Ngayon natalo niya world champion so we will have to prepare the next level for him. Who’s the champion sa ibang organizations so we’ll look at that,” Ramos said.

“For now we’ll celebrate this victory, we’ll bring him to Boss Manny to present his newest world champion. I think he’s our fourth world champion right now in the Philippines and this is a very big win for him,” he furthered.

With the IBF gold now on Ancajas’ waist, Ramos said that a possibility of fighting alongside with Pacquiao himself in the future is now a possibility – an opportunity most boxers only dream of.

However, the MP Promotions executive assured that keeping the champion near the people will always be a priority in spite of what he has recently achieved.

“You know at the end of the day, if we can afford, if we can still continue to keep him here, to keep him close to his fanbase and to the people who support him, we’ll keep him here,” he closed. “If the next title defense will be here, why not? If it’s in Las Vegas or where Senator fights, we’ll look at that also pero siyempre we’ll have to look to it also.”

“This fight definitely changed Jerwin’s life and we hope that we changed his life also.”

In this article:Jerwin Ancajas, MP Promotions