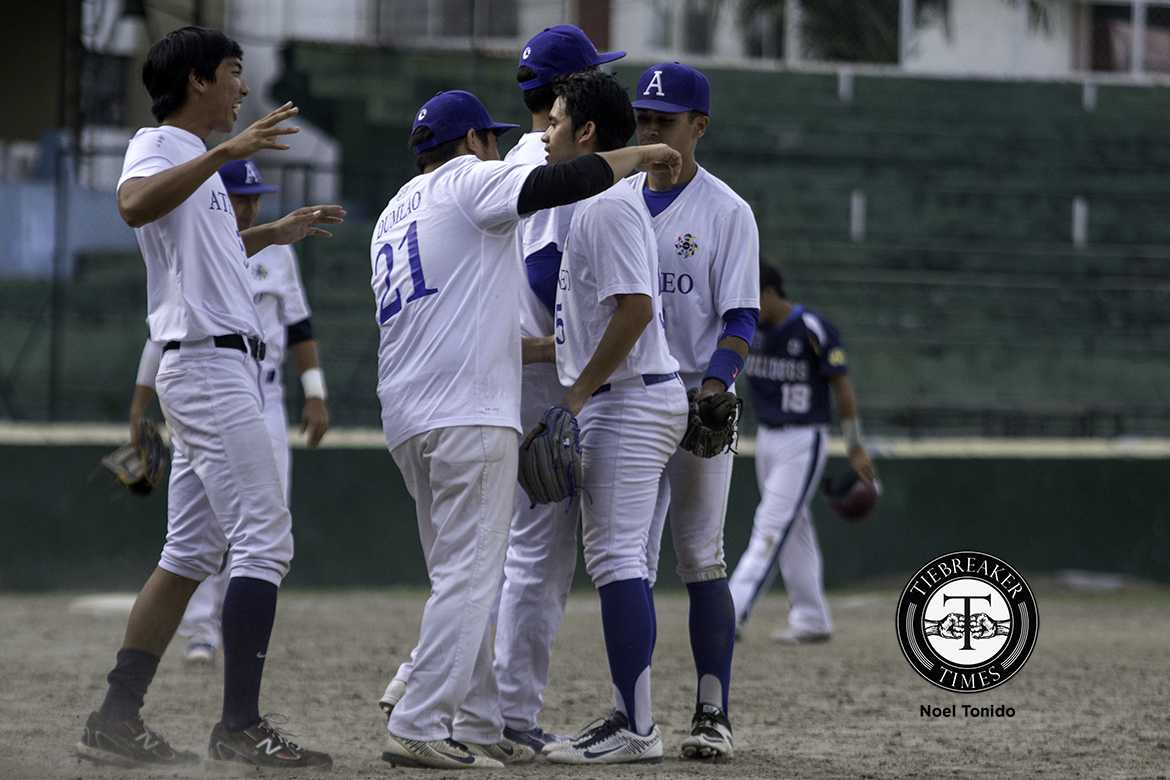 “To be prepared is half the victory.”

With the game tied at 3-all going into the late innings and with the momentum riding over to the National University Bulldogs, sophomore Dino Altomonte stepped up for the Blue Eagles in connecting with a huge double that brought in the game-winning run in Ateneo’s 5-3 win over the skidding Bulldogs to close out Thursday’s three-game slate.

Starting pitcher Paulo Macasaet and the Ateneo defense were in-sync to start off the game. The infielders of the defending champions displayed crisp throwing in the first six innings of the game that rendered the Bulldog offense helpless. Moreover, the 20-year old national team pitcher struck out five batters during that frame.

On the other end, the Blue Eagles, after a slow start, were able to pick up the scoring in the fourth inning of the game. With two outs, Chong Ramos was able to connect on a double against NU’s John Rey Presores to try and salvage the inning. A single by Ryon Tionloc brought home Ramos before being ousted at second base to give Ateneo a solitary run lead.

Filipino-Japanese rookie Kouichi Igarashi was hit by a stray pitch to open the inning while a sacrifice bunt by fellow rookie Marquis Alindogan moved him to second base. With lead-off batter Javi Macasaet connecting with a huge pop-up fly to left field, NU’s left fielder Ericson Villame committed a catching error that led to an Igarashi run and Macasaet gaining third base. A sacrifice bunt by pinch hitter Radito Banzon brought Macasaet home that extended the Ateneo lead to 3-0.

Just as they have always done during the season, the Bulldogs rallied back in one huge inning. The Bulldog rally came at the top of the seventh inning.

Cyruz Barit was walked due to balls to open the inning. Consecutive base hits by Clarence Caasalan and Azriel Villalobos soon followed that quickly loaded the bases for National University. The master strategist that he is, program director Randy Dizer told the defense to focus on home plate. It was successful as Barit and Caasalan were knock-off at home plate with the bases still loaded. However, a costly Ateneo fielding error with Julius Mondragon at bat led to runs for Villalobos, Maiko Sugimoto, and Jerome Tenorio that tied the game at 3-all.

Paulo Macasaet had to be relieved of pitching duties to start of the eighth inning for third-year pitcher Nacho Cojuangco. Cojuangco and the Ateneo defense were able to shut out the Bulldogs in the eighth inning with two flyouts and a strikeout.

An error by the Bulldogs opened the bottom end of the inning that gave former UAAP Juniors MVP Gino Tantuico base. The former Zobel standout was able to steal second base with Dino Altomonte at the plate. Altomonte calmly knocked a huge double to left field to bring home Tantuico. Dino was then subbed out for pinch runner and younger brother Johnny Altomonte. Ground outs of Ramos and Tionloc after gave Altomonte the way to gain home base as confusion ensued among the NU defense. The inning ended with Ateneo up 5-3.

“It was a hard game. Paulo pitched well and we only started scoring mid-game. We started to slow down after and they stormed back,” Dino Altomonte said after the game. “Fortunately we woke up and started hitting again.”

The Bulldogs tried to make one last rally in the final inning. After a ground out and strikeout of the first two batters, Cojuangco accidentally hit Aprix Santos with a pitch while Tenorio connected with a single to try and staged a two-out rally. It was not to be, however, as Mondragon’s flyball was caught at center field to give Ateneo the win.

After their loss against the Green Batters, Altomonte admitted that the team had been struggling due to the rigorous schedule of the UAAP. “We’re just tired. The schedule’s tough. We’ve been training M-W-F then go to class. The UAAP schedule’s tough and it tested our stamina,” the sophomore added. “Hopefully, this makes us stronger for the Finals.”

The Ateneo Blue Eagles will have the UP Fighting Maroons (1-6) as their assignment on Sunday, February 26 at 7:00am. Later in the day, the NU Bulldogs look to break out of their funk against the UST Golden Sox (2-5) in the last game of the day.