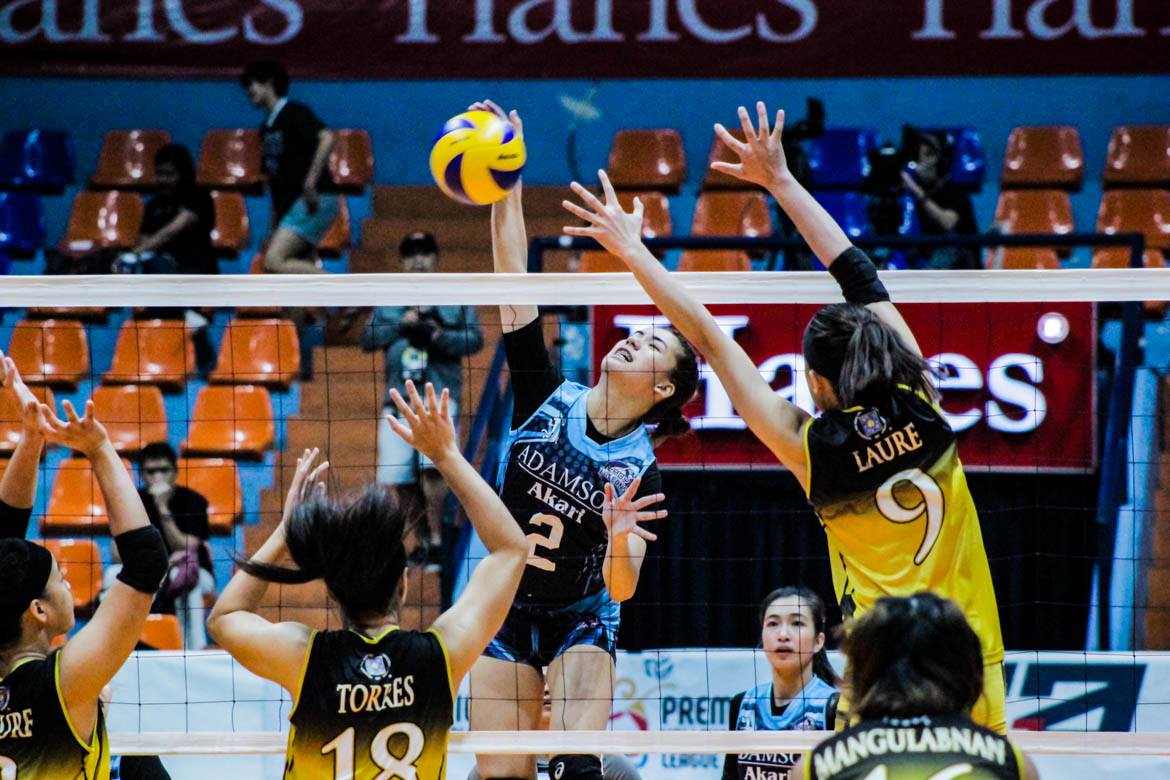 Lucille Almonte took over down the stretch, while Trisha Genesis flaunted her all-around brilliance as the Adamson University snatched Game One of the 2019 PVL Collegiate Conference best-of-three title series, Wednesday.

Adamson figured in a seesaw battle in the final chapter of a frenetic match, holding on a slim 9-8 edge. Genesis then nailed an off the block hit that sparked three unanswered points for the Lady Falcons, who cushioned a 12-8 advantage.

Still, the Golden Tigresses refused to go down without a fight. Through their stifling net and floor defense, they forced Adamson to commit consecutive attack errors that sliced the deficit down to two, 10-12.

From then on, though, Almonte zeroed in and cast herself in the hero role. She pierced through EJ Laure’s single block with a blistering kill, before going down the line in the ensuing sequence to put her team at match point.

The elder Laure then tried to pump life into UST’s offense with an off-speed hit. But Almonte smelled blood and went for the jugular, hammering down a kill that pushed Adamson closer to the elusive gold.

Almonte — a rookie out of Kings Montessori — finished with 15 points, all but one coming from attacks. But while it was the neophyte who showed the way down the stretch, Adamson sophomore Genesis shouldered an all-around role throughout the game.

Genesis flashed her double-edged arsenal with a triple-double performance. She fired 21 markers anchored on 19 attacks, while collecting 20 excellent receptions and 16 excellent digs.

The reliable troika of Ceasa Pinar, Lorene Toring, and Louie Romero made their presence felt as well, churning out solid contributions in the statement win over the Golden Tigresses.

Meanwhile, the trio of EJ and Eya Laure and Imee Hernandez saw their stellar offensive production go down the drain.

Eya had 19 points from 16 attacks and three kill blocks, while lacing it with 25 excellent digs. Her elder sister, EJ, chimed in a double-double outing with 15 markers and 12 excellent digs. Hernandez also chipped in 15 points in a losing cause.

Game Two is slated on Saturday, October 12, at the same venue.