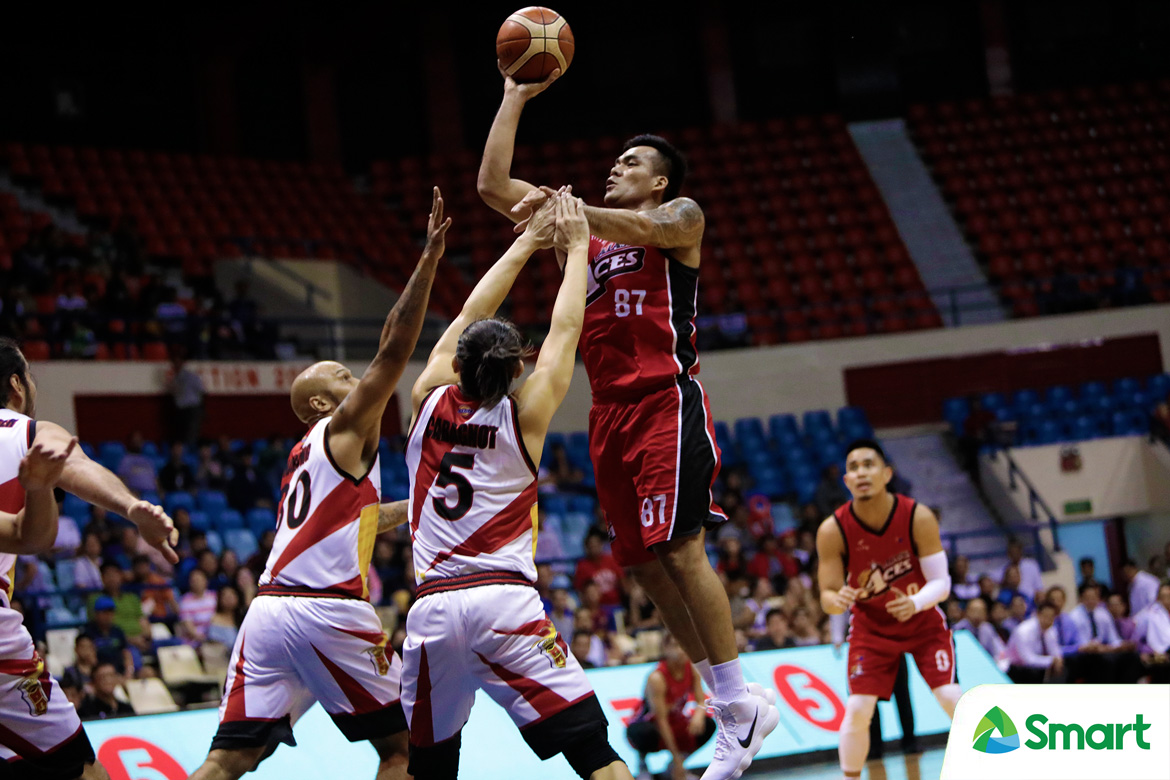 The Alaska Aces displayed the form that lifted them to the second seed this 2018 Commissioner’s Cup and stifled the San Miguel Beermen, 125-104, to avoid getting swept in their best-of-five semis, Friday night at Ynares Center, Antipolo.

The series is now at 2-1, and the Aces have a chance to send the series to a do-or-die match in Game Four on Sunday, July 22, at the SMART Araneta Coliseum.

Tonight was the Aces’ first must-win game in the conference playoffs in two seasons, as per the league’s stats chief Fidel Mangonon. The last time Alaska won a do-or-die game in playoffs, they went on to reach the Finals – in Game 5 of their best-of-five semis series versus the Meralco Bolts in the 2016 Commissioner’s Cup.

Vic Manuel returned to his old ways, as he finished with 24 points on a 52 percent-shooting clip. Diamon Simpson, who hurt his ankle in the third quarter, produced 21 points and 15 rebounds, while Jvee Casio chimed in 15 markers.

“It just felt like one of those days,” said Alaska head coach Alex Compton, beaming over the way his wards shot the ball, as Alaska made 51 of their 103 shots from the field, with 10-of-22 coming from beyond the arc.

“I thought everybody contributed, at a time that we’re very down. I love my guys. Were down 2-0 in the best team in the league, but ang hiningi ko sa kanila, lalaban tayo hanggang sa huli, and lumaban sila,” he added.

Alaska put on a show late in the third quarter, as they turned a slim three-point lead to 17, 94-77, at the end of the period after an overwhelming 17-3 scoring blitz – capped by Vic Manuel’s freebies – with six seconds left.

The Beermen then never had a chance to fight back as the Aces countered. The Milkmen’s lead ballooned to as huge as 23, 106-83, after Simon Enciso’s jumper went in with exactly eight minutes left to play.

Enciso flirted with a double-double, finishing with 10 points and eight assists.

Renaldo Balkman paced the defending champions with 28 points and 11 rebounds against seven turnovers. June Mar Fajardo had 18 points and 15 caroms, and Christian Standhardinger made 10 markers and six boards.

Mangonon added that the 21-point loss is SMB’s worst defeat this season and worst defeat in the playoffs since being eliminated by Barangay Ginebra San Miguel 117-92 in Game 5 of 2016 PBA Governor’s Cup.