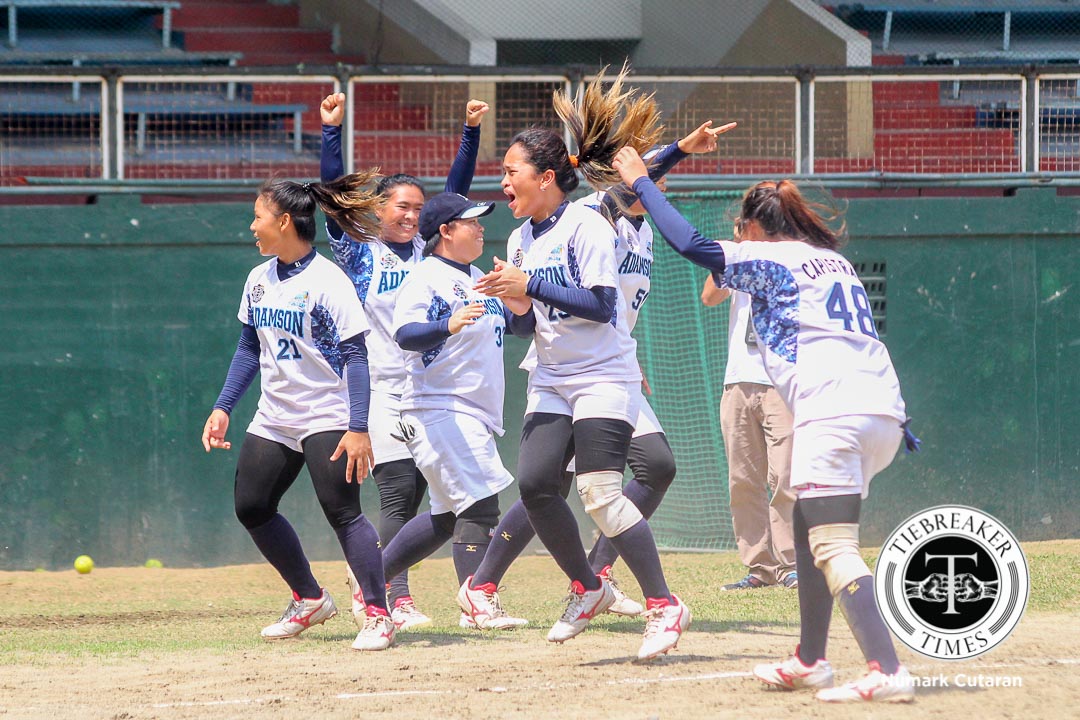 With the end of The Streak still lingering, the Adamson University Lady Falcons had to dig deep against rivals University of the Philippines Lady Maroons.

Sophomore pitcher Riflayca Basa, closing the game for the struggling Annalie Benjamen, was able to hold the Lady Maroons in the final two innings, while the offense delivered in the sixth inning in a 7-6 win to advance to the UAAP Season 78 Softball Finals for the sixth straight season.

Reigning MVP and Best Pitcher for UAAP Season 77 Benjamen was amazing on the mound in the first two innings of the game. She fanned out four out of the seven batters in the inning during that span, including a complete shut-out of the second inning.

However, on the other end, the Adamson offense continued to struggle coming from the UST game. During the first two innings, the high-powered Lady Falcon offense was limited to just one hit, while their connections were low that were easily grounded out by the UP infielders.

Benjamen’s struggles were highlighted in the third inning that led to a four-run inning for the Lady Maroons. A single by MJ Abanes started the inning, while a sacrifice fly by Jhenn Alinsod moved her to second base. After a fielders choice knocked off Abanes at third base while Penales gained base, rookie Kier Ferrer and Swing dela Cruz were able to gain base to load up the bases for the Diliman-based squad. With two outs and two strikes against her, UP junior Chanti Bongat slammed a huge over-the-offense grand slam home run to center field to put the Lady Maroons up 4-0.

With their backs against the wall, the top of the Adamson batting order delivered at the bottom end of the same inning. Riezel Calumbres connected with a base hit. Right at the first pitch, Lorna Adorable was able to bring home Calumbres with a single to second base. After struggling for the majority of the second round, Queeny Sabobo powered her way to an RBI single to cut the UP lead to just two runs.

UP’s offense continued to connect against Benjamen in the middle innings of the game. Cochise Diolata’s base hit opened the fourth inning. Cai De Luna, pinch running for Diolata, was able to move to third base after a sacrifice fly by Maki Cabriana and a steal of third base. A sacrifice fly by MJ Alinsod brought her home to give UP a 5-2 lead.

At the top of the fifth inning, Ferrer was able to punch in a run coming from a Bongat single after a full count. After giving up seven hits in the five innings she pitched, Adamson head coach Ana Santiago was forced to retire Benjamen from the game in favor of sophomore Riflayca Basa.

On the other end, the UP defense managed to hold Adamson in the fourth and fifth innings, including a huge F4-5 double play to knock-off Gelyn Lamata and junior Delyrose Covarrubias to close-out the fifth. However, the heart of a champion was still there for the five-time defending champions.

#ReadMore  UAAP Men's Football Tournament: Points of Discussion Ahead of the Business End

An error by MJ Abanes against Benjamen opened the bottom of the sixth inning while a single by Angelie Ursabia gave Adamson two bases. The bases were soon loaded after Krisna Paguican was hit by a stray Diolata pitch. An attempt to throw out pinch runner Leslie Benabaye resulted in a run for her, while Paguican and Ursabia were able to gain home afterwards to cut the UP lead to just a solitary run.

A catching error by shortstop MJ Alinsod after a flyball of Adorable brought home Calumbres to tie the game. After a single by Sabobo and a walk of Lamata, the bases were once again loaded for the Lady Falcons. A sacrifice fly by rookie Covarrubias, her biggest hit in her young UAAP career, finally gave Adamson the lead 7-6.

Basa then held her own to close-out the game for the Lady Falcons. The sophomore struck out Alinsod for first out. A Gelai Penales grounder for a base hit came after, but an amazing catch by left fielder Krisna Aguican followed for the second out of the game. An easy flyout of Swing dela Cruz to shortstop Queeny Sabobo closed out the game that punched Adamson’s ticket to the finals.

Winning pitcher Basa, in the two innings she pitched, only allowed one run and one hit. She was also able to strikeout four batters. On the other end, Lorna Adorable paced the offense in going 2-for-3 at-bat. She connected on two singles that led to an RBI while punching in two runs as well.

The Adamson Lady Falcons move on to the Finals as they face the winner of the University of Santo Tomas Tiger Softbelles/National University Lady Bulldogs semifinals series. The best-of-three Finals series is set to begin on Friday, March 11 at 8:30am. The University of the Philippines Lady Maroons will finish the tournament at fourth place.