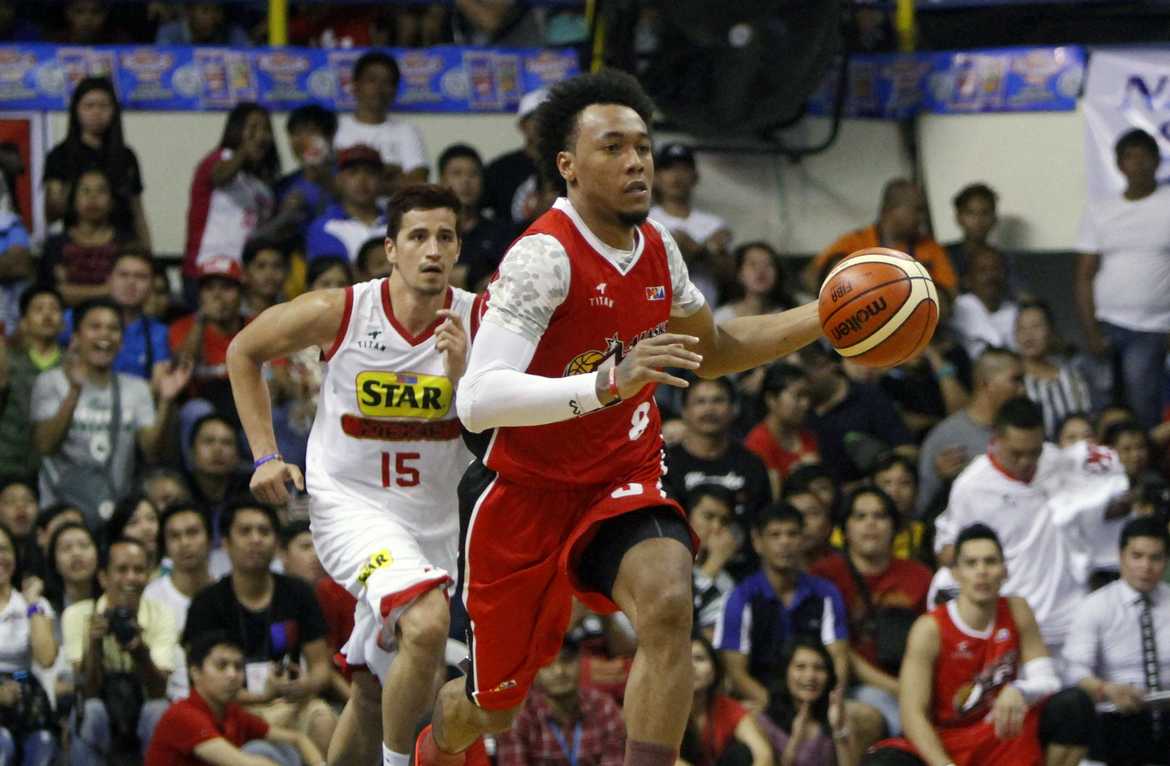 Despite a herculean outing by Star Hotshots import Ricardo Ratliffe, the Alaska Aces, led by “The Beast” Calvin Abueva, waylaid the Hotshots in the final quarter en route to a 100-92 victory Saturday evening at the USEP Gym in Davao City.

The Aces were able to get the upper hand in the opening salvo behind Calvin Abueva and Sonnny Thoss for an early 19-12 lead. However, Allein Maliksi drained back-to-back triples to start the second quarter to quickly cut the Alaska lead. The two squads then figured in a shootout, as PJ Simon and Mark Barroca were able to drain triples to keep pace with Alaska. The two teams ended the half tied at 38-all.

Thanks to Ratliffe, the Hotshots were able to gain a 49-43 lead three minutes into the third canto. Shane Edwards was then penalized with his fourth foul of the game, after fouling Mark Barroca while attempting a three-pointer with seven minutes left in the quarter, which led to Star taking a 54-47 lead. Chris Banchero and Thoss were able to lift Alaska on their backs to close out the quarter, as Alaska were just down two, 70-68, entering the final frame.

The Aces went on a 9-2 surge to start the final quarter through the combined efforts of RJ Jazul, Eric Menk, Cyrus Baguio, and Abueva. Ratliffe, though, continued to power his way against the Alaska frontline, as he scored nine straight Star points to carry the Hotshots on his shoulders. However, Jazul was able to answer with five points of his own to give Alaska a solitary point lead, 82-81, with six minutes left in the game.

Abueva then continued his stellar play, much to the delight of the Davao crowd. The Beast scored seven points in an 11-6 rally that gave Alaska a six point cushion, 93-87, with three minutes to go in the game.

With 1:27 remaining and Alaska holding a 96-87 lead, free throws by Pingris and a triple by Maliksi gave Star a chance, but Banchero was able to answer back with four straight points to close out the game and give Alaska their sixth win of the conference.

Calvin Abueva led the Aces with 21 markers on 8/14 shooting and six boards in just 23 minutes of action. “I thought we had numerous players that stepped up,” Compton said after the game. “Obviously, Calvin kinda took over the game there in a stretch in the fourth quarter.”

Four other Aces scored in double-figures. “Chris Banchero played well. RJ Jazul did stuff that you don’t really see in the stats sheet. Dondon did smart things too,” the Alaska mentor added.

Outside of those two, everyone else shot poorly in the game, as Star were a dismal 35% from the field, 22% from beyond the arc. On the other hand, Alaska were 52% from the field.

The Alaska Aces (3rd, 6-3) will play their penultimate game of the elimination round as they face the Meralco Bolts on Friday, April 8 at the Smart-Araneta Coliseum. On the other hand, the Star Hotshots (9th, 4-6) will have a ten day break before facing the Mahindra Enforcers on Wednesday, April 13 in the same venue.

Second-half performance the difference as Ateneo surges past UST