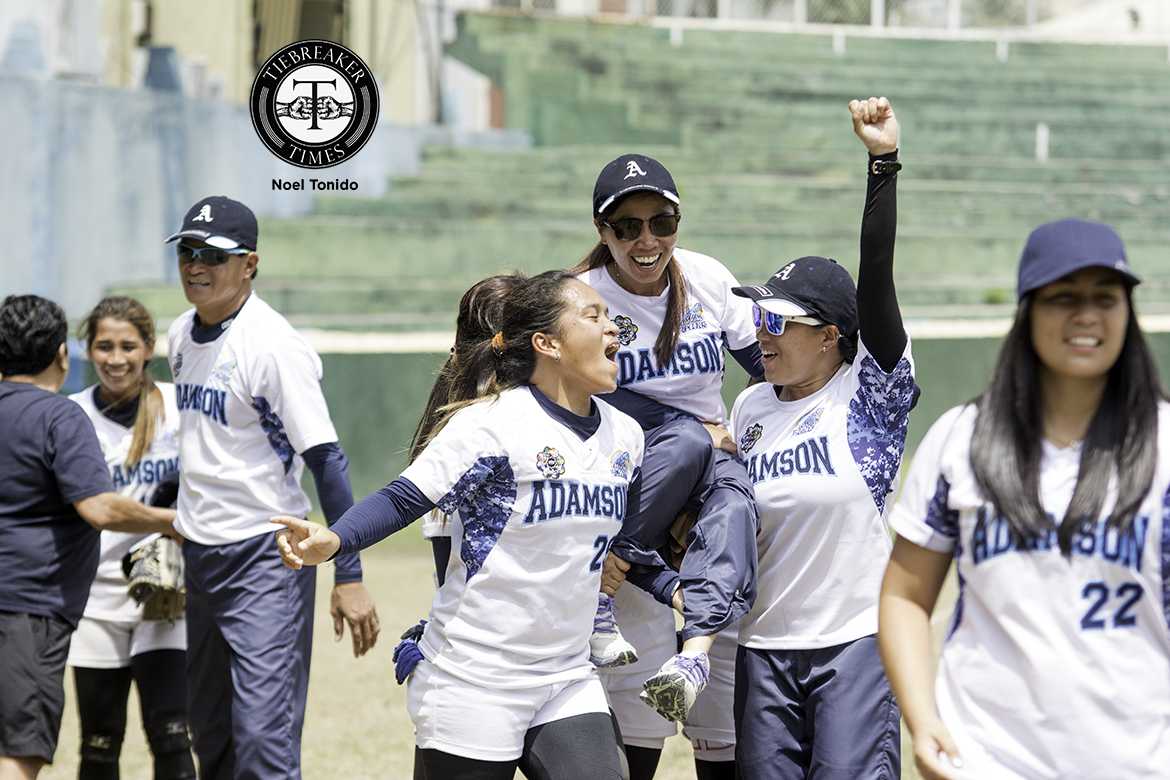 You may lose a battle, but you can still win the war.

Just as what they have done all-season long, the Adamson Soaring Lady Falcons carved out a win against the University of Santo Tomas Tiger Softbelles, 5-3, to snare their sixth consecutive title and their 15th overall, Friday afternoon at the historic Rizal Memorial Baseball Stadium.

The Thomasinas scored the breakthrough run of the game at the very first inning. Hannah Dela Torre sent a fly ball to Adamson left fielder Riflayca Basa, who could not gather the ball. Basa bounced back in the succeeding at-bat as she collected the Kristine Lacupa attempt for the first out. Celestine Palma and CJ Roa then loaded the bases for Mallows Garde, who reached their respective bases with a double and an intentional walk respectively. Dela Torre scored with Garde at bat; however, Palma was tagged out at third and Garde was beaten off the throw to first baseman Riezel Calumbres for a fantastic double play to hold all the runners.

UST doubled their lead in their side of the third inning. Lead-off batter Arlyn Areglado drove in a ground-rule double to the right field to jump start the offense. Dela Torre then put Areglado into a scoring position at third base with a sacrifice bunt. Lacupa did not waste the opportunity and she sent her designated player Areglado back home. Fourth-year center fielder Lorna Adorable would have enough of that and composedly collected the next two hits off Palma and Roa.

That rally turned out to be the last hurrah of the Tigresses as the Lady Falcons took over the game. After graduating Krisna Paguican and Calumbres grounded out to the infield, Adorable struck a well-placed single to the shortstop–second baseman gap for the team’s second hit of the game. Season Most Valuable Player Queeny Sabobo then delivered when it needed. After taking a low-outside first pitch off Garde, the back-to-back Homerun Queen fired a cannonball off the right field fence for a homerun and took Adorable with her for the tying run.

Garde, who started on the mound for UST, was then recalled to the dugout as ace pitcher Ann Antolihao was sent in on her stead to try and stop the impending Adamson two-out rally. However, the third-year pitcher hit Gelyn Lamata on her very first pitch. With a runner on base once more, Best Pitcher Annalie Benjamen then punished another low ball, sent it to the left field this time for another 2-RBI homerun, and took the lead for the Lady Falcons at 4-2.

The reigning champions then consolidated the solid offensive fourth inning with impeccable defense at the top of the fifth. At that frame, UST only managed a single off Dela Torre as the other three outs were all easy dismissals.

At the bottom of the fifth inning, Adamson scored another run to pad the lead. Sabobo took the very first pitch and drove in another off-the-fence homerun to extend the lead at 5-3. The Tigresses than worked on their defense and stopped the Adamson attack.

Needing to score in their end of the 6th inning, Garde gained first base to start off the offense. With Oria on the plate, Benjamen threw off a wild pitch and advanced Garde to a scoring position at second base. Oria then took advantage of the opportunity and sent Garde to cut the deficit at one, 3-5. Nevertheless, after Jessie Belaño plucked another base hit, Sabobo then took the final out of the season as she gamely caught the Kristine Angeles fly ball.

With their defense holding off UST, it would be that same defense that was needed to click for the Lady Falcons to successfully clinch their sixth-straight title. And Adamson did not disappoint as Benjamen fanned Areglado for the first out. Dela Torre drove in another single, but two straight fly balls into the hands of Basa sealed the deal for the San Marcelino-based batters.

Graduating players Sabobo and Benjamen anchored the now-six straight champions Adamson on offense and on defense, respectively. The shortstop registered two homeruns and 3 RBIs after a sacrifice hit at her first at bat. The ace pitcher, on the other hand, gave up nine hits but limited them to 3 runs in a no-relief seven-inning stint. Both were also named the co-Finals MVP for the 78th season of the UAAP.