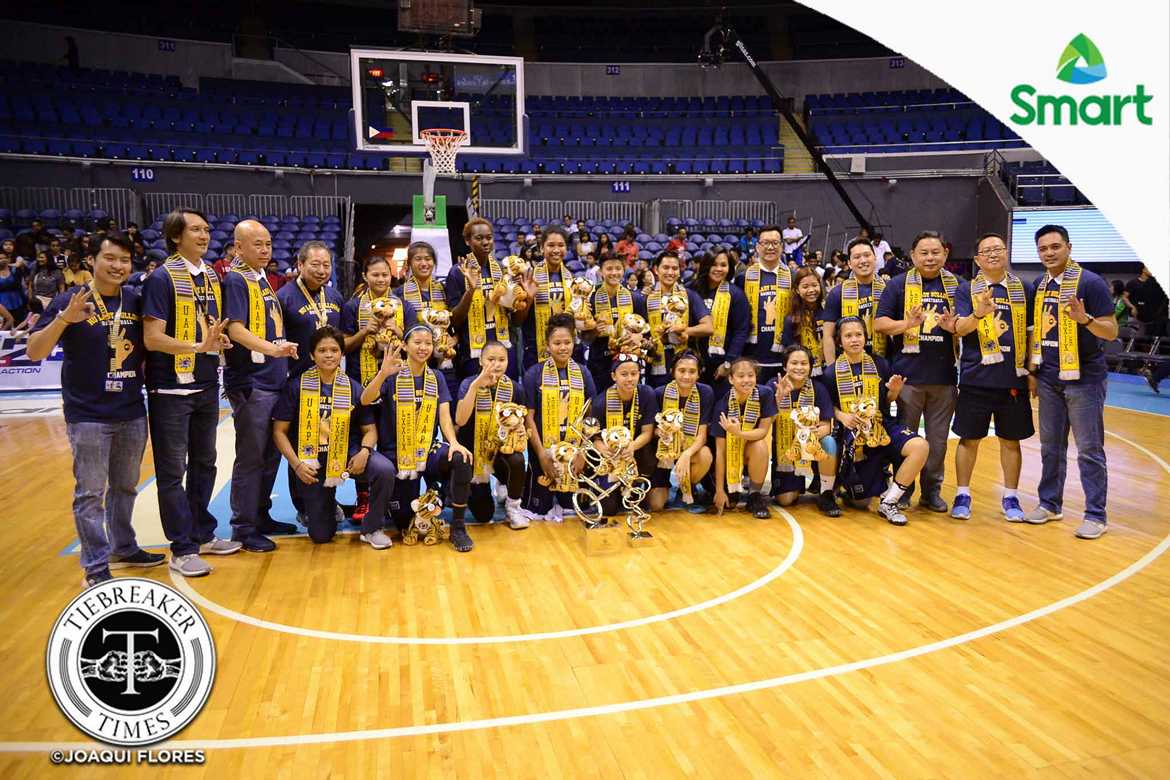 Undefeated and now champions once again!

For the third consecutive year, the National University Lady Bulldogs proved to be too strong, as they prevailed 96-72 against the De La Salle University Lady Archers today in the Smart Araneta Coliseum in Quezon City to seal the deal and win their third straight women’s basketball tiara.

This particular championship is sweet for the Pat Aquino-coached team, as they have successfully avenged their Season 76 predecessors against the Lady Archers. It is also the 48th straight game they’ve won.

“I just want to say thank God for everything that He has given us. To (Bernardino and Miranda) graduating, I am so proud of them,” commented Aquino.

Gemma Miranda was named Finals MVP and she produced 25 points and 13 rebounds in the game to up her series average to 24.0 points on 59 percent shooting, 14.0 rebounds, and 4.0 assists.

Afril Bernardino and Ria Nabalan made 18 and 15 points respectively. Jack Aminam also had a double-double with 16 points and 18 rebounds.

The champions started the contest with a point to prove after Game 1’s tight affair. Miranda ignited a 12-2 run with her trey to give the Lady Bulldogs a 26-15 cushion at the end of the first quarter.

That advantage was stretched late in the second quarter, when Rhena Itesi converted two free throws to provide NU a 49-28 edge from La Salle.

Once the game restarted, the Lady Bulldogs went for the kill. Nabalan extended NU’s dominance to 71-42 at the 4:06 mark in the third quarter. As NU closed the period with a 78-47 scoreline, the championship was as good as sealed.

It then became a case of inevitability for the Lady Bulldogs in the fourth quarter. Miranda scored underneath the rim to give NU their biggest lead of the ballgame at 90-50 with 5:58 to go.

In the end, NU scored their biggest win yet at 96-72 against La Salle to clinch their third straight championship.

Rebounds were key for NU, as they made 61 compared to La Salle’s 35. It led the Lady Bulldogs to make 56 interior points vs La Salle’s 44.

“Siguro ang approach namin is to play the best game na kailangan namin gawin. For example, Afril didn’t do well in the first game and it was Gemma carrying us all the way. Sabi ko if these two guys and the others like Jack Aminam and Rhena Itesi come out and play well, we’ll get the championship,” explained Aquino.