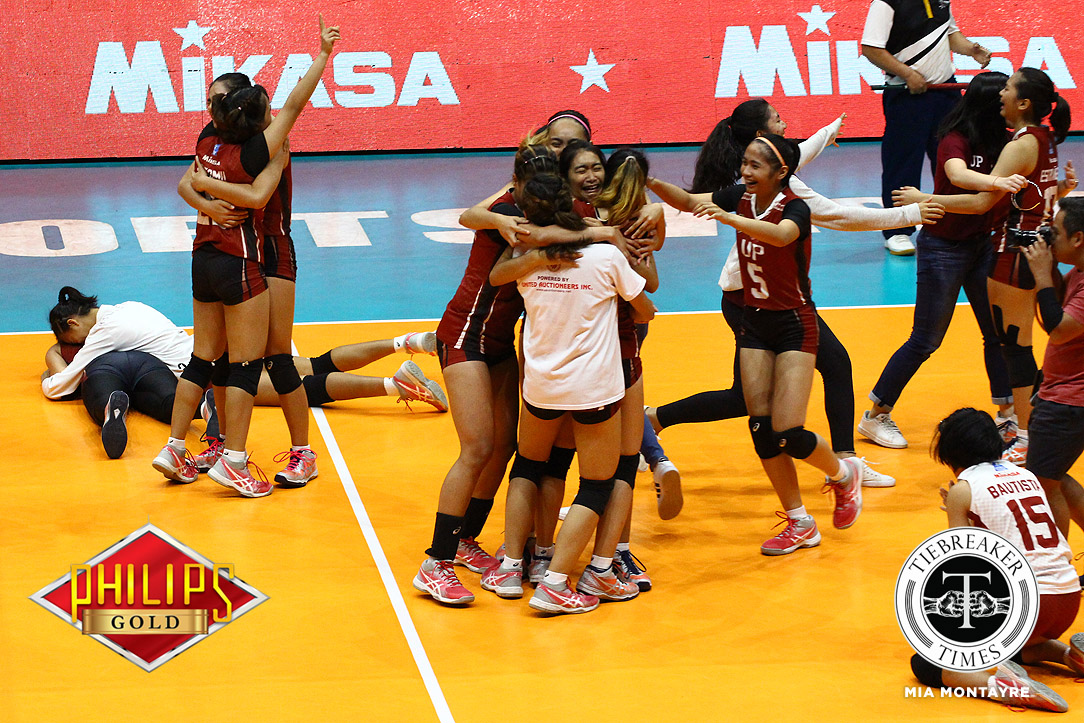 Though their young players had no emotional attachment, but the frenzied University of the Philippines crowd that gathered at the FilOil Flying V Centre knew exactly how momentous the moment was.

After suffering through injuries through the tournament, UP reached the pinnacle of their potential at the perfect time. The Diliman-based program also caught a break as FEU starter Celine Domingo – the tournament’s First Best Middle Blocker – was sidelined due to a lingering knee injury.

Both squads started the match trading spells of bad reception. Leading 14-12 in the opening frame, FEU suffered the most fatal and last slide, giving up eight of the next nine points. Freshly-minted MVP Isa Molde then ticked off two of UP’s last five points to take the first set.

The second frame was close until Molde again took charge. With UP trailing 14-15, the open hitter bombed the Lady Tamaraws from the service line, nailing two aces in a run that pushed them ahead, 20-15. The Lady Tamaraws tried to rally back, but their own errors and miscues propelled the UP to a 2-0 sets lead.

Deflated, FEU tried to rally in the third set by re-configuring their lineup, but only wound up in a 0-8 hole. UP looked primed to snatch the title, leading 13-5, before FEU setter Kyle Negrito sparked an 8-0 run off her vaunted target serving. That tightened the tension in the arena, as both teams dueled and exchanged hold of the advantage. The Lady Tamaraws broke their silence in the end, with Czarina Carandang powering a quick hit past two blockers for a 24-23 lead. UP’s Marsit Layug then clipped the following hit short, extending the match.

READ  What is it like to work with ONE CEO Chatri?

The fourth set dissolved into a trade of long rallies, in which FEU came out with a 22-20 lead. Negrito then pinned down Marian Buitre for three straight aces, dragging the match to a fifth frame.

FEU rolled to a 7-2 start in the fifth set, which they nursed into a 13-8 lead. But the Lady Maroons fought back, gutting out the next five points to knot the match. Isa Molde and Ayel Estrañero then completed the comeback, scoring UP’s last two points.

Before moving forward, Tab Baldwin asks Blue Eagles: ‘Who are we?’

Bo Perasol apologizes to Fighting Maroons for losing his cool