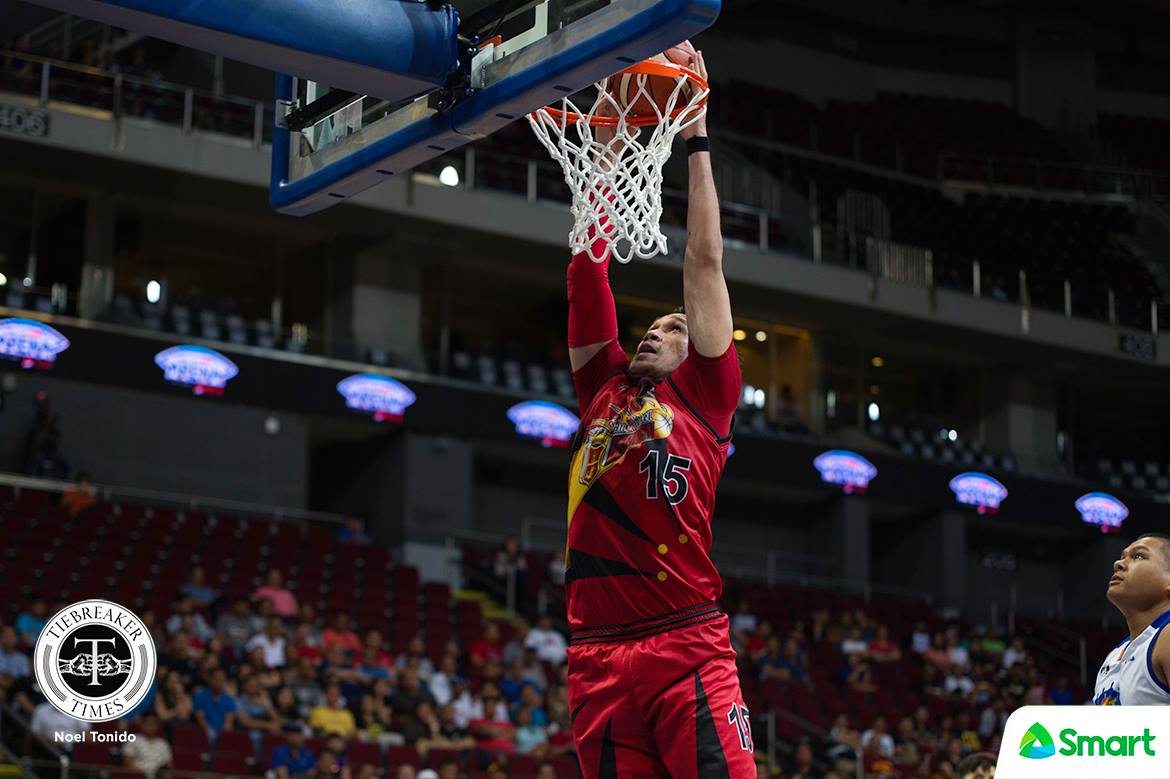 The San Miguel Beermen took full advantage of their win-once playoff incentive, as they took care of business and kicked out the TNT Katropa, 106-93, Tuesday evening at the SM Mall of Asia Arena in Pasay City.

The reigning three-time Philippine Cup champions are now headed to the semifinals, and will wait for the winner of the Barangay Ginebra San Miguel–Rain or Shine Elasto Painters series for their next opponent. The Gin Kings are up 1-0.

“First of all I want to praise God. I never had sleep last night because of my wife. She undergone a kidney transplant but thank you Lord, very successful operation for her, and I know she’s watching right now,” said an emotional coach Leo Austria.

“Talagang nagpapasalamat ako dahil ngayon, this is the hardest game we ever had against Talk N Text dahil they’ve been in two knockout games, and then lahat tinambakan nila, and I’m really worried about this game,” the reigning coach of the year admitted.

Reigning Most Valuable Player and Best Player of the Conference frontrunner June Mar Fajardo asserted himself in the win, going full Kraken mode with 35 big points — 22 in the first half — on 15-of-19 shooting alongside 11 rebounds and two blocks.

“I have to give credit to the boys, especially to June Mar Fajardo. He was so focused in this game,” said Austria of Fajardo.

The Beermen, mainly behind Fajardo, got the early lead over the Katropa, and were able to post a 26-16 advantage with over three minutes to go in the opening frame. Their cushion even ballooned to 12, 42-30, in the second chapter.

But the Texters fought back in the third canto thanks to the exploits of RR Pogoy. From a 57-64 deficit early in the said quarter, TNT made nine straight points to snatch the lead, 66-64, with 5:37 on the clock.

A tight battle ensued afterwards. San Miguel had a 79-74 edge with nine minutes in the final frame, but Jayson Castro and Tony Semerad’s baskets tied it at 79-all with 7:42 remaining in the match.

That proved to be TNT’s last hurrah, however. Brian Heruela broke the deadlock with a trey, and SMB had the upper hand and never gave it up. Their 6-0 run sent them to a 100-90 lead with 1:23 left to play and sealed it.

“I want to thank the players for this win,” added Austria.

Marcio Lassiter had 20 points for San Miguel. Arwind Santos, who was ejected for a technical foul after a tussle with TNT’s Jericho Cruz late, finished with 15 markers, seven rebounds, four assists, four steals, and four blocks.

Castro had 19 points and eight assists to pace the Katropa. Troy Rosario had 19 markers as well along with seven boards; Pogoy finished with 17 points; while Semerad and Kelly Williams poured in 16 and 15 points, respectively.