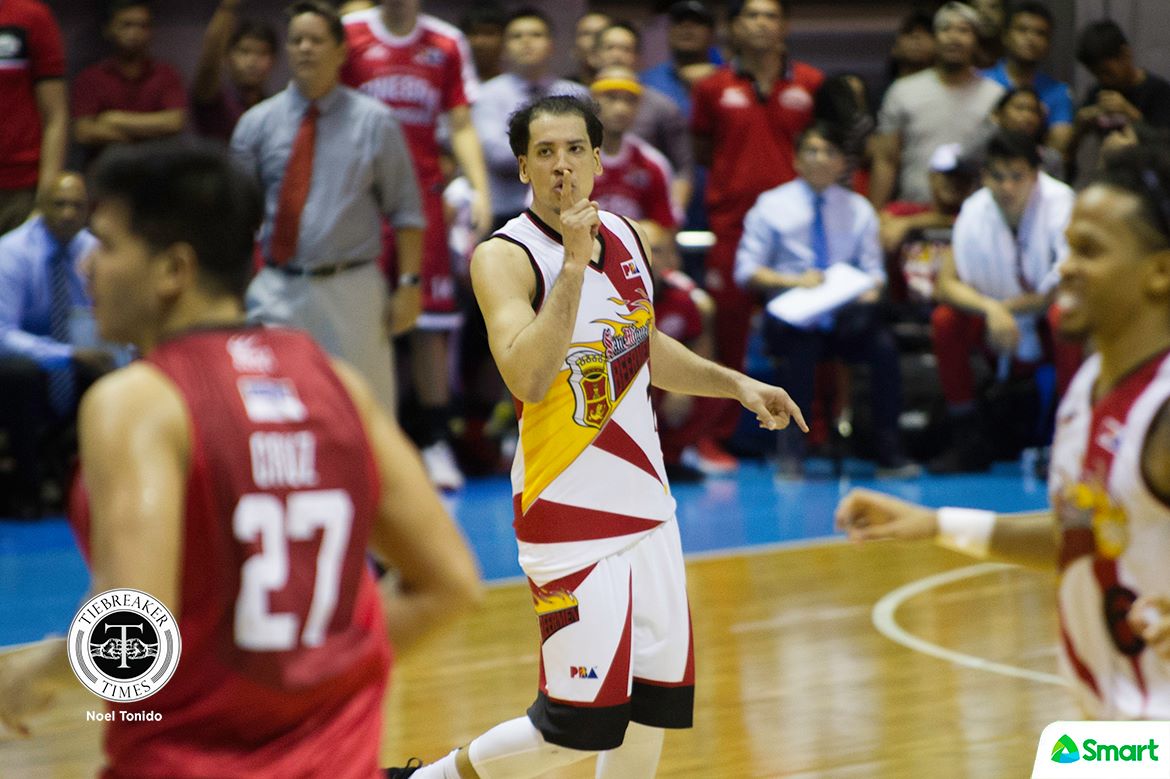 The sharpshooting guard made the game-winning bucket all over the Barangay’s defense with 3.2 ticks left, when teammate June Mar Fajardo’s lay-up off a pick-and-roll — the play initially designed to ice the bout — missed.

“He executed it well, si June Mar na-miss niya ang lay-up but the presence of mind ni Marcio is always there, na-put back niya. That’s why I say it is tsamba, but tsamba man o ano, tatanggapin ko ng maluwag dahil a win is a win,” the reigning Coach of the Year added.

The Beermen are now up 2-0 in their 2018 Philippine Cup semifinal series, and have the opportunity to take a commanding 3-0 lead in Game Three on Tuesday, March 13, at the SM Mall of Asia Arena in Pasay.

The Beermen were actually expected to go home with an L, when the Barangay dictated the tempo early on and led by as much as 15, 53-38, late in the second quarter. But then the defending All-Filipino champs made a stand.

San Miguel trimmed down the lead gradually in the second half thanks mainly to their starters, and all of a sudden, Ginebra’s lead turned to just three, 93-90, after Santos’ huge trey with 1:54 left in the fourth chapter.

Joe Devance made a putback moments later to widen Ginebra’s lead, but Fajardo’s perfect charities and another three-pointer courtesy of Santos made it 95-all with 13.4 seconds left, setting the stage for an extra period.

The Gin Kings had the upper hand in OT and led by four, 102-98, after Devance’s trey with just 1:01 to go, but the Beermen found a hero in Lassiter as he scored San Miguel’s last six points — including the tip-in — to steer his team to the victory.

“My players, ayaw nila magpatalo kaya salute ako sa kanila. I’m sorry for my players dahil extended ang minutes nila unlike in the first game,” shared Austria. “Pero this game is very important. Kung gusto nila magpahinga tomorrow pwede pa magpahinga. 36 hours before the next game I think that will be enough rest for them. We will take our usual viewing to see what kind of adjustment ang ginawa nila since it’s effective eh.

“Ang mga players, wala akong masabi sa kanila. Talagang they played with a lot of heart, maybe because they are used to this kind of situation,” continued Austria.

Ginebra’s loss wasted the career-best outing of unheralded big man Prince Caperal, as he poured in 26 points — 22 in three quarters — along with eight boards and three assists. Japeth Aguilar led the Barangay with 28 points.

Scottie Thompson had 10 points, nine boards, five dimes, and four steals for the Gin Kings, who only had an eight-man rotation. Jervy Cruz had 10 as well, and six caroms.