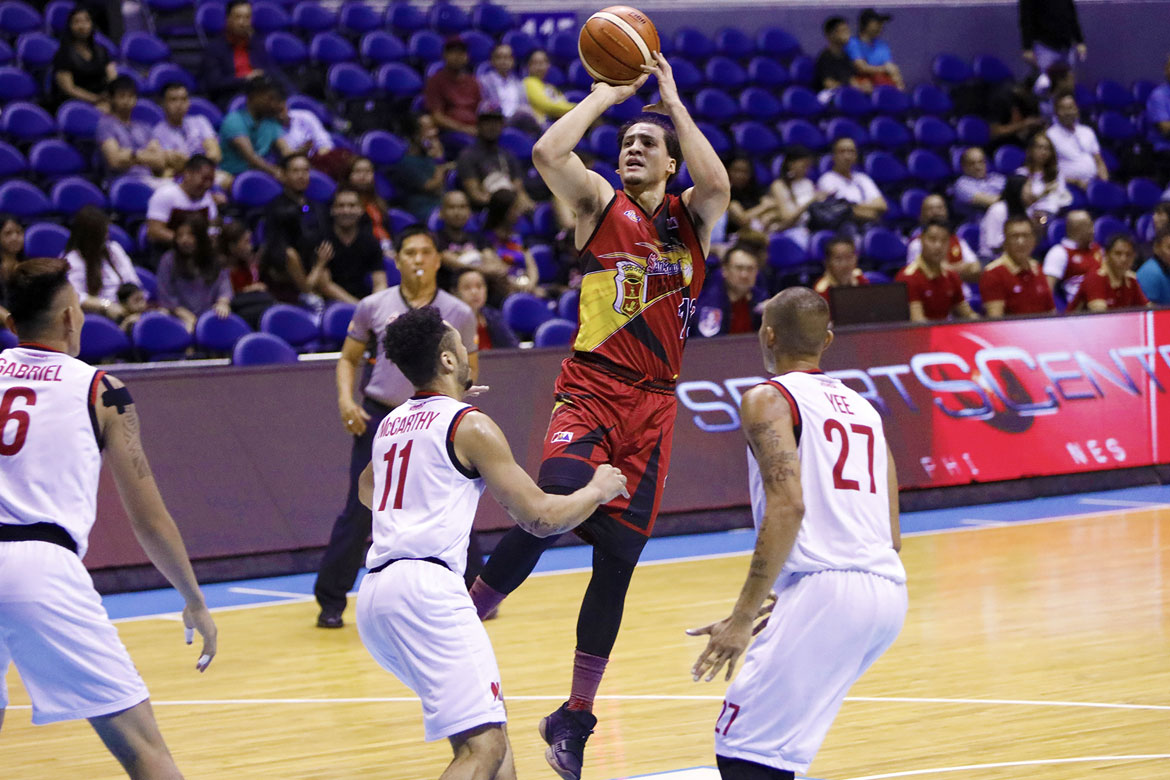 Marcio Lassiter nailed the underbasket stab off Chris Ross’ inbound pass with 1.8 ticks left to save the San Miguel Beermen from humiliation at the hands of the Kia Picanto, 108-106, Friday evening at the SMART Araneta Coliseum.

Lassiter’s game-winner put into waste the gallant stand Picanto made in the payoff period, where they battled from 18 points down by pulling off a scintillating 24-3 blitz to take a 106-103 lead with 1:03 left in the game.

“That play is a creation between Marcio and Chris,” said San Miguel head coach Leo Austria. “That’s an option they’ve got, which is yung basketball sense nila eh nangyari. If it did not happen, there’s another option.

“[Pero] Kung hindi nangyari yun, kung hindi nag-three points, and then nag-miss, natalo kami, it could be a disaster for us and it’s not a good sign going to the playoffs,” added the reigning three-time Coach of the Year.

The Beermen have improved to 8-3 and have made a strong case of bagging a twice-to-beat edge for the 2017-18 Philippine Cup playoffs. The Picanto, meanwhile, will be exiting the all-Filipino tilt with a disappointing 1-10 card.

Lassiter finished with 22 points on 7-of-17 shooting with four rebounds, three assists, and two steals, while Ross nearly had a double-double of nine markers and 10 feeds. He also had three caroms and two steals to his name.

The Beermen had actually seized control as early as the second frame, when they made nine straight points en route to a 38-25 lead. From there, the Picanto found it hard to find rebuttals, and SMB feasted on offense easily.

#ReadMore  Is momentum now on SMB's side? Austria believes otherwise

San Miguel, however, was just too much as they have shown championship composure. Lassiter knocked down a corner triple with 47 seconds to go to tie it up, and that had spelled doom for the upset-hungry Picanto.

Kia had chances, especially Khobuntin, but his pull-up jumper off an isolation play got blocked by Arwind Santos. That then proved to be the beginning of the end for Picanto as Lassiter nailed the game-winner seconds later.

Santos top-billed for the June Mar Fajardo-less an Miguel with 27 points on 12-of-20 shooting from the field along with 12 rebounds, five assists, and two blocks. Von Pessumal and Yancy De Ocampo scored 11 and 10, respectively.

Glenn Khobuntin, who had a hand in Kia’s fourth quarter rally, had 15 points — 11 in the final frame — and five dimes to lead the Picanto. Jackson Corpuz, who left the game with 9:46 to go due to a sprained ankle, had 12 points and seven rebounds.

San Miguel will look to clinch a twice-to-beat edge again Rain or Shine on Wednesday, February 28, 7:00 PM at the Mall of Asia Arena.