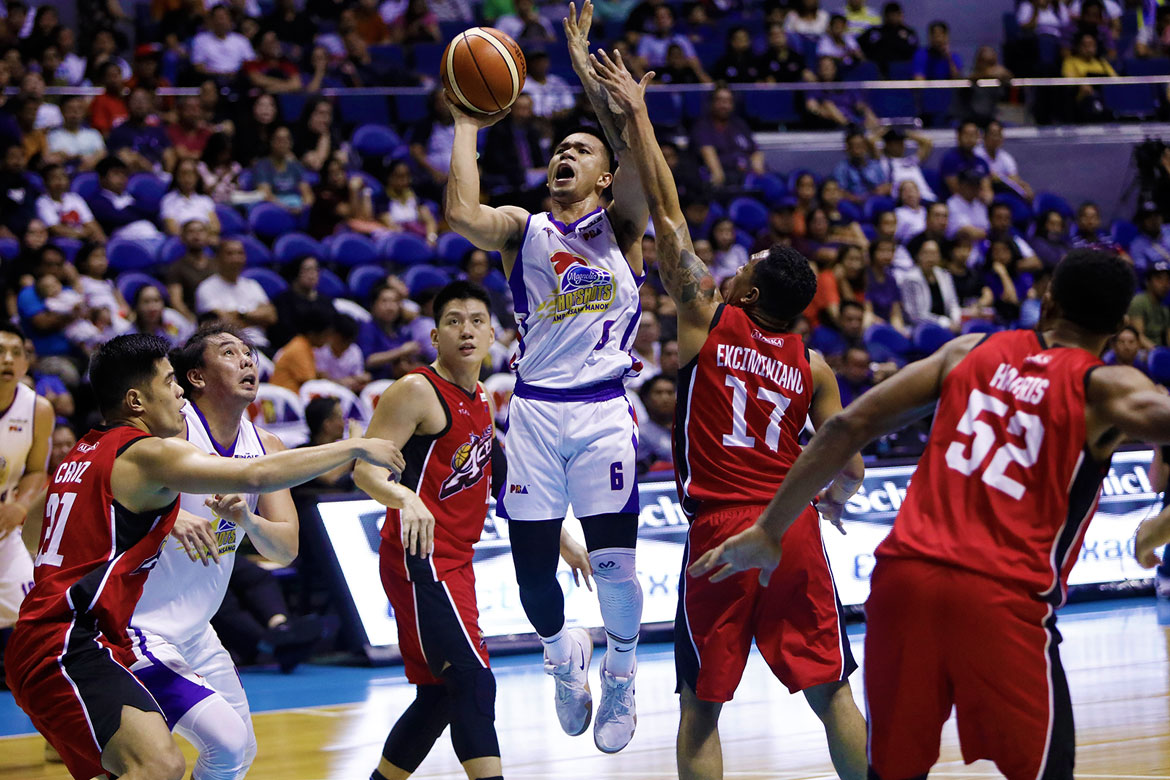 Jio Jalalon came through in the clutch to help the Magnolia Hotshots sneak past a pesky Alaska Aces, 77-71, for a 2-0 lead in their 2018 PBA Governors’ Cup Finals best-of-seven series, Friday night at a packed SMART Araneta Coliseum.

Jalalon first sank a contested leaner off the glass with 2:41 remaining in the game. He then coolly sank a pair of freebies with 15.9 seconds left to help Magnolia complete their comeback from nine points down early in the third canto.

The sophomore guard finished with seven points, seven rebounds, and seven assists, along with three steals.

Romeo Travis set the pace for the Hotshots with a game-high 24 points, nine rebounds, three assists and four steals. Slotman Ian Sangalang supplied 11 markers on 5-of-7 shooting along with five rebounds coming off the bench.

Unlike in Game One  where they coasted from start to finish en route to the 100-84 victory, Magnolia had to fight tooth-and-nail against a gritty Alaska this time around. Additionally, the Aces had the upper hand the majority of the game – they led by nine twice in the third.

But the Hotshots’ maturity showed, especially down the stretch. When the Aces snatched the lead, 71-70, with 4:55 remaining in the fourth quarter, Jalalon split his freebies 43 seconds later to send the game into a deadlock.

And when Magnolia could not execute on offense properly, Jalalon took matters into his own hands. He drove after a shot fake from the outside and made a tough leaning jumper off the glass to give his side the lead with 2:41 to go.

The Aces still had plenty of time on their side, but the Hotshots also turned it up on defense. Travis made a big steal off Simon Enciso’s inbound pass with 1:04 left, then Magnolia stopped Enciso’s lay-up off a drive with 18 ticks left.

Jalalon then calmly sank his free throws off a Chris Banchero foul with 15.9 seconds on the clock. Center Rafi Reavis settled the final score with a two-handed jam off a touchdown pass with four seconds left to play.

“We expected a dogfight today,” said winning head coach Chito Victolero. “In the first half, parang hindi kami makasabay sa kanila. We were a step late. I talked to them if we can’t match-up with them, we need to exert more effort.”

Magnolia will look to post a commanding 3-0 series lead on Game 3 this Sunday in Ynares Center, Antipolo.