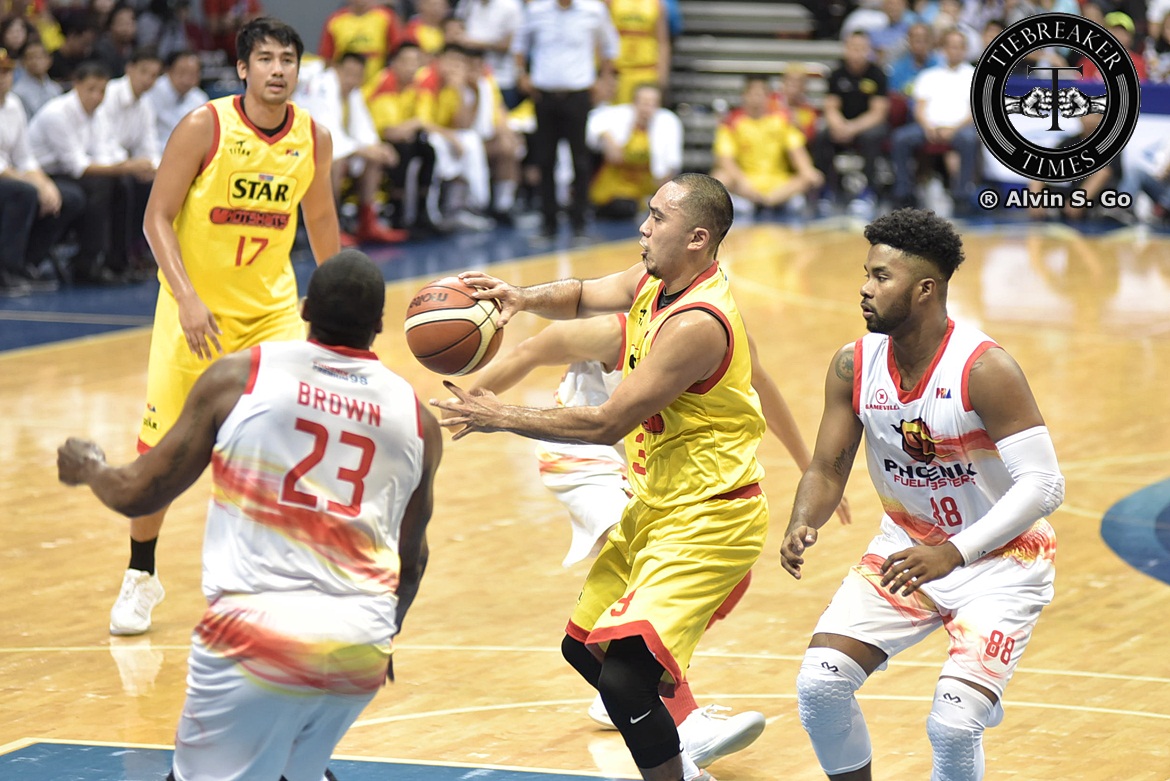 Even a lengthy 19-day break could not halt the Star Hotshots’ rhythm, as they extinguished the Phoenix Fuel Masters, 100-81, for their fourth win in a row, Wednesday night at the Mall of Asia Arena in Pasay City.

This marks the fifth meeting between the Hotshots (4-0) and the Fuel Masters (2-5) this season, with the former having won all of their duels. Star have won by an average margin of 25.5 points in their first four matches.

The Fuel Masters, meanwhile, dropped their fifth game in a row this conference, their longest losing skid in franchise history.

“It’s a total team effort. I’m very proud of my players for playing defense,” said Star head coach Chito Victolero. “We prepared hard for this game because we had a break for 19 days… Maganda yung mindset ng mga bata ngayon.”

Malcolm Hill led Star’s balanced attack with 20 points and eight rebounds. Paul Lee supplied 18 markers despite shooting just 5-of-14 from the floor — but he also had two rebounds, three assists, and three steals.

After close action in the first 24 minutes, the Hotshots pulled away wide in the third canto. An Aldrech Ramos basket lifted the men in gold to a favorable 17-point advantage, 70-53, with 4:42 remaining in the said quarter.

Star then sustained the lead all throughout, and was able to establish the game’s widest gap at 20, 95-75, after a Lee three-pointer with 4:21 left to play.

Forward Marc Pingris — who had spent five long months on the sidelines due to a hip injury — finally graced the court for the first time. He was checked in by Victolero with 2:38 left to play and stayed on the court until the end.

The Fuel Masters were anchored by replacement import Brandon Brown with 33 points and 23 rebounds. Jeff Chan, who suffered leg cramps with 5:54 in the third quarter, backed him up with 14 points on seven attempts.

Phoenix out-rebounded the winning side, 61-45. But they could not weather Star’s defense, as they committed 25 turnovers, which led to 17 points for the Hotshots. Star’s bench contributed 45 points to their total.

Star will look to make it five straight wins versus the Rain or Shine Elasto Painters on Sunday, August 27, 4:30 PM at the SMART-Araneta Coliseum. Phoenix, meanwhile, will face the Barangay Ginebra San Miguel next Wednesday, August 30, 7:00 PM, still at the MoA Arena.