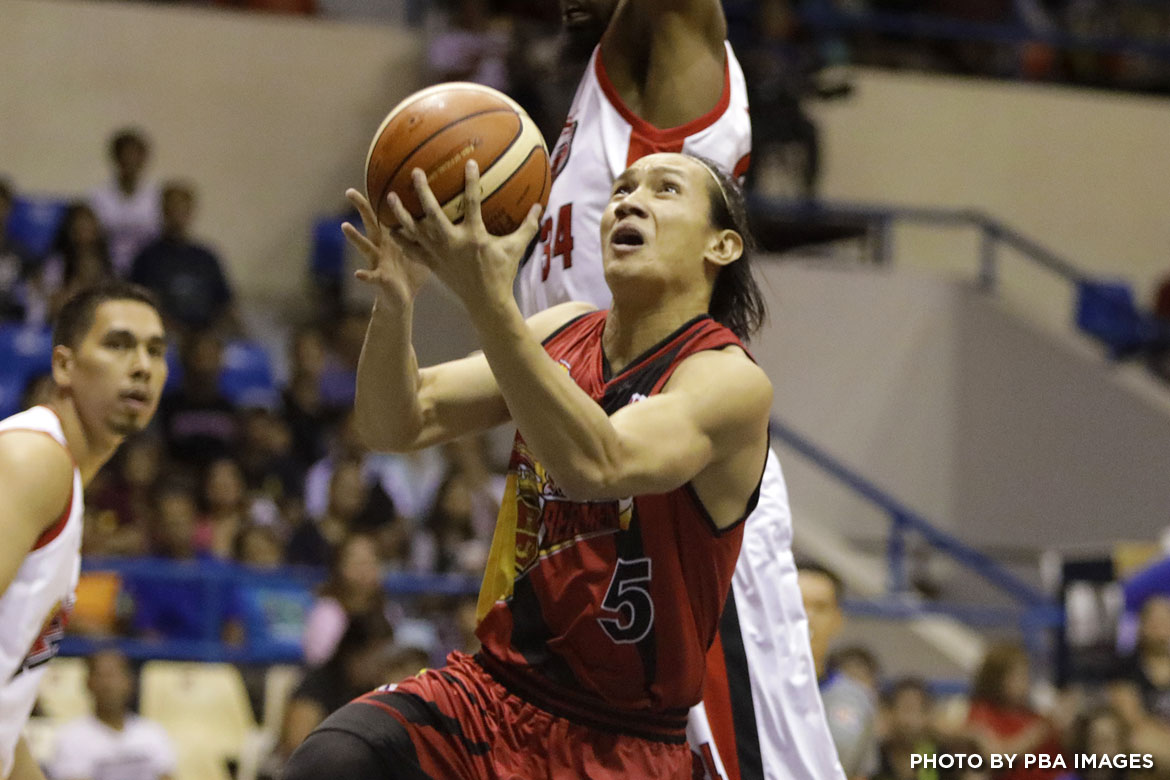 The chance to claim one of the the top two spots of the 2017 Commissioner’s Cup playoffs is now within reach for the San Miguel Beermen.

Coming off a loss to Barangay Ginebra last Sunday, the Beermen vented their frustrations to the disgruntled Alaska Aces, 109-97, to move closer to a twice-to-beat edge for the next round, Saturday night at the Ynares Center in Antipolo.

“We have to bounce back from that loss to Ginebra or else we might fall down to fourth or fifth spot. We don’t want that to happen,” said San Miguel head coach Leo Austria in the victory, which improves their card to 7-2.

Alex Cabagnot anchored SMB’s attack with 25 points on 50 percent shooting alongside 10 rebounds and six assists. Charles Rhodes also posted a double-double of his with 24 markers on 9-of-10 shooting and 10 boards.

From a slim 53-50 lead at the half, the Beermen pulled away in the third canto that left the Aces stunned. They even led by as much as 16, 84-68, after a right corner triple by Ronald Tubid to end the said period in their favor.

There was no looking back for San Miguel come the bout’s final 12 minutes, as they sustained the upper hand. The team had already passed the century mark, 101-79, after Rhodes’ perfect charities, still with 3:46 left to play.

Alaska tried to pull one last surge as they closed within a single digit, 106-97, after a mini run ended by Chris Banchero’s lay-up with 43 seconds to go, but time was not on their side anymore, as SMB went away with the 12-point win.

“This is a very important game for us. For us to get into the top two, we have to sweep our last two games, including Alaska,” added Austria regarding the triumph.

Marcio Lassiter chipped in 19 points for the Beermen, while Chris Ross produced 18 points and 10 assists.

The depleted Aces, who played without Calvin Abueva and Jvee Casio due to injuries, were led by Cory Jefferson with 23 points and 13 rebounds. Banchero proved to be his only back-up with 22 markers and eight dimes.

With the loss, Alaska is now 4-6 in the standings and tied with Globalport in the eighth spot.

SMB nailed 50 percent of their shots from the floor, with most of their shots coming from their 28 team feeds. They also won the rebounds, 52-41. However, Alaska had more support as their bench provided 52 points to their total output.

Both teams will play their next assignments on May 31, Wednesday, at the Cuneta Astrodome. The Beermen will take on Blackwater Elite at 4:15 PM, while the Aces will battle Star Hotshots at 7:00 PM.

No excuses for Compton, Alaska after sixth straight loss