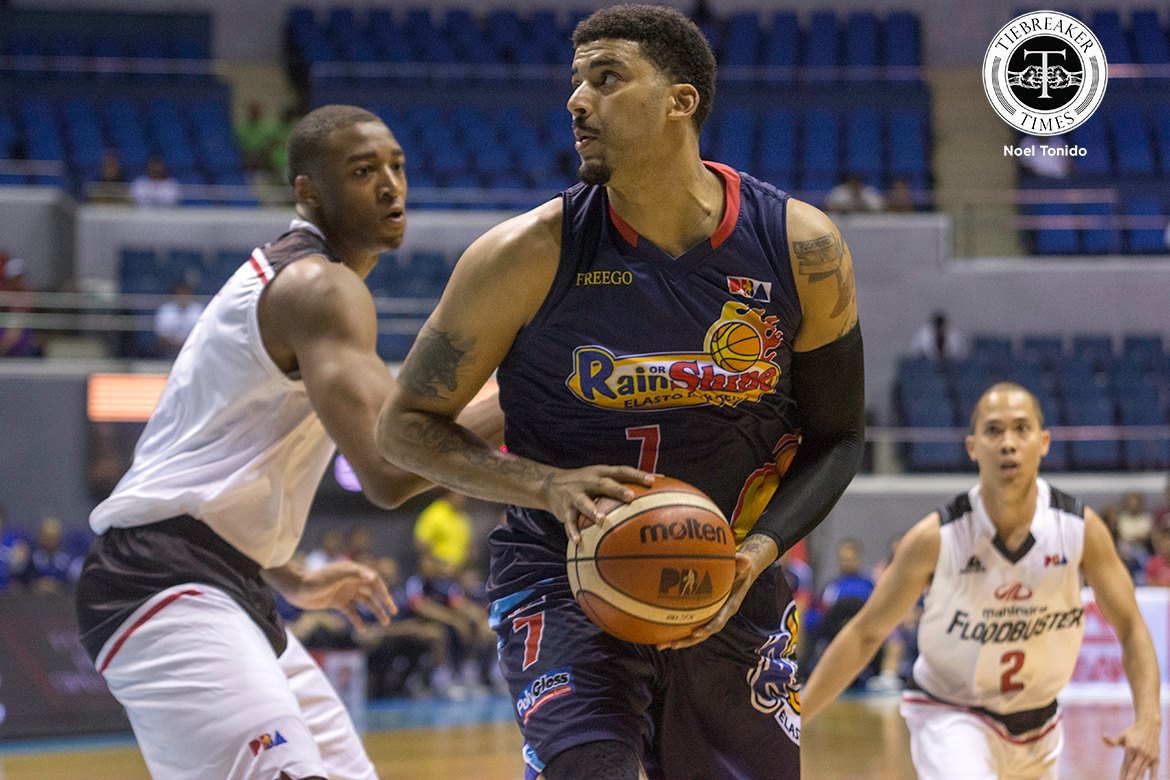 The Rain or Shine Elasto Painters had to survive a gutsy Mahindra Floodbuster and a Gary David explosion in extra period to reign victorious, 99-95, in the 2017 PBA Commissioner’s Cup, Sunday night at the SMART-Araneta Coliseum.

“After a good win against NLEX, maybe we went in this game relaxed. Good thing we had the win,” rued Rain or Shine head coach Caloy Garcia, who recently turned 42 years old. “It’s a good game. Both teams wanted to win.”

“I think that’s one of the things we have to experience. The chemistry ng matagal na kami magkasama is showing,” added Garcia regarding the win, which sends them to a 2-0 record.

Import Shawn Taggart logged in heavy minutes for Rain or Shine, playing 39 minutes and produced 29 points on 10-of-18 shooting, along with 10 rebounds for a double-double effort.

“With Shawn, he tries to get all the players involved. I told him we know you can score,” said Garcia of his import. “The thing I can say is that he makes everybody look good but minsan he paces on defense.”

However, Rain or Shine were able to get even at 88-all with 32.5 ticks to go, after an 8-2 run ended by a Shawn Taggart split. Mahindra had chances to snag the win, but James White’s potential game-winner clanged off the rim.

The Elasto Painters’ wits down the stretch were displayed in overtime. Mahindra went ahead, 93-90, but RoS fought back and scored seven straight points — highlighted by a Jeff Chan trey — to get ahead, 97-93, with 1:38 to go.

White once again willed Mahindra back to the game, 97-95, after a hook shot. But they could not get any closer, as a Taggart hook shot and several missed shots ended their hopes of completing their comeback attempt.

James Yap backed up Taggart with 12 points spiked by three triples, while Chan had 10 and seven rebounds.

White led Mahindra with 29 points and 21 rebounds in 44 minutes of action. David had 13, while Reden Celda and Bomg Galanza each chipped in 10.

Rain or Shine dominated the battle of the boards, 70-47. They also had more trips to the line, and shot 26-of-34 for a 76 percent clip. However, Mahindra kept pace from beyond-the-arc as they hit 13 triples.

The Elasto Painters will look to win their third straight win versus Blackwater next Sunday, March 26, 4:30 PM at the Ynares Center in Antipolo, while Mahindra will try to post their first win against NLEX this Friday, March 24, 4:15 PM still at the Big Dome.