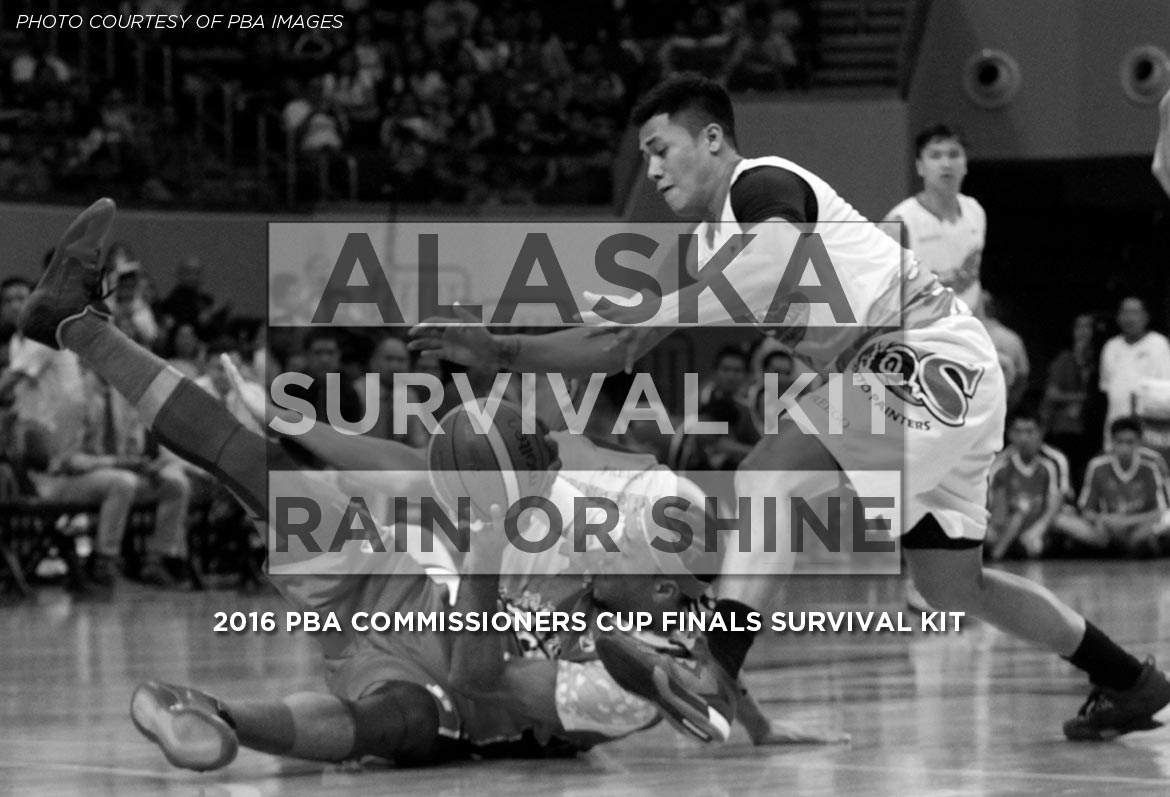 Behold, the PBA Commissioner’s Cup is down to the best-of-seven finals series, which shall pit the two hungriest teams in recent league history against each other.

Both the Alaska and Rain or Shine franchises have had a slew of runner-up setbacks over the past three seasons, and both are eager to finally end their respective championship droughts.

The Aces have been in three of the last four PBA conference finals, but succumbed in all three instances to the San Miguel Beermen, including a heartbreaking 2016 Philippine Cup series which saw the Aces have their 3-0 series lead evaporate at the hands of the history-making Beermen.

The Elasto Painters, on the other hand, have been in nine straight semi-finals appearances, making it to three championship stints in that stretch (excluding the upcoming finals). But they failed to bag a PBA crown in all three attempts. Two of those series went the distance, including a seven-game affair the squad lost to the Tropang TNT in last season’s Commissioner’s Cup.

That the likes of San Miguel and TNT are not even in the championship conversation this time speaks of how consistent Alaska and Rain or Shine have been; both teams rank above league average (and are neck and neck) in several statistical categories including offensive rating, defensive rating, net rating, and three-point shooting.

The Aces have not won a championship since 2013, when a familiar face in Rob Dozier carried them to the top of that season’s Commissioner’s Cup. The Elasto Painters’ only franchise title came in 2012 and a lot has changed in the team’s DNA after that.

All those storylines add up to what is expected to be grueling and exciting showdown between two squads out to give this conference finals a brand new look. For basketball observers, it will be a delightful sight to finally see one of them end championship futility, and the quest starts on Friday.

The Case for Alaska

Despite not having Vic Manuel during Game 3 of the quarterfinals, the Aces took down a full-strength Tropang TNT before edging the Meralco Bolts in a tough five-game series.

Chris Banchero and RJ Jazul have filled in extremely well for the injured JVee Casio. Rob Dozier is clearly the better import when it comes to production. Calvin Abueva is playing smart basketball and he could be a match-up problem for Rain or Shine if he continues to showcase the type of leadership he’s shown in the semi-finals.

Although incomplete, the Aces are still loaded and have what it takes to fend off every blow from the Elasto Painters.

The Case for Rain or Shine

This is arguably the best Rain or Shine team we’ve seen in years. The team is stacked from top to bottom.

They have a big man in Pierre Henderson-Niles to patrol the shaded area. JR Quinahan is in the best form of his career; Jeff Chan is shooting at a career-high rate; Paul Lee has been blending well and is slowly regaining his top form. The Elasto Painters have youngsters who play like veterans. The frontcourt, wing, and backcourt rotations are all loaded.

The squad is complete, and their depth showed as they eliminated the Barangay Ginebra and San Miguel. In the end, that depth may spell the difference between finally winning a championship or ending up being a mere statistic in another team’s championship run.

With Casio injured, Jazul saw his minutes increase from 24.9 in the eliminations to close to 30 in the play-offs. He has played 30 or more minutes in three games. This series is the biggest challenge of his career. Playing second fiddle to Casio for most of his stay with the Aces, he is now poised to be the starting point guard for his squad. He has to facilitate well and be on target on offense so the gap in the backcourt will not trouble the Aces.

Abueva averaged 17 PPG and 7 RPG in the semifinals, showcasing great leadership alongside filling the stat sheets. When Abueva makes sound decisions on the floor; that’s when he is at his best. If that version shows up again in the finals, the Rain or Shine defense will have to work extremely hard to limit his impact.

Banchero tallied 11.6 PPG, 3.2 RPG, and 2.4 APG in the semifinals, also fulfllilling a bigger role with the absence of Casio. With Casio still doubtful to see action in the finals, Banchero should continue to be aggressive and provide fine quarter-backing for his squad.

Quinahan has been the Elasto Painters’ most consistent player in the conference. He leads all locals with 13.5 PPG, shooting 51.9 percent from the field and 37.7 percent from long distance. He stretches the floor effectively for Rain or Shine, and that opens opportunities for his other teammates to score. He needs to do more of the same in the finals to give the Alaska defense a problem.

Chan’s numbers dipped from 18.5 PPG in the quarter-finals to only 9.5 PPG in the semifinals. In addition, he shot only 26.1 percent from three-point area against San Miguel from a previous 42.9 percent against Barangay Ginebra. With three-point proficiency being one of Rain or Shine’s best weapons, Chan should show his deadly form in the finals.

Lee averaged 16.5 PPG in his last two games for the Elasto Painters, showing more progress with his game. If Lee goes on to show more of his aggressive, attack-the-basket game in the finals, then Rain or Shine will have more points of attack, making the team an even more dangerous unit.

Dondon Hontiveros and Cyrus Baguio have been struggling this conference. Hontiveros only norms 3.6 PPG on 32 percent shooting from three-point area, while Baguio has numbers of 6.9 PPG on 23 percent shooting from the same region. A better version of the tandem should show up in the finals, because Alaska cannot lean on just Dozier or Abueva or the backcourt to get the job done.

Although the Elasto Painters lean on their three-point shooting and up-tempo pace, their bigs should also be involved for a more balanced and unpredictable attack. With Vic Manuel questionable to play in the first portion of the series, Rain or Shine’s frontliners should keep attacking Alaska’s frontcourt on both ends.

This conference is theirs to lose. If they won’t win it now, then they’ll have to restart again. They’re tired of just “winning” second place, and they have a big opportunity to end the spell in this conference. They are stacked. They have all the weapons they need to win a championship trophy. A full-strength Rain or Shine crew is pretty much capable of finishing the job.