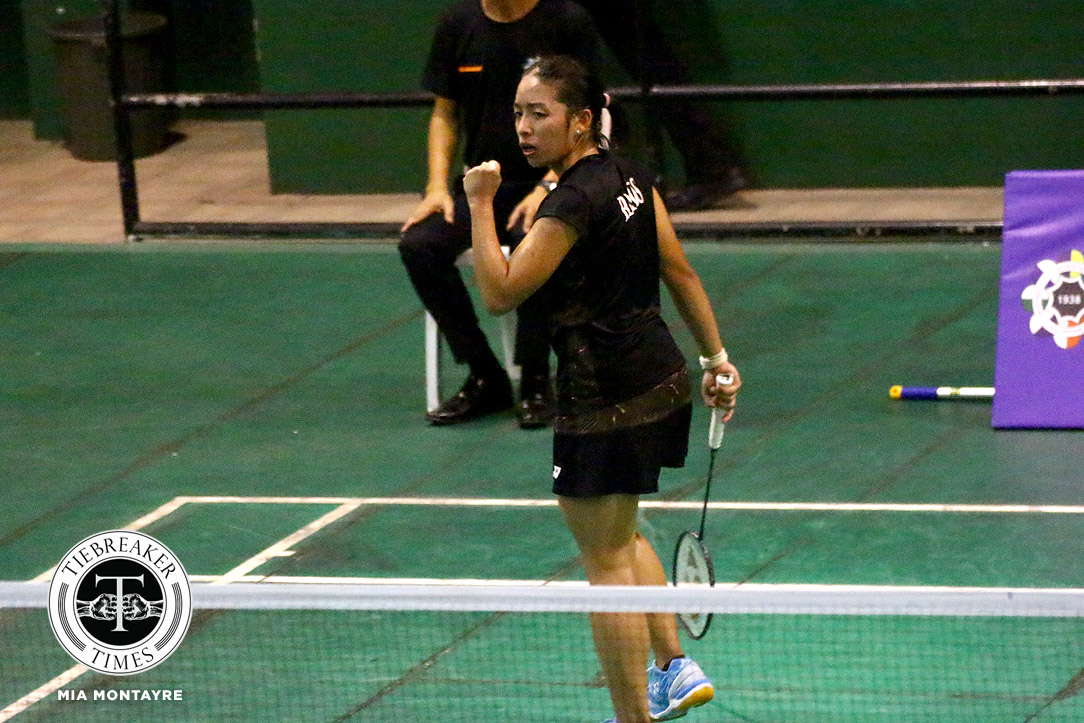 Still charged from their most recent win against the Lady Bulldogs themselves, it only took a matter of proper mindset for the Loyola Heights ladies to do what they do best – rise up from the bottom.

There were changes across the board for both sides, but the match-up went in Ateneo’s favor in the end.

Chanelle Lunod set the tone for what could be considered an upset, as she toppled national athlete Thea Pomar in the first singles match. The former Rookie of the Year from the Ateneo had crawl back from early to mid-game deficits to snag the victories at 24-22, 21-19.

The first game was a see-saw battle that  saw exchange of leads from either side. Pomar was at game point at 21-22, but Lunod clinched the next three points as the former suffered consecutive errors on the return. Afterwards, the Ateneo junior overhauled a 7-11 deficit to clinch match point at 20-17, before fending off Pomar’s late challenge to eventually take it at 21-19.

Sarah Barredo, the country’s top singles player, took one for the Bustillos-based side after dominating the gritty challenge of Geva De Vera. The fourth-year Ateneo stalwart kept it close in the first at 10-13 before Barredo pulled away in the first game. The NU rookie was then unstoppable in the second and clinched it at 21-7.

Jiselle Capillo and Jeya Pinlac took a measure of revenge against Ramos and Bea Felizardo, after the loss in the previous semis match-up in the first doubles match. This time, the Lady Bulldogs were dominant in the pace-setting 21-8, 21-15 win. The second set was a toss-up as the teams were knotted at 10, but with National U taking the lead at the interval at 11-10 and pushing it to 16-10 advantage, it was decided from there.

Nonetheless, De Vera and Lunod were all-business and the result was a repeat of their win over Pomar and Barredo.

Succumbing once more to errors, the NU duo could not create a proper counter to the onslaught of their Ateneo opponents. The second set went to the Blue and White ending the match at 21-13, 21-19.

Despite the score line in the second game, the second doubles match took 43 minutes to finish – enough time for Ramos to regain his composure and look forward to the deciding singles match with a plan in mind.

“Like what is said, mindset is very important,” the fourth-year player said. “The thing that topped my mind [after that singles loss] kasi nga siya ulit kalaban is to bounce back. I just have to think of the positives, and move forward from the negatives.”

This outlook pulled her through despite absorbing a sorry 20-22 setback in the first game. The Lady Eagle knew that – despite some mini-runs made by Capillo – she was in control of the match. And with her more focused take on the game, the points slowly poured in. Ramos eventually dominated the match in the next two frames at 21-14, 21-13 to extend Ateneo’s run back to the Finals.

With a tougher battle ahead, Ramos and the rest of the Lady Eagles just needed to carry on. “I can’t say for sure, but we’ll just keep the same mindset.”

The Ateneo-University of the Philippines showdown for the title starts on Wednesday, October 11, at 1 pm.