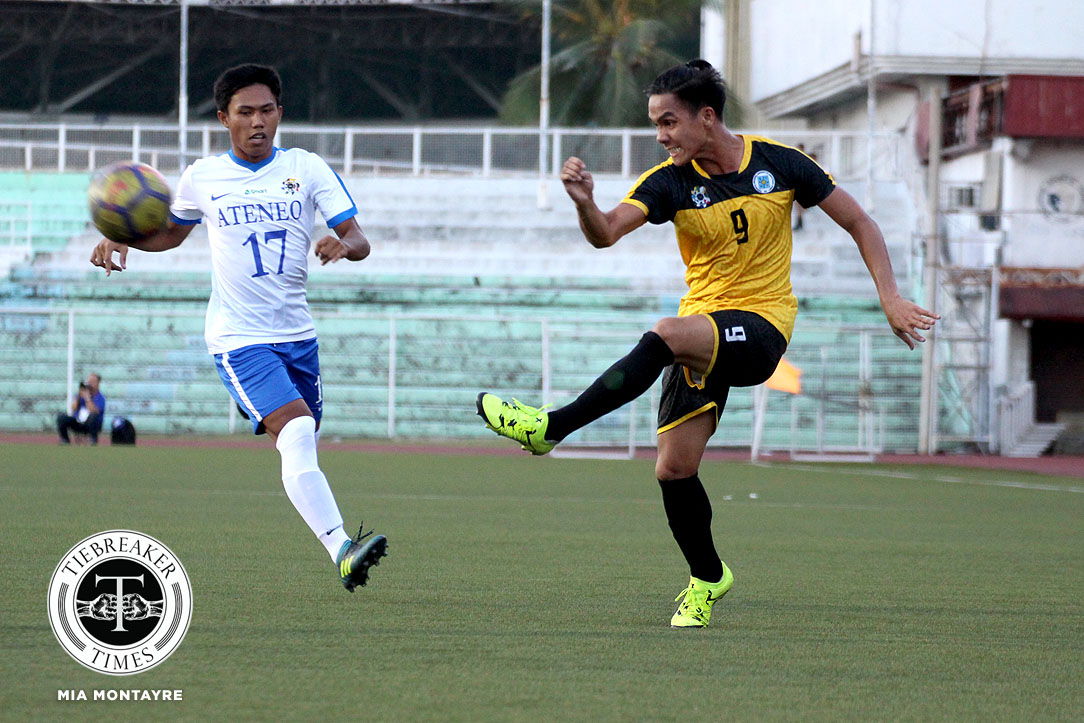 If you want to be the champions, then you have to beat the defending champions, and the University of Santo Tomas did just that.

The Golden Booters showed that they are title contenders with a 1-0 victory over the Ateneo de Manila University Blue Eagles, Sunday afternoon at the historic Rizal Memorial Stadium in Manila.

As one would expect from two of this year’s championship favourites, attacking football was on show as soon as referee Oliver Moreno blew his whistle. UST and Ateneo should have broken the deadlock in the opening period, but luck and skill prevented that from happening.

UST midfielder Renz Gumban should have given the lead to the Golden Booters as he eluded the Blue Eagles defense and chipped the ball past goalkeeper Jae Arcilla, only for the ball to be denied by the post.

Shortly after at the other end, Ateneo captain Julian Roxas won a free kick in a dangerous position in the UST half. Jarvey Gayoso stepped up to strike the static ball and his attempt would have been a certain goal if not for a good save from Golden Booters goalkeeper Zaldy Abraham, Jr.

Come the second half, it was the Golden Booters who showed more aggression. UST should have drawn first blood minutes after the game’s resumption when substitute striker Steven Anotado broke through the Blue Eagles defense, but Arcilla was there to salvage the situation.

READ  George Pascua on seemingly choking himself: 'Out of nowhere yun'

In contrast, the Blue Eagles made a lot of uncharacteristic mistakes. Ateneo players kept missing their passes, which in turn allowed their UST counterparts to bombard the Blue and White’s half. One of their rare chances in the period saw Roxas direct his free kick wide.

Roxas’ miss summed up Ateneo in the second half, and things worsened moments after. Anotado made up for his earlier miss with a goal in the 76th minute. The veteran striker converted AJ Pasion’s through ball to give the España school the due reward for its efforts.

Ateneo had no response after Anotado’s goal. Gayoso had a chance in stoppage time, but his shot went well over the Golden Booters’ goal. Ultimately, UST got their biggest win of the season yet with a 1-0 result at Ateneo’s expense.

Both schools shall next play on February 25 at the Far Eastern University-Diliman due to Global Cebu’s upcoming 2018 AFC Cup game. Ateneo will play the University of the East at 9:00 AM, while UST shall go up against the De La Salle University afterwards at 1:00 PM.