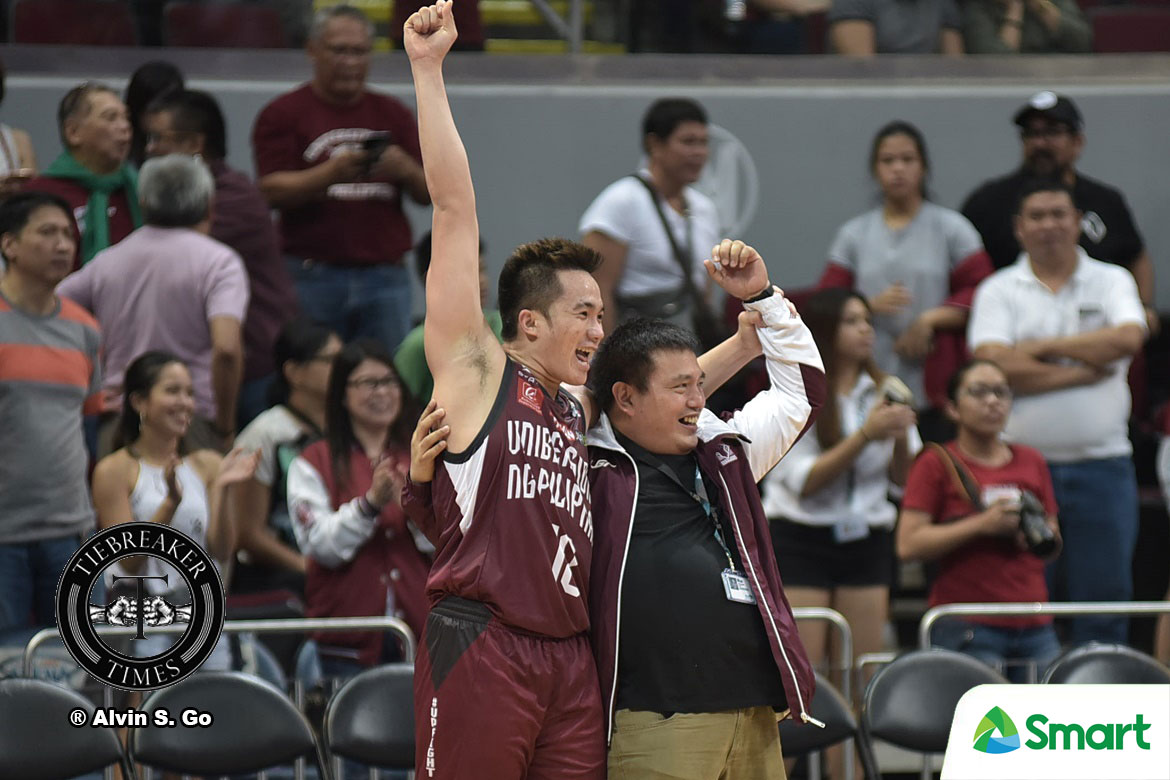 University of the Philippines survived an early De La Salle University Green Archers storm, unleashing a fury from downtown to take a 98-87 stunner, Saturday evening at the SM Mall of Asia Arena in Pasay City.

This is UP’s second straight win lifting their card to 3-1. Moreover, the Fighting Maroons handed the Green Archers its first loss, giving an assist to neighbors Ateneo Blue Eagles, who now top the standings.

“I may be a little bit shamed to admit this but in the days coming over to this game my thoughts really are parang you’re up against a powerhouse team,” shared second-year UP head coach Bo Perasol. “Iniisip mo lang is what good can you get out of that.”

And the Fighting Maroons survived another Ben Mbala flurry, who tallied 34 points and 12 rebounds. Moreover, by the end of the first quarter Mbala knocked down four triples.

How was UP able to counter it? By playing fire with fire by trying to out-shoot the Green Archers.

“Whatever happened, we didn’t panic. we were able to get back despite the torrid shooting of Ben in the beginning,” furthered Perasol.

Chooks-to-Go ambassador Paul Desiderio scored 13 of his career-high 30 markers in the third frame, knocking down five triples during that span that gave UP the spark it needed.

Desiderio’s fellow Cebuano Jun Manzo then stepped up to the plate early in the final frame, that helped buck La Salle’s attempts of a comeback while pushing UP’s lead to 11 points, 88-77, in the waning moments of the game. Manzo finished with 17 points.

As the dust settled, UP knocked down 16 three-pointers, tying the UAAP record set by the 1996 Ateneo Blue Eagles, 2006 Adamson Soaring Falcons, and 2010 UST Growling Tigers.

Brothers Javi and Juan Gomez De Liano provided UP the chance in the first half, erasing La Salle’s 14-point lead by combining 14 first half points.

Rob Ricafort also made his UAAP debut, enering the game with 7:48 left in the second frame.

For La Salle, Andrei Caracut and Ricci Rivero were the other bright spots, finishing with 15 and 12 points respectively. Former league leading scorer Aljun Melecio was limited to just five points.

UP looks for a hattrick when it faces the FEU Tamaraws on Sunday, October 1. La Salle will have a week off before taking on the UST Growling Tigers on Saturday, September 30.

UP blasts San Beda to stay in semis hunt