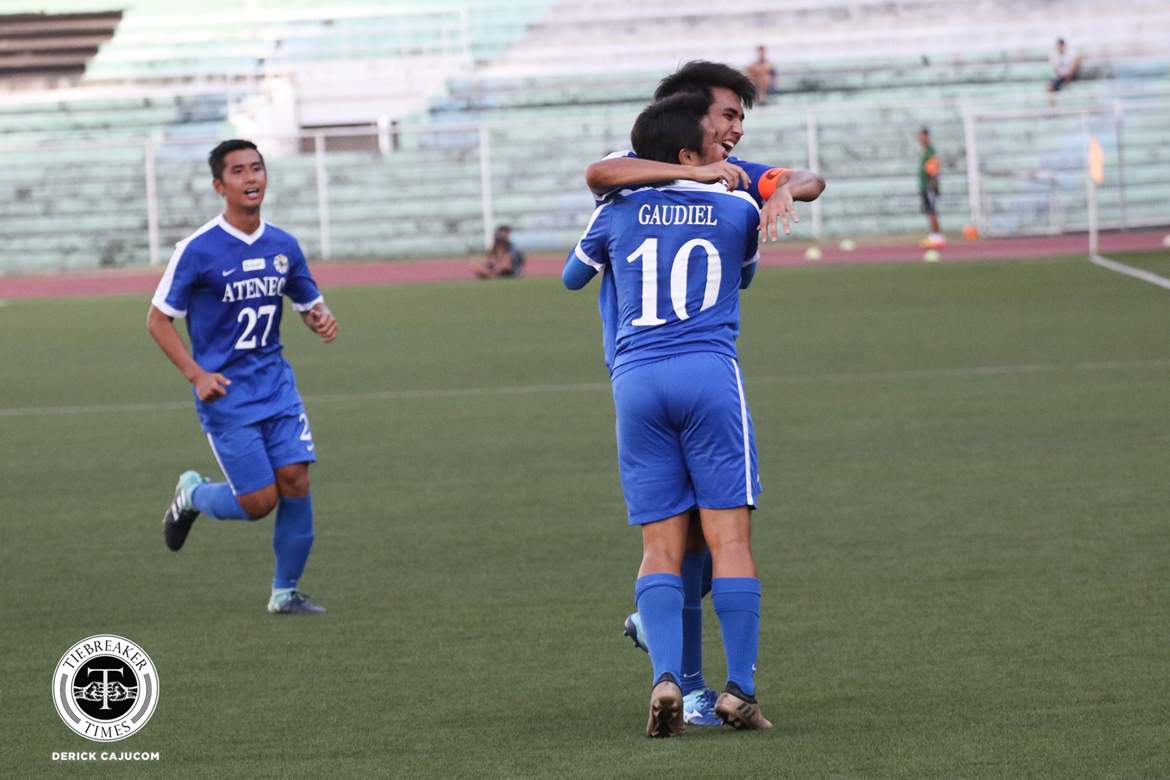 Not even the absence of a key player could prevent the Ateneo de Manila University Blue Eagles from seizing the win.

The Blue Eagles bucked center-back Jeremiah Rocha’s suspension to clinch a 2-0 victory over the University of Santo Tomas Golden Booters and move closer to the UAAP Season 80 Men’s Football Tournament post-season, Sunday afternoon at the Rizal Memorial Stadium in Manila.

Ateneo is now at second place in the standings with 25 points, enough to force a playoff for a Final Four ticket while UST is at third place with 15 points at the time of this writing.

“Target namin is we need to bounce back sa talo namin during the first round against UST. Now we proved na kaya namin yung UST. Of course may chances rin ang UST, even when we were leading 2-0, hindi pa rin sila nag-give up. We’re happy sa result,” commented Ateneo coach Jay Pee Merida.

The Blue Eagles broke the the deadlock after 13 minutes of play. Jarvey Gayoso scored his 13th goal of the season when he latched on Paolo Alilam’s pass and sped past the Golden Booters defense to shoot from a tight angle.

In contrast, UST struggled to test Arcilla and Ateneo’s defense which was anchored by Justin Dy. It was only Jayson Rafol who had a sight at goal but his attempt failed to trouble the second-year goalkeeper. That was about to change come the second half.

The Golden Booters played with more intensity upon their return after halftime. UST pegged Ateneo back to its half and Dexter Benecio, Christian Valderama and Lan Fuchigami had chances to score yet none found the back of the net.

UST crept closer. The Golden Booters defense was only tested by Gayoso’s wayward free kick as they bombarded the Blue Eagles’ backline. Ateneo conceded multiple free kicks and was luck to not have conceded a goal when John De Castro headed the ball over with the goal at his mercy.

With five minutes left, Ateneo showed its winning mentality to seal all three points. Substitute midfielder Renko Gaudiel calmly put the ball past Abraham from the left-flank to land the knockout blow against the Golden Booters.

UST shall next play Adamson University on March 22, 8:00 AM at the Far Eastern University-Diliman field. Meanwhile, Ateneo will resume its campaign after the Holy Week break against University of the East on April 5 at Rizal Memorial. Kickoff time for the Ateneo-UE game is yet to be determined.

Air Padda takes aim at poor officiating: ‘You need to be perfect as a ref’