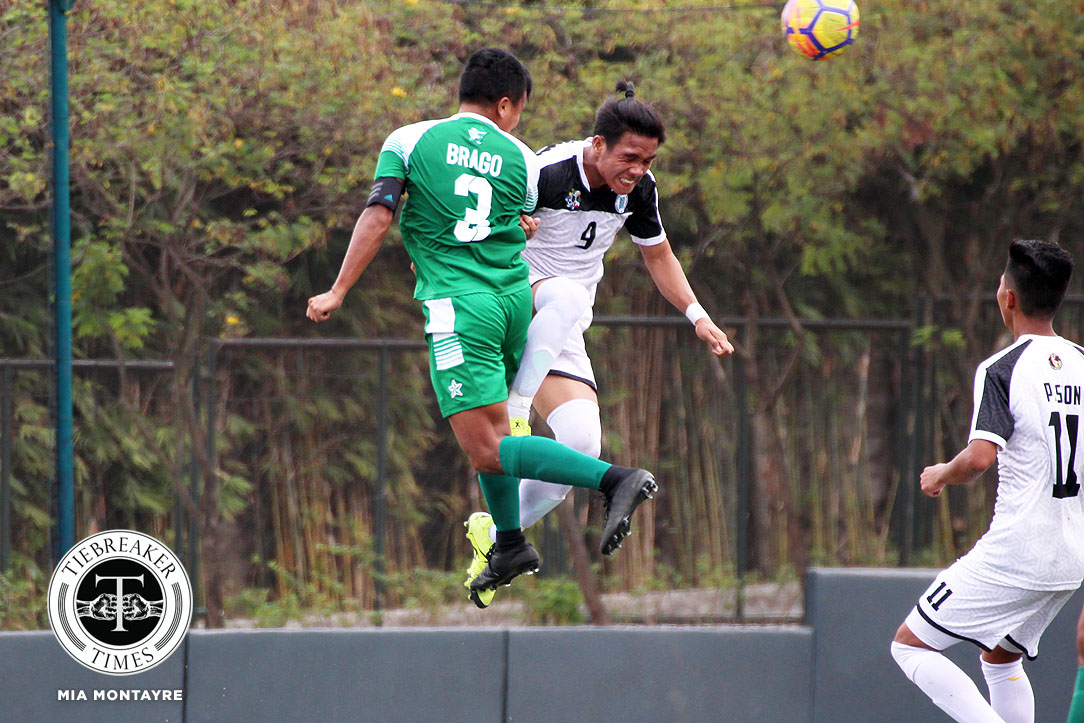 With big wins already against Far Eastern University and Ateneo de Manila University, UST added another team to its list after a 2-0 victory over the De La Salle University Green Archers this Sunday afternoon at the FEU-Diliman field.

“We started the game in the first half very good. We scored from a cross na ginagawa namin sa training session and a free kick. But the second half is disappointing kase parang hindi na kami lumaban eh. Parang nawala yung strength namin eh,” commented Marjo Allado after his side’s latest win in the UAAP Season 80 Men’s Football Tournament.

The Golden Booters oozed with confidence in the game and they did not have to wait long to score one past the Green Archers defense. After UST goalie Zaldy Abraham made a fine save to deny La Salle striker Chris Lawless from scoring, Allado’s men got the lead when Dexter Benecio turned in a cross from the left flank just four minutes into the game.

UST then saw its lead double at the 31st minute. The Golden Booters won a free kick in the Green Archers half which was taken by Marvin Bricenio. Bricenio forced a good stop from La Salle goalie Paeng de Guzman, only for Steven Anotado to rebound the ball into the net.

If things were looking good for UST, then the same cannot be said for La Salle. De Guzman had to be replaced by Kerbi Almonte due to injury and the former was stretchered off the pitch. When play resumed, La salle struggled to out up any offense as UST’s runs forced the former back at its half.

READ  No pressure for John Lloyd Clemente to make waves

Contrary to the first period, it was La Salle that upped the ante once play resumed in the second half. Mathew Custodio and Yoshi Koizumi replaced Mauro Acot and Lorenzo Perez and the changes made the Green Archers more potent in attack.

Abraham, though, was rarely troubled for all of the Green Archers’ huffing and puffing as attempts from Jed Diamante and Custodio went way over the UST goal. Even set-pieces weren’t any use for the Green Archers despite their height advantage over the Golden Booters.

The Green Archers realistically only had one good chance in the half when Marcus Garcia beat the Golden Booters’ defense only to shoot over and sum up La Salle’s bleak afternoon. In the end, UST deservedly emerged 2-0 winners over La Salle.

La Salle and UST shall next play on March 1 at the Rizal Memorial Stadium in Manila. La Salle shall go up against University of the Philippines in the 9:00 AM match while UST will play University of the East afterwards at 4:00 PM.

Last Sunday’s third game saw National University get its second win of the season with a 2-0 victory over Far Eastern University.

Second half goals from Sean Epili (52nd minute) and Zyrus Capellan (67th minute) allowed the Bulldogs to prevail over the Tamaraws.

Rizal Memorial shall host the next game of both the Bulldogs and Tamaraws. NU will play La Salle on March 3 with the kickoff time yet to be determined while FEU will play Ateneo de Manila University a day later at 1:30 PM.