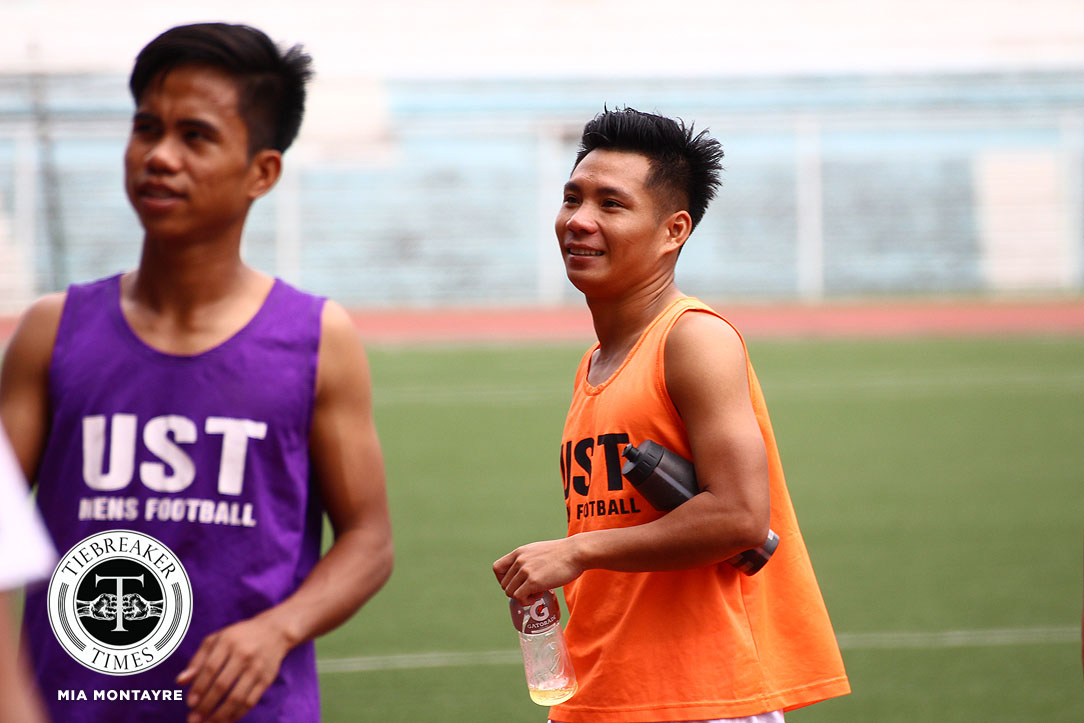 Dexter Benecio scored twice to help the UST Golden Booters to a 3-0 victory over the Adamson University Soaring Falcons, Thursday at the Rizal Memorial Stadium in Manila.

“Good for the result of the team. We had a lot of chances eh,” commented UST mentor Marjo Allado, as his wards got their second straight win in the UAAP Season 80 Men’s Football Tournament.

The Golden Booters were clearly a gulf ahead of the Soaring Falcons right from kickoff. The España school constantly bombarded the Adamson goal with chance after chance, and it was only a matter of time before the Golden Booters broke through.

It was after 17 minutes of play that UST finally drew first blood. Renz Gumban went past the Soaring Falcons’ defense at the left flank and crossed the ball towards Benecio,, who camly scored his first goal of the match.

If Benecio’s first goal was from a fine passage of play, then his second showed his predatory instincts. From a UST corner kick, the right-winger turned in a loose ball to double the Thomasians’ lead in the 41st minute.

The circumstances were already bad for Adamson, and they got worse in first half stoppage time. Jusuel Pilarca threw a punch at a Golden Booter and was rightly sent off for his actions. Already 2-0 and one man up, things were rosy for UST.

Any chances for an Adamson comeback were thwarted halfway through the second half. A cross from the returning Steven Anotado was duly converted by Bricenio in the 68th minute to seal all three points. It was Bricenio’s fourth goal in two games, and it was a just reward for his efforts throughout the match.

UST finished the contest as 3-0 victors over Adamson as the Golden Booters started the season with back-to-back wins. “It’s a big win for UST. Sana tuloy-tuloy lang ito. One game at a time,” added Allado.

The Golden Booters shall go for their third win against the National University Bulldogs on February 15, 2:00 PM, while the Soaring Falcons hope to bounce back versus the De La Salle Green Archers on February 11, 1:30 PM. Rizal Memorial will host both games.

Every game is a playoff game now for Ginebra, says LA Tenorio