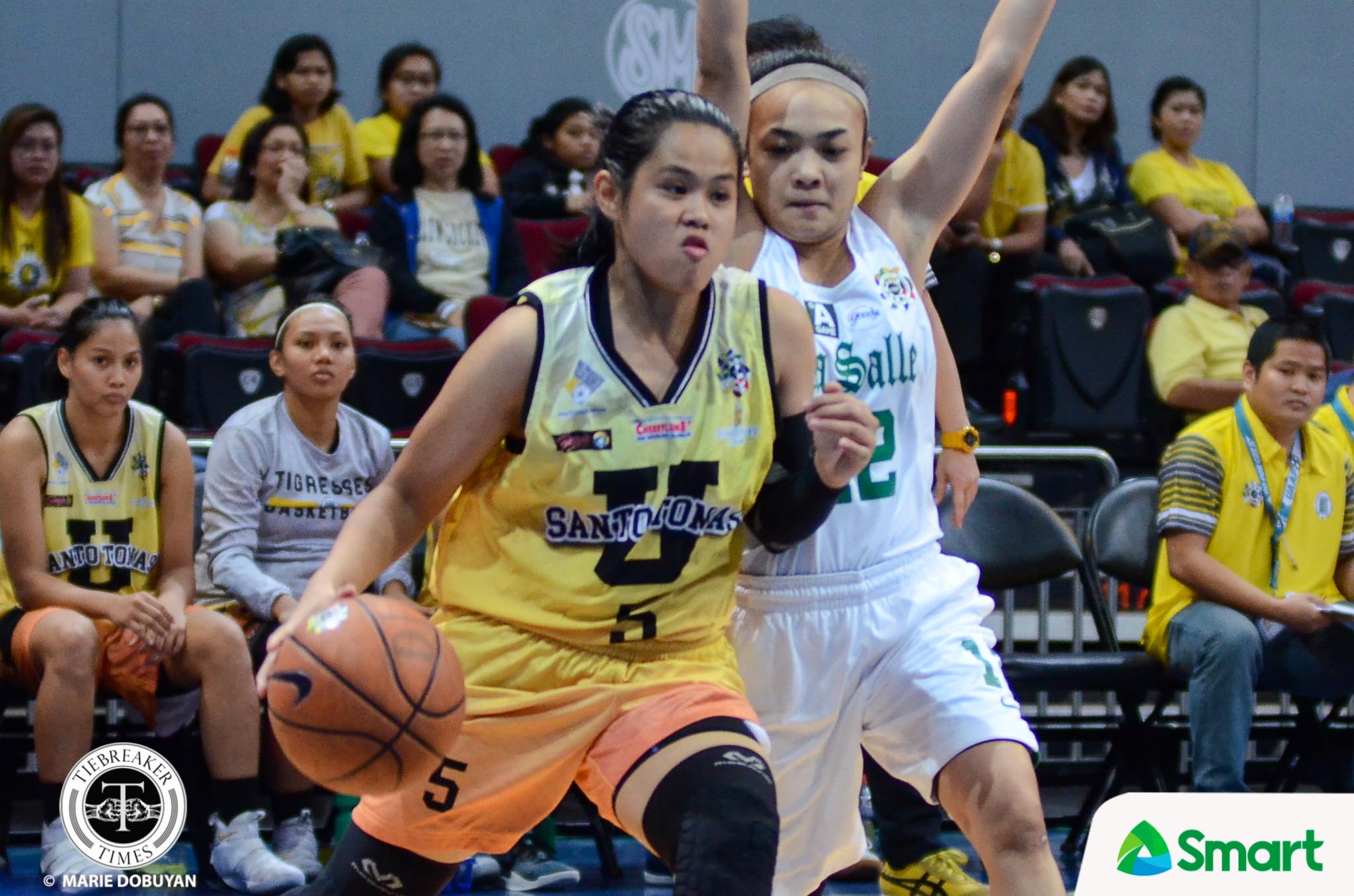 A win is a win as they say

This time around, the University of Santo Tomas Growling Tigresses were able to regain their bearings after a slow start, turning back the De La Salle University Lady Archers, 68-56, Wednesday morning at the SM Mall of Asia Arena. However, the win drew a bad review from head coach Haydee Ong.

With 49 ticks remaining and La Salle having cut a once-19 point lead down to just nine after two free throws by Joehanna Arciga, Ong sued for time. And in a heated timeout, the former head coach of the women’s basketball national team broke a whiteboard to get her message straight.

“In the last quarter, I was very disappointed that we gave up a lot of free throws and offensive rebounds to La Salle. If the game was close, I don’t know what will happen,” shared the second-year Growling Tigresses head coach, “I was just airing my frustration to the girls, I want them to finish strong all the time.”

The Growling Tigresses were able to halt their bleeding afterwards. Safe to say, they were able to get what their coach was telling them.

“We had two stops after that so I think they got the message,” quipped Ong.

The win lifted UST’s card to 8-1, winning their sixth straight game after losing to the NU Lady Bulldogs last September 20. La Salle, on the other hand, dropped to 2-6.

After a slow start that saw them face an 11-0 deficit to start the game, Anjel Anies provided the spark for the Growling Tigresses. Kikay Gandalla followed Anies’ lead in the second frame that saw UST gain the lead for good.

“Jhenn [Angeles] is scouted na, most of the teams are giving her a difficult time even touching the ball. I told Anjel that she has to step up, also the other guards,” shared Ong.

Angeles came alive in the third frame, scoring 10 of her 14 points during the quarter that saw UST gain a 19-point lead.

Arciga paced the Lady Archers with 20 points on 7-for-10 shooting to go along with 16 rebounds. Bernice Paraiso added 11 points and eight rebounds off the bench.

La Salle went just 1-for-11 from downtown, with lead gunner Khate Castillo limited to just five points on 2-for-8 shooting. UST knocked down seven triples in the contest.

“This game is in preparation for UE,” Ong closed.

UST will next face the third-running University of the East Lady Warriors on Sunday, October 22, at 10:00am. La Salle, on the other hand, face arch-rivals Ateneo on the same day at 8:00am. Both games will be played at the Filoil Flying V Centre.