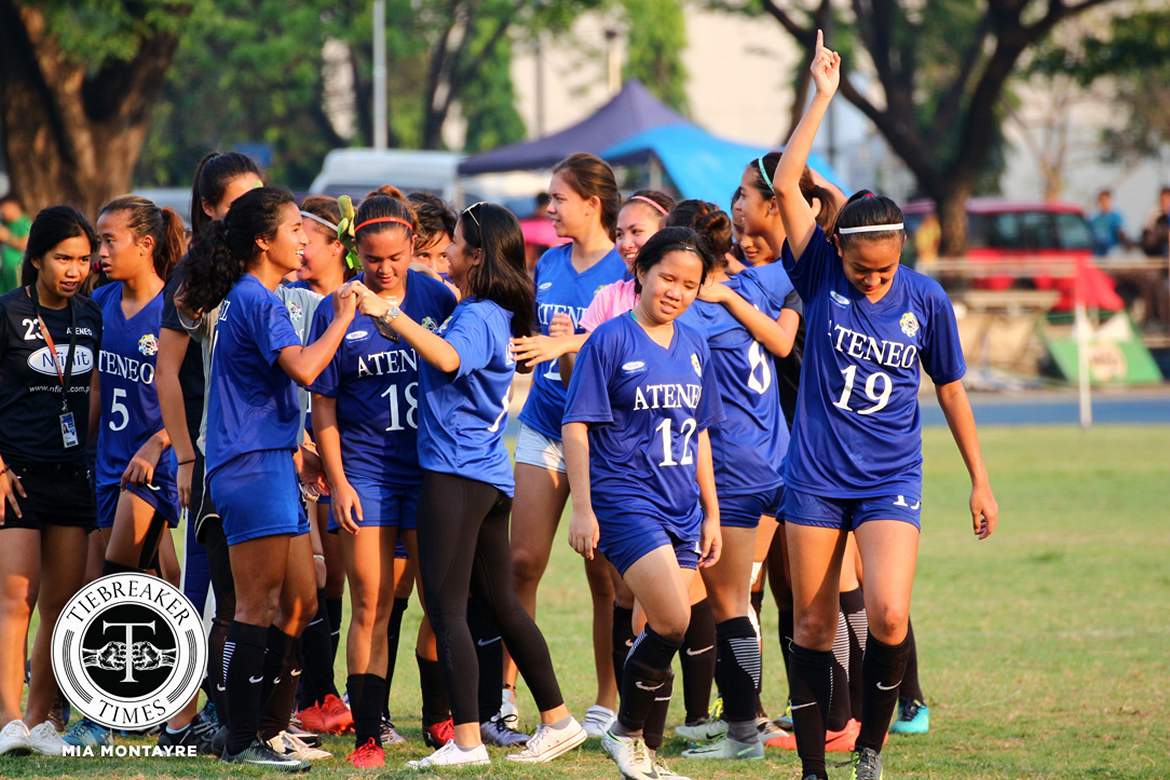 The Lady Eagles survive a thriller!

A ticket to the UAAP Season 79 Women’s Football Tournament Finals is still on the cards for the Ateneo de Manila University Lady Eagles after they survived a 3-3 thriller against then-defending champions University of the Philippines Lady Maroons.

Cam Rodriguez, Pam Diaz and Bea Velasco scored a goal each to seal the deal for the Blue and White today at the Moro Lorenzo Field, as their counterparts’ markers from Eloisa Malmis, Alyssa Ube and Bling Perez weren’t enough to salvage the win.

“Balanced na medyo happy and of course siyempre nakakadisappoint kasi we’re leading 2-0 in the first half and then simple foul nag-call ang referee… And then second half we lead by one, tied na naman,” reflected Ateneo coach JP Merida.

It took only two minutes for the deadlock to be broken. Ateneo skipper Rodriguez raced through on goal and shot past State U goalie Nicole Adlawan to give the Lady Eagles the dream start they wanted, in practically their first attack.

Rodriguez was a constant thorn in the side of the Lady Maroons defense. The fifth-year forward ran circles as her pace and creativity brought danger every moment she had the ball. Rodriguez compounded the Lady Maroons woes when she delivered a cross from the right flank which Diaz directed home in the 9th minute.

UP had it all to do at the this point. Only a win would allow the Lady Maroons to leapfrog the Lady Eagles to third place, and a potential ticket to the Finals provided the De La Salle University won their last game against the University of Santo Tomas. However, everything looked slim for State U.

Somewhat against the run of play, UP found a way back. The Lady Maroons drew a freekick close to the Lady Eagles’ box. The Ateneans then failed to clear their lines properly and Malmis rebounded the ball into the net.

Ateneo may have had the 2-1 lead at the break, but question marks rose over whether or not the Lady Eagles were capable of defending their advantage. In contrast, UP had to pull off their biggest win yet this season if they wanted to defend the crown.

Rodriguez should have put the nail on State U’s coffin halfway through the second half, only for her to watch her shot be cleared off the by Lady Maroons defender Louise Ruiz. That miss came back to haunt Ateneo, as UP leveled the scores in the 65th minute when Sta. Clara headed in another set-piece.

At this point, all hell broke loose. Both teams played frantically in search of a winner. Ateneo thought they had it when Velasco’s shot was narrowly denied by the crossbar and eventually cleared. Velasco, though, more than made up for it in the 82nd minute.

That should have been game, set and match for the Lady Eagles. However, as seen in their previous game against the UST Lady Booters, the Ateneans had trouble holding the lead. Lackadaisical defending hounded Ateneo, which only added problems for the Katipunan school.

UP scored another equalizing goal when skipper Cristina de los Reyes’ pass was turned into goal by substitute Perez come the 86th minute. Nonetheless, Ateneo got the point they needed to secured third place with the 3-3 draw. As for UP, their title defense came at a premature end.

Ateneo end the elimination round with 8 points in third place. The Lady Eagles need La Salle to beat UST to force a playoff with the España school on May 4 at the Rizal Memorial Stadium, while State U finish the season with 5 points in 4th place.