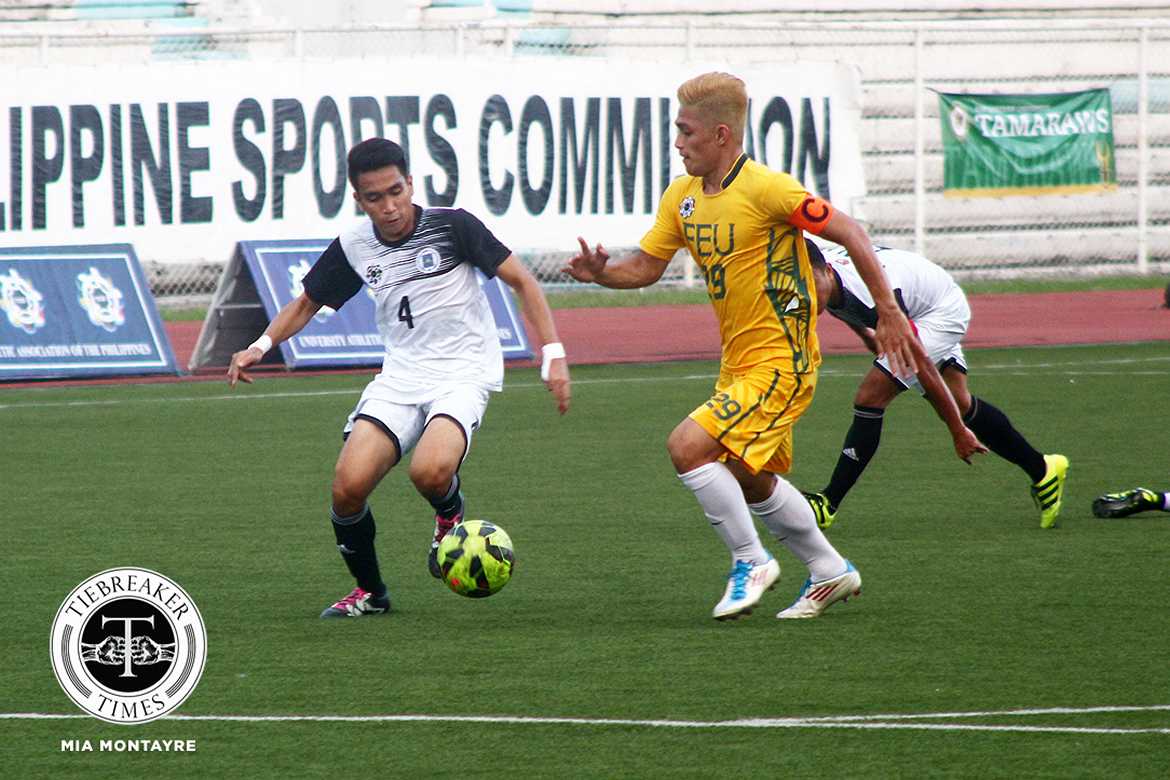 The University of Santo Tomas Golden Booters may have already secured a place in the UAAP Season 79 Men’s Football Tournament after they won 2-1 today at the Rizal Memorial Stadium in Manila.

Kenneth Tuzon’s late goal sealed a vital comeback for the Thomasians after he followed up Renz Gumban’s equalizer. In contrast, Mark Arranguez’s opener failed to light up the Far Eastern University Tamaraws after their loss last Thursday.

“Sana pasok na kami today,” beamed a pleased UST coach Marjo Allado after the game. “Pero regarding the game, we have lapses eh. Our wingers parang hindi nag trabaho pero yung pinakaimportante is nakagoal kami so we have to address the deficiencies.”

It was FEU who drew first blood in a competitive first half. Arranguez unleashed a fierce shot that hit the Golden Booters’ crossbar and bounced into the goal after 24 minutes of action. Moments later, the Tamaraws thought they had doubled their lead, but the linesman raised his flag for offside.

With the alarm bells ringing, the Golden Booters doubled their efforts to level the scores. It took a while, but UST equalized in the 35th minute after Gumban shot past FEU goalie Dave Parac following a Conrado Dimacali assist.

Upon the game’s resumption, it was FEU who dominated the proceedings. Despite being on the back foot, the Golden Booters defended well enough to render the Tamaraws’ offense impotent. FEU senior Paolo Bugas’ tame shot was routinely caught by UST goalie Zaldy Abraham, as the latter rarely worked in the period.

With the clock running out, UST got a sucker punch that moved them closer to a post-season ticket. The Golden Booters drew a free kick deep in the Tamaraws half, and the ball was laid off to Tuzon, who put it in the back of the net in the 88th minute.

UST eventually prevailed 2-1 against FEU, which could be enough to book their Final Four ticket provided the De La Salle University-Manila fail to win against the Ateneo de Manila University later this afternoon.

On the other hand, FEU dropped their second straight game, as their momentum heading into the Final Four has evaporated.

UST (20 points) shall go up against La Salle, while FEU (22 points) will end the elimination round against Ateneo at 4:00 PM. Both games will be held at Ateneo’s Moro Lorenzo Field on April 20.